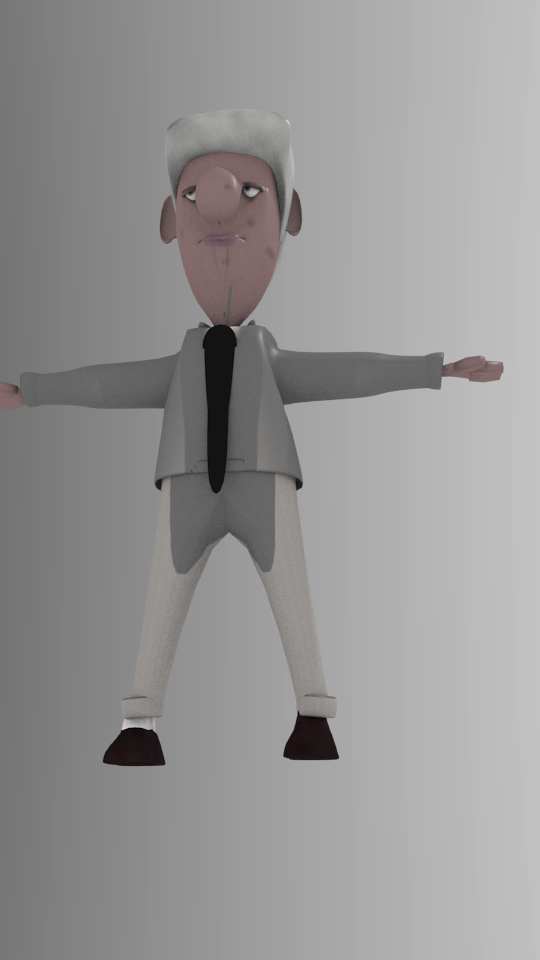 for a kinda forrest gump 3d movie im working on :)

The 3D in this piece is really well done, and I like the uniqueness of the art style (it almost reminds me of Team Fortress 2). It almost looks like a plastic figurine. I'm not sure if that's what you were going for. It could use a little more color, though.

A background of some kind would have made this more pleasing to look at, as would fixing the point of view so that the model is in the center of the picture (or at least so that we can see the whole thing.

Overall, it's a nice model, but some mistakes were made in the model's presentation.

Well, the 3D looks quite good here, but as others have stated, everything looks so "plastic like". Maybe it's just because nearly everything is so grey in this picture; the background, the suit he's wearing, the hair... only different colour we can see are his shoes, his tie and his skin. Colour up your life, man! ;)

Also as others have stated already, the lightning is really off. It DOES look like that guy has wet himself. Oh well, maybe he saw something that really scared him so it was just some kind of... natural reaction.

Last thing I can complain about is that the character is off center so much. His right hand reaches out of the canvas, which does look a bit strange.

yes it is a sock and they are rolled up, also i think hes just bad at putting pants on

An image of a man from an unusual camera angle, though I would say I am quite surprised to see this particular angle being employed. I'd have gone above the level plane of the eye-line, rather than so far below it.

Is the character in question fitted to a rigid frame? It looks like you're preparing to crucify him, or he's doing star jumps, which his suit would make me believe he was not doing... A more natural pose would have helped you here, studying various catalogues or clothing websites could give you an idea of how or where to pose the character.

Lastly, you really do need a background, as otherwise, it looks like this guy has been manufactured in a factory of some sort, which does take away from the image itself.

you do know about Wil-Co don't you?!

No, really! He looks like he's drooling! I see a little blue drip going down his face. And I do have to agree with SCTE3, he does look like he wet himself.

The plasticness of this art seems like it doesn't work. I understand that's how a lot of 3d art is. But try making it a little more realistic, please... I also don't particularly like how the whole thing is practically grayscale except for the skin. While admittedly, the character could only have gray clothes on, it's kind of boring when it's just all gray. The hair also seems like it's smeared with ash, and the pants turning up only in the front seems odd.

On the plus side, the textures you have are incredible, and the only nitpicks I have are the ones I said above. (not counting the ones that SCTE3 and Soap said already) It is really good 3d, even if it's a bit... odd in looks.

Hope this is helpful to you!

Looks kind of like they are getting ready to dance anyways or like they were possibly in the middle of doing a dance move anyways. Kind of makes you laugh a little bit anyways. Still nice for a full body 3D drawing too.

The background just seems to be gradient shades of black, white, and gray anyways.

The person himself seems to have a stern facial posture as if nothing was going to phase him. That or he has that disease where it is impossible to make facial motions what so ever.

The outfit reminds me a bit of Forest Gump and that person on the box art of Saturday night Fever. It looks really nice though except for maybe in his crotch area. Looks kind of like he might have wet himself sadly, wonder why. If not maybe it's just shading and I am not seeing it that way.

Overall, looks pretty cool, I guess all that needs to be worked on is shading a tad bit anyways.

he didnt wet himself D: