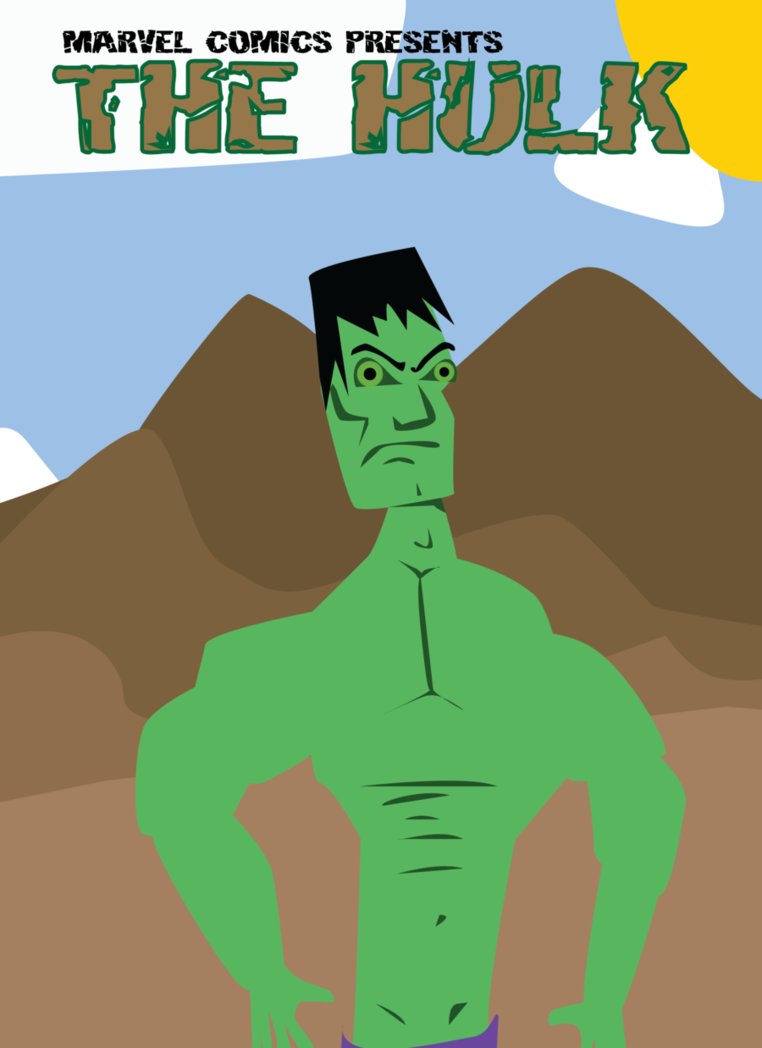 I started this as a zombie but changed it into the hulk.

It's okay, but not really something that I would favorite. It seems to have an odd relation to the art used in : The Game : which was a really nice art design.

Colors - The colors were alright, seemed to be okay when related with the character, and the background he was standing in front of, they could have been a little darker, however. The bright colors don't really compliment the character.

Character - The Hulk was always more of a bulky character, and it just doesn't seem right to use him in a light where his is muscular around the top, but very thin near his waist. You should have added more bulk to his waist area, so it would look less confusing, and more stylized and normal.

Overall - It is an okay picture, again, it isn't perfect, and your style could definitely use some refining before you considering making further art. It may just be me, but I'm not a fan of this particular style of art being used in anything serious.

In general it's an okay picture. I like that it's abstract, and his facial expression is realistic.

I like the background. Well, most of it. Having the mountains gradually change colour the more they are in the background of the picture is a nice idea. The background being abstract isn't a bad thing, and it fits with the style of the Hulk.
I do think that you could have put a bit more time in it. The clouds are too square, and the sun is drawn in a pretty amateurish way in the top-right corner. Plus, the tops of some mountains are too pointy compared to the others.

Probably the thing that sets off the painting the most is that his body is shaped very oddly. I like how you tried to form muscles by making some parts of his arms wider, but they look more like an allergic reaction than they look like muscles.
Another thing that's really odd about his body is that his arms are much bigger compared to his belly. He has no muscles at all with his lower body, and that makes him look really odd.
I don't like how the colour of the muscle lines are exactly the same as the colour of his mouth, nose, eyes and scars. This makes it unclear what exactly his mouth is, and what the shadows are.

As a whole it's an okay picture, but it's just too simple and with too many mistakes.

The Hulk got caught in a car crusher, but managed to keep his arms and chest out of it...

Sadly, the human form has very little space for vertical straight lines like you've drawn. I think that there needs to be more work on symmetry, particularly around the trapezius (neck / shoulder) muscles, which wouldn't be bulked out with such a lack of symmetry, otherwise his neck would be pulled to the side at a very strange angle.

I'd suggest plenty more time being given to study of bodybuilders, so that you can add a bit of texture, through shading and also balance the piece out. the scribbles across the torso / abdomen would usually be hard definition, as opposed to nondescript lines from side to side. Form the pectorals and the abdominal muscles, plus the obliques, to really have that stand out. Then you can use a bit of shading on the arms as well, they look weird with nothing to shade them at all.

Finally the head - it seems too thin and stretched. I get the feeling that he walked into a bar and was asked "Why the long face?", before becoming quite angry. Bulking out the face would help, by giving something to be defined by cheekbones and so forth. The expression on his face is one of surprise, as opposed to anger, so changing the angle of the eyes, where the arrows of them point more towards the nose would help, as would making the eyebrows more of a straight line, pointing in a similar way.

The background is basic, but then so were the backgrounds of earlier comics - focus people's attention on the main character and it works well.

Well tried, but not superior.

One of the main reasons why I feel let-down by this piece is that the form of the Hulk looks barely as a Hulk. If you planned to draw the real Hulk, then you should have extended the muscles. On this pic, I barely see huge muscles which are vital to make a Hulk. Even though the arm muscles seen plausable, the torso and stomach could use some widening and placing ABS (six-pack) within the stomach and a more realistic form for the torso.

The shoulder connection was not accurate (Hulk's left shoulder has an extra muscle coming out while its right doesn't). The lower left arm should look just like the right arm, and the upper left arm could use some re-forming muscles.

The purple pants seem extremely false. Remove the additional purple cloth zones that are not connected with the lower body.

If the body makes some dramatic changes, than this piece would be of higher rating.

--The Liberaten
--The Review Request Club

Thank you, I'll try with more detail in the body!

Don't know what standerds your capable of having yet, the reason for the low score is that it looks like neither a ,zombie or the hulk. Yes its. Green but id like to see improvement on detail, background, shading and intention. Mean what you set out to draw