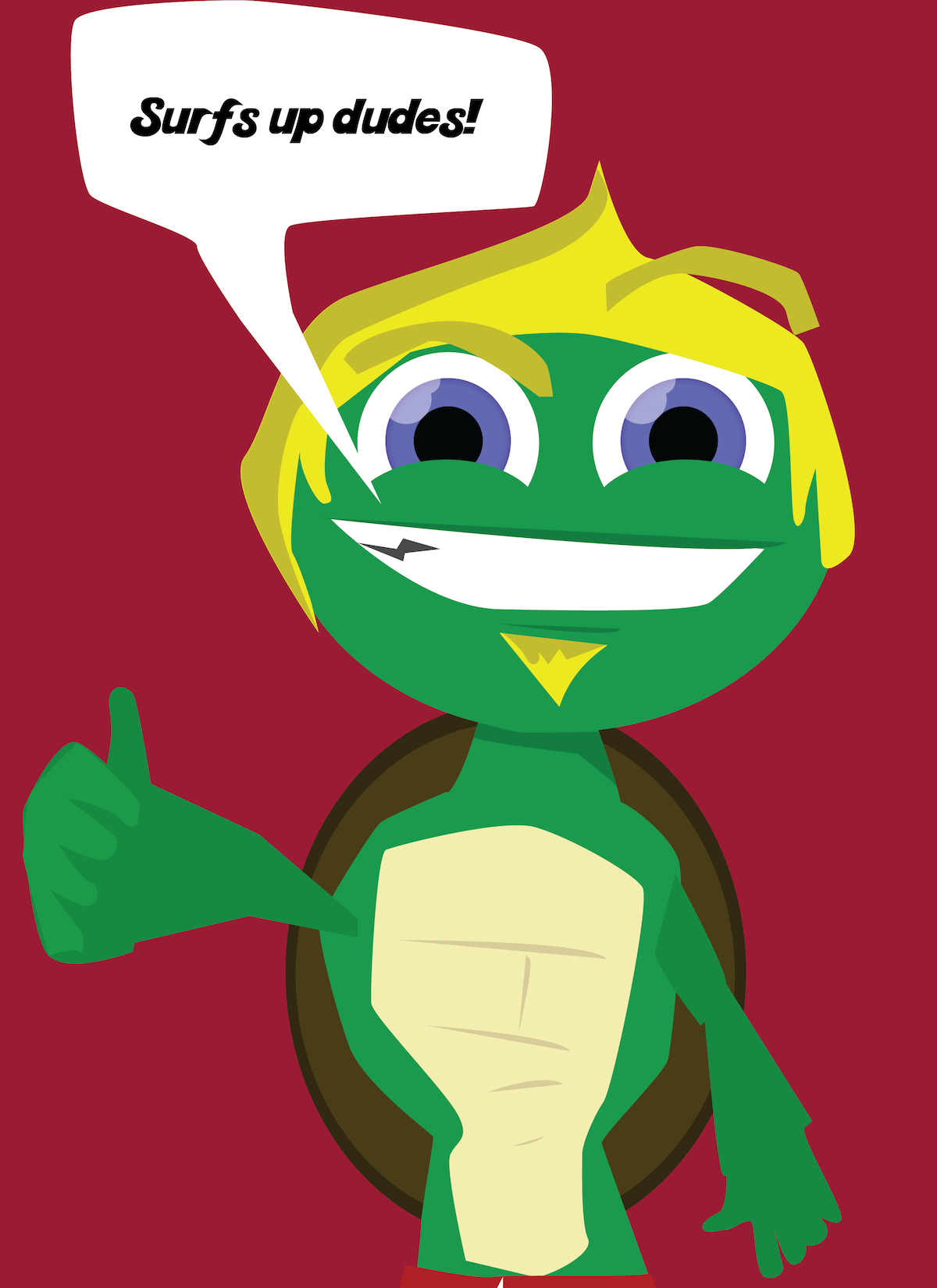 I made this in adobe illustrator! Tell me what you think!

I'm gonna start with the eyes, mouth, shell hair, which are well-drawn. There is no need to change those sections.

However, this PNG pic has little or no special attributes whatsoever. It would be smart to add many additional, minor objects to this pic. The back-ground, for example, could use a background of the beach and sea with some boats and surfurs, instead of a total red wallpaper.

On another view, the connection of the hands are not realistic. You can basically see the difference. The arms seem very unrealistic. I've never saw anyone with his/her upper arm slimmer than his/her lower arm. You should make them at LEAST the same size (in this condition, make the upper arm fatter/bigger). Also, adding muscles for the upper arms would be a good choice, since he says something related to a sport. Also, the colors are different. Convert the arm color into the normal body color.

Last, this turtle's torso and stomach seem extremely unreal. Re-construct it into a form that are equal to both sides, so you can have a good shaped torso and stomach. The stomach could also use some ABS (six-packs).

--The Liberaten.
--The Review Request Club.

Thanks, I'll add a real background better next time! I think I know another drawing I've done with one and will upload it now. :)

Well, it's all right.

It's a very very simple piece. Apart from the face, there's not much I like. The hands and fingers look really badly done, and you can easily see joints and the points where the limbs connect by the sharp edges and lines. Try to smooth these out a bit. The stomach and chest looks awful deformed, and I feel you could've been a bit more precise with the lines on his chest.

The eyes, hair and mouth don't look too bad, this easy and rather simple style could fit in a cartoon or something like that. I'd also like to mention that the body seems very out of proportions, and very asymetrical in that one side is wider than the other.

Also no fan of speech bubbles. Ever.

Thanks bubble. I'll try to try better next time. :)

Well, it's an illustration...

I'm never one that is given to the idea of putting speech bubbles in artwork, unless that's a comic of some sort, which this would not appear to be.

The face looks good, with the shapes being used well and creating a good, if basic face for the turtle. I'm not sure about the hairstyle, favouring that of the Teenage Mutant Ninja Turtles, thought the surfer soul patch looks to have a good effect.

What is that white triangle at the bottom of the screen? Tell me it is not where the legs meet, as it's so far off centre, to look ridiculous. With how close it is to the bottom of the frame, you could probably do without it. The shape of the arms reminds me of Popeye and the torso looks poorly proportioned and formed. With how smooth the shell looks, more effort to get the figure right for the anthropomorphism (making it look more human) of the turtle's torso, spend more time there and look to reference images, to get the definition right.

The shading is basic and nonsensical at times - the torso could use a six pack and pectoral definition, to complete the illusion, which would help the design of the torso itself. Little things can make such a difference.

The triangle is that string on swimming shorts. You know?

It looks pretty nice and colourful. Is it a real character? Because he could ertainly be one. I've never seen surf's up, so I don't know...

It's funny to see how you made an abstract illustration of a turtle. It fits the surf theme nice together with the bright and contrasting colours you used.
The face is drawn well. All aspects are clear, and I don't notice any odd looking things or anything like that. The eyes look cartoonish, which is good.

The only real negative point is that the abstractness gives a few things that look too odd IMO.
With that I mean the arms mostly. One arm is way thicker that the other. It must be four times as thick as the other in the starting point. That, and I don't like how the darker colour of the arm is overlapping a part of the lighter green of his right arm (on the left side).

That, and if you could make a background that gives more of a surf feeling instead of the dark red and it would be near perfect for me.

Thanks for the review, I guess I should've added a backgrounds. Thanks for mentioning it! :)