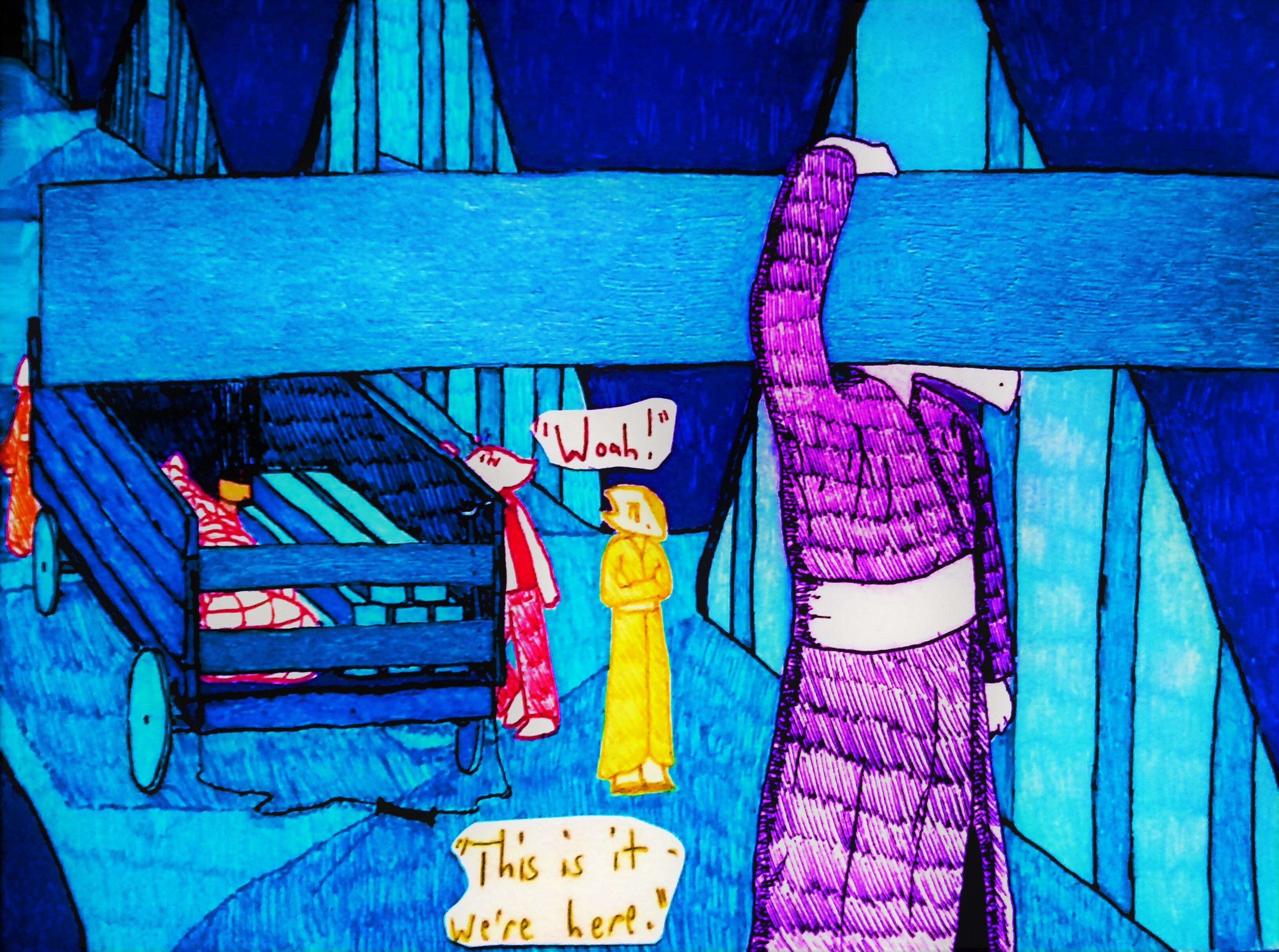 As Cole stepped past the rising vaults of wood which surrounded the small town which Kolnuo had brought him to, Cole found himself admiring the various things around him. He noted that all the houses, while very similarly constructed to the one he had been to earlier, were larger, and each cut a triangular shadow across the various paths between the various buildings.

Kolnuo followed close behind, as Cole's steps thumped against the trodden dirt ground - the ground being so packed as to appear mostly solid.

The many, many buildings instilled a certain feeling in Cole. While it would be a difficult feeling to be put into words, it is a somewhat similar - though less somber, and likewise, less intense - feeling to when he had entered the Urgan Temple for the first time; he felt himself being dwarfed by the constructions, which while less impressive than the grand pillars and bells of the aforementioned temple, still left a sizable impression on the young nomad's mind.

After a moment though, Cole realized something that he hadn't immediately noticed - there weren't very many people around! With so many houses, and such a seemingly large area, surely there would be a larger amount of anar about?

"Hey Kolnuo?" Cole asked, as he stepped side by side with the priest.

Scanning the area around them once more, Cole found that the paths were mostly empty. There was the occasional straggler, who would gaze back at Cole curiously, but their immediate surroundings suggested a much larger population than those few found would imply.

"Where is everybody? With so many houses, I'da figured you'd guys'd have kids and families comin' out your ears!" Cole said, as he made a wide gesture with his arms.

Indeed, as the imposing shadow of the Erzurin loomed large in the distance, the only signs of life Cole could hear were the sounds of distant chatter. It was, in a word - or two - most curious.

"Oh I see what you're saying," Kolnuo said with a nod and a sideways glance.

Kolnuo looked at Cole, who casted curious glances down each and every street, alley, and crossroads they came upon. With a quick breath, Kolnuo answered, "You would figure - and you'd probably be right if this was a regular town. But it isn't."

This caused Cole to cast his gaze towards Kolnuo in kind, as Kolnuo continued, "Truth is, there's kinda two answers as to why - which one do you wanna hear first?"

Cole tapped his beak in thought for a moment, before answering, "I guess the first one, since you didn't tell me what which would be what and... why, or... yeah, I think I said that right."

Kolnuo smirked as he heard the sounds of people begin to pick up. Cole hadn't realized, but Kolnuo had been directly escorting him to the second answer this entire time. Still, knowing that said answer would be coming up, Kolnuo answered as Cole had instructed.

"Well, this isn't your typical town. This town is specially built by priests who're training to enter the Innerhood, for priests of the Innerhood," Kolnuo said, his palm open in an explanatory gesture.

"Innerhood?" Cole asked, with a tilt of his head.

Kolnuo nodded, and continued, "Yes. There's four levels - sprouts, outer priests, mission priests, and inner priests. Sprouts are fresh recruits - no robes or anything yet - and those guys get transferred to the Outerhood. Outerhoods usually surround an Innerhood - where we are - and provide labor and service while they train to serve the Mother Ur. Then, once they've been around for awhile, and they've proven to be loyal and hardworking, we send them out back to the regular villages to recruit sprouts and serve their communities. Finally, once they've completed two missions - two terms of five years, each in different villages - they come to live in one of many Innerhood communities, where they focus on study, spirituality, and where they get to enjoy the fruits of their labor."

He tried to imagine this lifestyle in any capacity. To work as a servant for years? Ten years of... whatever, and not to mention, having to build all this stuff?

Cole wasn't sure how to feel about it. He guessed if you eventually got to live in the Innerhood one day, then maybe it was some kind of worth it, but... well, Cole didn't feel the urge to give up his life like that.

All the same, Cole knew from traveling with his father that if you find something about someone else's lifestyle disagreeable, unless it hurts you directly, keep your mouth shut. If you want traders to traverse the sands and carry valuable involuntary gift items with them, they need to feel some kind of welcome by your lands.

So, Cole decided on the most polite reply that he knew.

Kolnuo smirked, and replied, "I know..."

At this point, Cole realized that the sounds of people had begun to get louder. In fact, it was at this point that Cole realized that Kolnuo had led him through the town in a fairly irregular fashion. Zigs, zags, and their lesser cousin zugs, had become the entirety of their route roughly... five turns back?

And then, as they passed through another alleyway, Cole spotted it. Wood, wheels, and workmanship - the three key ingredients in a most uncommon sight within the sands of Choko. Together, those components made up what was, in fact, something which Cole had only seen a few of in his days as a desert dweller.

These things, when combined, create what is known as... a cart.

Cole ran up to the thing. It was big, blue, and big. Much larger than the few that he had seen, that was for sure - though, considering how plentiful and abundant good materials seemed to be in this forest, perhaps that shouldn't have been so surprising.

"Woah!" Cole said as he peaked over the top, and found bags upon bags of goods, large beams of wood, and baskets of sticks. The whole thing almost left Cole salivating at the sheer amount of potential goodies for the taking - when the time was right, of course.

"This would be the second reason there wasn't anyone back where we entered," Kolnuo said, as he turned to face the street.

Cole, who found that his eyes weren't ready to stop tracing the curves of each bag of unknown treasures, absently replied, "Oh yeah - why's that?"

In response, Kolnuo let out an amused puff of air, and answered Cole's question with a question.

"Have you ever heard of a little thing called a market?" Kolnuo asked, expectantly.

Cole finally glanced back at his priestly counterpart, before he replied, "Yeah, sure."

The memory of learning about the Kotsko canyon trading hubs resurfaced in Cole's mind, and he wondered where Kolnuo was going with this.

And together, they both admired as at just the end of the street, where it met with yet another road itself, were various anar of all colour wandered with goods, materials, and tents. And together...

... they both walked deeper into the heart of Woodside.