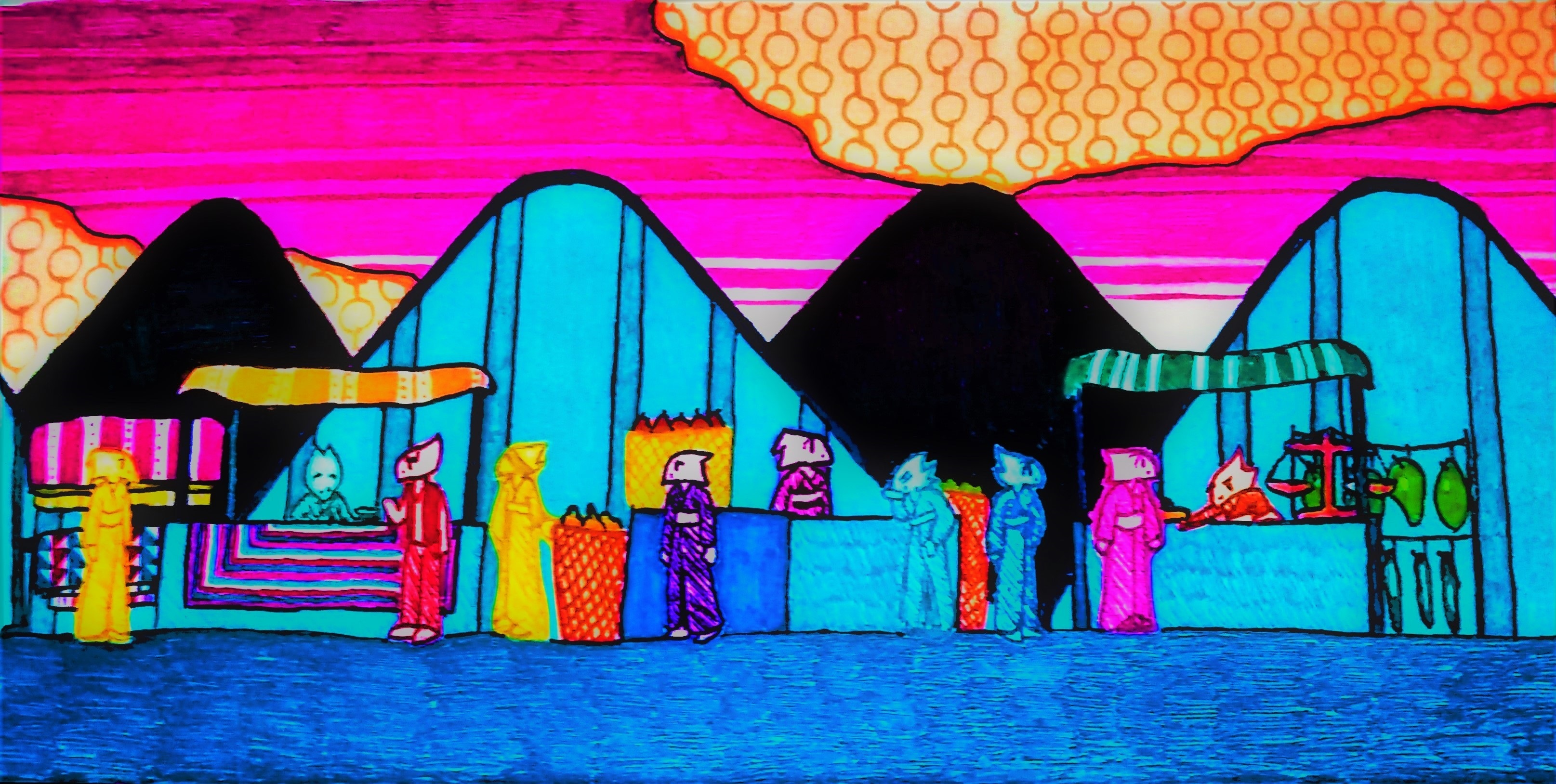 The bustling street of the Woodside market buzzed with the rampant sounds of trade - merchants and customers talking, haggling, and trading goods.

The entirety of the street was lined end to end with stalls, and the occasional cart. With a few minor exceptions, each of these stalls was fitted with a coloured tarp which held a distinctive stripped pattern of one variety or another. Though it wasn't exactly clear what the purpose of some of the more general stalls and carts were, for the most part, each one had goods out in the open to display and attract customers. Deducing that a fruit stall traded in fruit was not hard when the fruit of the fruit stall was displayed out in the open - presumably, for anar in the market for fruit, or fruit adjacent needs.

As one could imagine, Cole found himself elated to be surrounded by so much potential stealth-enhanced nonconsensual gifts to obtain.

Each stall that he saw held something in abundance which Cole hadn't seen since his days raiding traders in the desert sands. Really, it almost felt nostalgic for the Choki - at least, until he looked closer at the various goods, and realized that they were not at all related to the types of goods he was used to seeing transported across the desert sands on foot.

For starters, almost none of the food was recognizable in the slightest, save the ambiguous meat which hung from hooks around particular stalls with green tarps. The fruit, the vegetables, and even the minor cuisine he had seen being hocked for minor goodies were completely unfamiliar. It was to be expected, all things considered, but Cole couldn't help but feel that sense of discovery inside of himself as he observed the many fruits on display - especially considering the fact that Cole hadn't actually seen a fruit before until the prior night.

That was only the beginning of it though. Cole and Kolnuo were surrounded but many more anar than he had previously seen throughout their wandering of the town.

'I guess this is why everyone's out - not too many people, and the people who are here are all out and about, trading n' all that,' he thought to himself, as he found himself wandering down the market street in a mix of minor awe and somewhat less minor fascination.

To be frank, the sheer abundance had overridden his banditry instincts. Where on a normal he occasion, he likely would have found himself pocketing whatever he had pleased under the assumption that he had the skill to get away with it scott free, in this particular scenario the urge had not stricken him. In a way, this entire operation almost seemed too... well, Cole wouldn't be able to articulate the feeling. But he felt a warmth, watching the entire community interact in this way.

Kolnuo, for his part, stood by and allowed Cole the opportunity to explore. If there was one thing that Kolnuo had figured out about Cole at this point, it was that this kid was quite the curious sort. And, seeing as how Kolnuo had spent the past half an hour being peppered by all sorts of well meaning but naive questions, he'd decided that a hands-off approach to this marketplace experience was the way to go - for both Cole, and himself

It wasn't long before a particular store caught his eye in a more gripping way than all the others. Right between a fruit stall and a stall selling what looked like... leaves? ... he found himself attracted to a stall selling something much, much, much more familiar to him.

The stall in question had an orange, striped tarp above. An anar sat behind the stall, which was decorated with a massive piece of cloth, which held a pattern of concentric rectangles in a multitude of bright colours. Behind this person, and off to the side, was a big rack upon which many tarps of a less complex - but no less fascinating - character were being hung.

This was something Cole could relate to much more easily. Remembering the traditional woven garb of the Choki - garb he had "traded" for his current Iniknok attire - he immediately felt more at ease with this particular stall. The the fabric was probably not the type he was used to, the patterned textiles were something which he felt held a little piece of his homeland in its spirit.

Cole walked up to this particular stall as a myriad of other anar wandered to and fro in their regular robed garb.

"Hey there, how's it going?" Cole said to the smiling clerk.

Thus began a conversation about weaving which Kolnuo politely declined to listen to - for the most part at least.

After all, it wasn't every day that he was able to hear a firsthand account of an apparent Voiddweller.