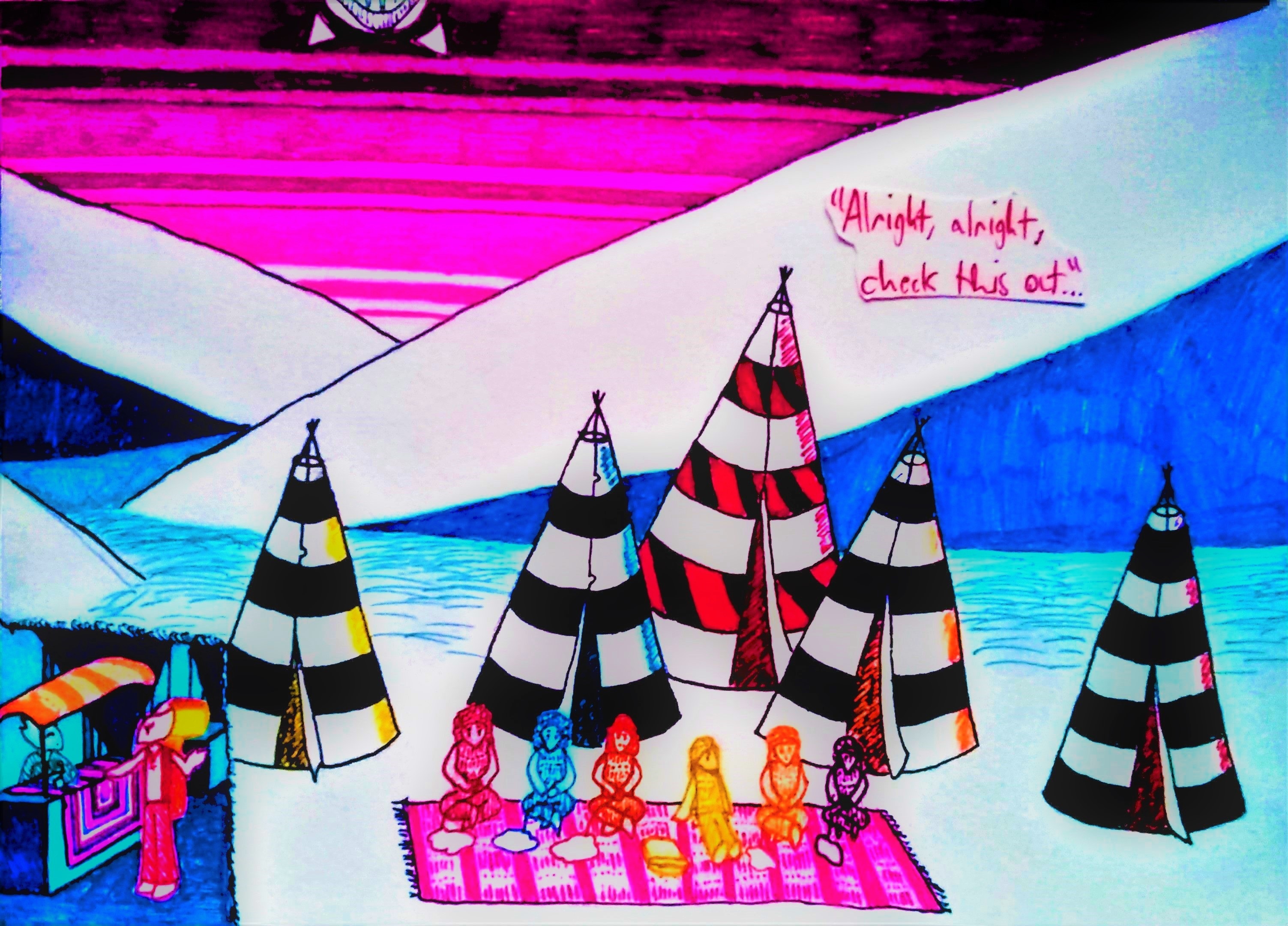 "Alright, alright, check this out..."

Gizok sat tranquilly behind his stall within the Woodside street market.

He watched the familiar sight of various priests walking to and fro - a strange organization to the merchant, at times, but well mannered and pleasant. It was a sight he had seen time and time again in his travels, this shuffling of robes and exchanging of goods.

While Woodside certainly wasn't as exciting as some of the cities on the coast of Lake Ziziz, the calm marketry of this smaller town had it's own type of charm. Indeed, sometimes when the noise, the smells, and the situations in places like Uzeks or Lakefront got to be a bit too much for Gizok, a short trip to one of the smaller priest settlements was just the remedy needed for a tired soul.

Business hadn't been particularly busy that day, unfortunately. While he had managed to exchange a few rugs for some interesting items - and in fact, was quite happy to have acquired a bottle of ground nis for a smaller item of his - he had found that his stall was having quite a slow run on this parti-

Gizok, for his part, shook his head at the interruption. With a smile - both on his beak and in his eyes - he replied with a line that he had said countless times, over countless transactions, and in... a countable number of places which shall not be counted here.

"Greetings! I am the Great Gizok of Gosgalil - master of mats, fashioner of fabrics, and consul of commerce! How may I help you?" he said, happy to have a customer.

Cole let out a low whistle, and replied, "That's a pretty catchy intro you got there - pretty cool!"

Gizok nodded in appreciation, with a small, "Thank you," before they observed the individual standing before their stall.

The person in front him was dressed quite strangely for the area. A vest of an unfamiliar fabric was wrapped around the fit body of an older teenager - or perhaps young adult - which was compounded by the odd pantaloons being worn by this odd stranger. While an admittedly thankful break from the incessant procession of robes which seemed to dominate the fashion of the southern lands - something even a robed individual such as Gizok could find monotonous from time to time - it did strike Gizok as incredibly foreign.

Nonetheless, knowing that he himself would be a foreigner of sorts in these parts, Gizok chose to leave it be, and instead asked simply, "Now, what can I do for you?"

"So I'm new in town," Cole said as he examined the many fabrics which hung from a rack behind Gizok, and flitted through the various weavings with his fingers. "Not from around here, y'know."

"I gathered as much," Gizok said back, pleasantly. If it weren't the clothes that gave it away, the strange accent certainly did.7

"You make these?" Cole asked, now having dropped whatever story he had planned to go into as he held the corner of a particular cloth up.

"Yes - each one is spun from sazanas, and dyed with various flowers and animal pigments," Gizok replied, always glad to see someone take in interest in his work.

"This stuff is pretty good - really really good, actually, hold on," Cole said as he examined the cloth more closely. The tightness and cleanness of the weave really blew Cole away - and Gizok could hear a soft, "Wow," underneath Cole's breath.

Gizok smiled, and said, "Thank you - you are too kind."

"No no no, this is really something you've got here. Really something - I can't even weave this good!" Cole exclaimed, grasping the rim of his own pants.

Gizok's brows went up in surprise. "You weave as well?" he asked, a small amount of excitement stirring within the older gentlemen. After all, it wasn't every day that a craftsman such as himself got to talk shop with another fellow craftsman.

"Yeah, everyone in my band did - part of being choki, you gotta know how to weave chagik," Cole said simply.

Gizok furrowed his brow at the unfamiliar words, but decided to focus on the one more immediately relevant to weaving.

"You wanna know about chagik?" he asked, before letting out a puff of air and saying, "Alright alright, check this out..."