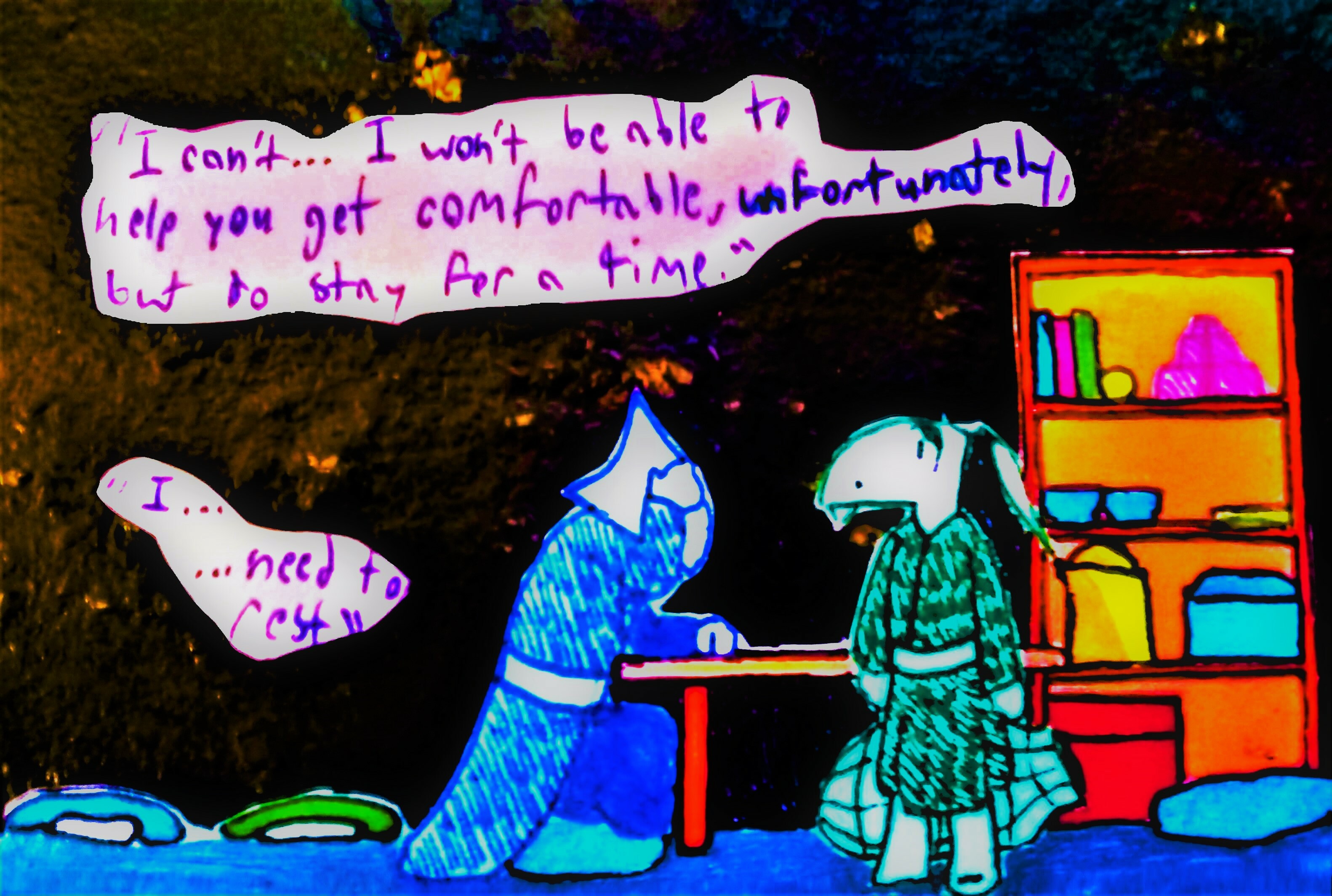 "I can't... I won't be able to help you get comfortable unfortunately, but do stay for a time."

The creature stared back in terror, pupils shrunken and eyes wide. It's eyes darted around the room as Inue held them out while she examined the mysterious organism.

Whatever it was, it was scaled - for the most part - and seemed to be wearing some kind of tunic. It had two fangs, which protruded from either side of its face, and an incredibly long snout which occasionally twitched as the creature began to squirm in Inue's grasp.

If her reality weren't in the process of melting, Inue likely would have had a number of questions. Perhaps she would even have had the presence of mind to question why - and how - this creature was fitted into her bag.

Perhaps she wouldn't have been so shocked when the reptilian individual asked her, "Wh-who are you!?"

Immediately, Inue dropped the creature out of shock. It fell to the floor with a thump and a small cry, and Inue took a step back from whatever it is that had been hiding in her fruit bag.

As she took a step back, floor beneath her feet felt like static, and continued to vibrate with a cacophony of words and phrases. The endless wash of twisting forms which had apparently replaced her walls slowly began to simplify and converge.

After a moment, the creature looked up at her. Inue, once she saw this, took pause.

It was scared. This wasn't probably wasn't just a creature. This was probably a person.

Or at least, a type of person.

'I...' she tried to think, but found her senses stopped her from doing so.

Eventually, she simply shook her head and decided to continue with her act of defiance. In her effort to ignore her failing reality, she attempted to offer an answer to this person's earlier question.

"My name is Inue," she began, shakily. "I am a priest of the Primordialist Order of the Holy Mother, and this is my home."

This caused the reptilian individual on the floor to furrow their brow. Perhaps they were not familiar with the Priesthood?

After a moment of what would be awkward silence under more ideal circumstances, the creature gave a reply in kind.

"O-okay... well, um... my name is Gadriel. Gadrielnamo Urganon," Gadriel stated stiffly, as they slowly began to get up from their spot on the floor.

Together, they looked at one another curiously. Gadriel, though admittedly quite scared of this unfamiliar individual, was at least partially interested to meet this apparent person. If Cole was anything to go off of, these strange feathered people probably aren't as scary as they might first seem.

Inue nodded her head, and bowed slightly to be polite. When she finished, she simply replied, "It is a pleasure to meet you."

Suddenly, a loud clanging sound hit her ears like a cut tree hitting the forest floor. It was metallic, like someone had dropped a twenty ton bell down the side of a building, and caused her to stagger back and close her eyes.

The sounds of the many voices began to fade, and as she began to open her eyes, she saw the world of abstraction around her begin to fade in kind. Her reality had not completely resituated, unfortunately, as her walls were still lost to the void, but at least she could think.

Exhausted, she turned to the concerned face of Gadriel and said, "I can't... I won't be able to help you get comfortable, unfortunately, but do stay for a small time. I... need to rest."

With that, she sat back at the table, with her head in her hand.

And Gadriel simply looked on with worry.