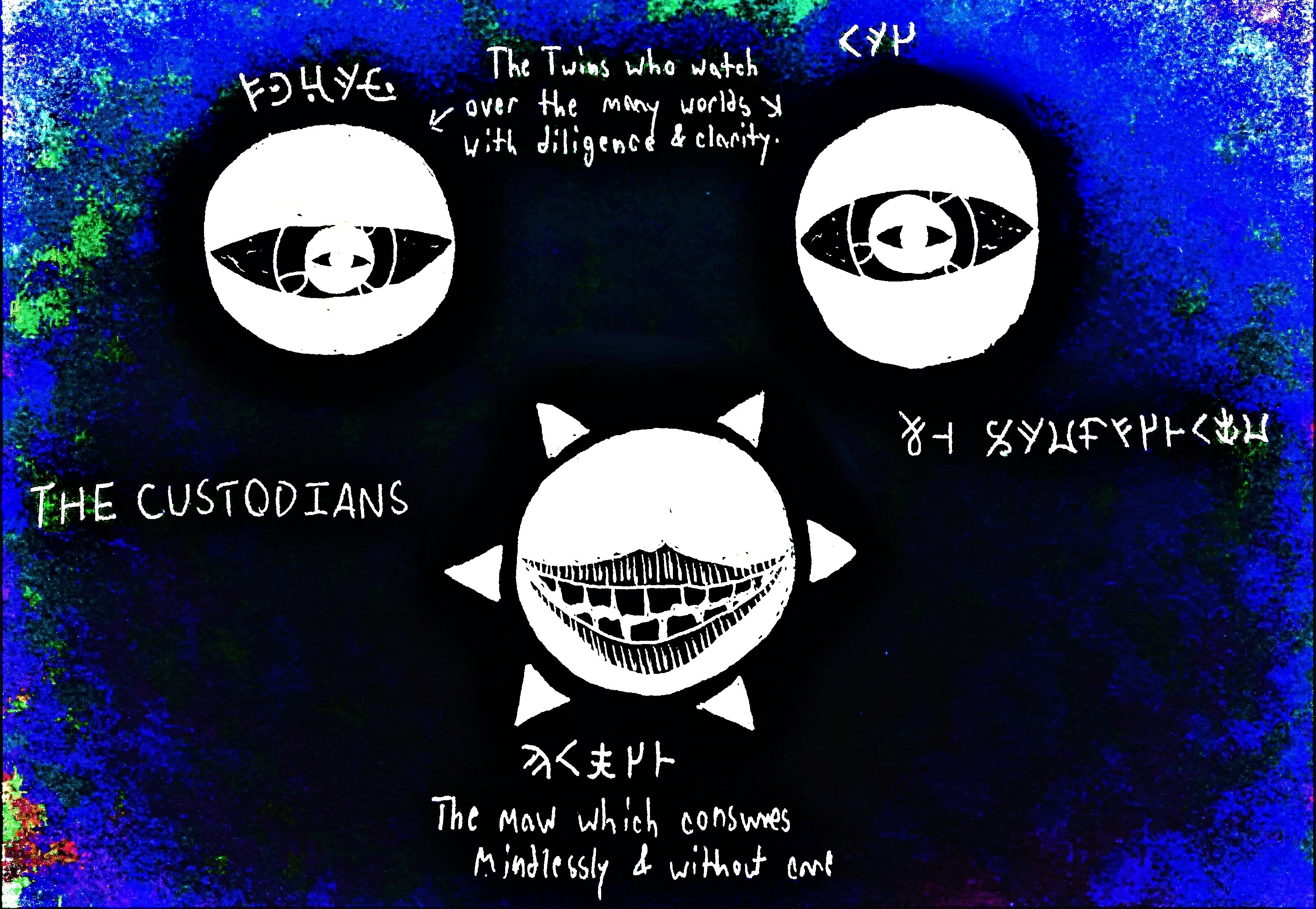 Greetings. As is tradition, every other Thursday, I post a piece of supplementary material. It is that Thursday, and this is that material.

This time around, we shall be focusing on the traditional religion of the Oimanon. Don't worry, I won't get too in depth - the diagrams would take awhile to get right, don't worry - but I will detail a number of points about the cosmology and somesuch of the Oimanon religion, so sit tight.

The first thing that must be established is that the Oimanon believed that the universe was divided into a seven tiered super structure - much like a ziggurat - which exists within a greater framework. Each of those tiers can be represented as the inside and outside of the structure, and further, each successive tier of these worlds is thought to have access to additional layers of magicka. Hence, the Oimanon knew of seven types of magicka, and believed that they lived on the sixth tier - the void-like super entity which encompasses the universe is thought to be the very primordial base part of magicka, and thus that makes up the first branch.

Existing separate from this structure, within the broader voidian framework, are these three deities shown above. They are two moon gods, and a sun god. Obzur, Aud, and Maudi and the three entities which make up the combined faculties of the god which they believe in. In reality, it is thought that there is only one true prime originating god - Metati - but that said god is transcendent and unknowable, and so can only be experienced in fractional sections. In much the same way a two dimensional being would only ever be able to experience a two dimensional cross section of a three dimensional being, the various gods and deities are thought to be the three dimensional cross sections of a higher being, and thus while distinct as far as you or I are concerned, are really all linked in a much deeper and a immediate way than might be readily apparent.

Each of these gods has a number of agents - also identified as gods, but of less significant portion of Metati - and each of these agents is in possession of a suffix-honorific title which denotes their status. Ezuriel, for instance, is the god of pigment, and their status can be seen in the suffix -riel, which denotes an intrinsic link to one of the above moon or sun gods. Each of these gods is tied to one of nine agents in every level of existence - three for each - whom act in a more direct way to shape the world and influence the events therein in accordance with either Maudi, Aud, or Obzur's will, and thus by extension, Metati's will.

Now, each of those three main gods ultimately represent the trifection of existence - negative, positive, and inert - and collectively act as checks against one another. At the end of every day, it is said that the blood that was spilled across the world in that timeframe flows to the bottom of the world, where it descends from out the world through a hole which spans every plane of existence. This flow of blood is said to feed Maudi, and thus, Maudi acts the cleaner, renewer, and guide of the dead. However, Maudi does not maintain a conscious will - none of the three main gods do - and so if left to it's own devices, it's nature would urge it to cross all the life in the world into the primordial void from which life springs in the first place.

As counter to this, Obzur is said to chase away Maudi every night, and watch over the land with it's cold gaze. Obzur is the primary reason that life takes the ordered form that it does. Where Maudi is made of a hunger for life, and a desire to take it, Obzur wishes to watch life grow and prosper. Unfortunately, a watched clock never ticks, and likewise, a watched life does not grow. Obzur does not want the life on the world to die, and it does not want life on the world to suffer, but it cannot affect change directly to enact this. Due to it's nature, it cannot provide the the environment for growth that Maudi can - indeed, if Obzur stays for too long, life withers and dies.

Both of these two deities patrol each world in a cycle, with Obzur chasing Maudi from each layer of the universe, creating the night and day. However, it is said that Obzur cannot act alone. Maudi is too fast, and so would simply be able to run away and consume endlessly from one end to the other. Hence, Aud acts the observer of the lower worlds, to ensure that each and every world is in it's right place.