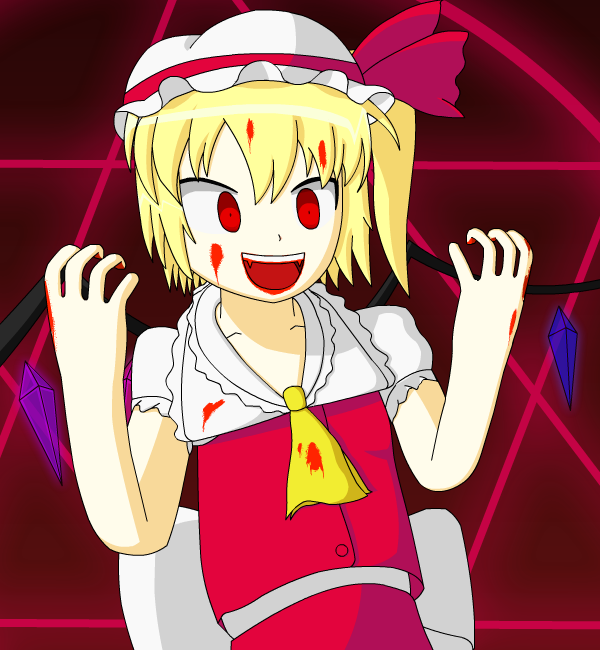 Mostly inspired by "Beneath the Scarlet Moon, The Crazed Blossoms' Severance" (EastNewSound), but also partially by "Significant point" (Innocent Key) (Both of them contain crazy laughter... I like it! :D)

So, yeah, another Touhou picture (another if you have looked through my deviantArt gallery, that is), this time starring Flandre Scarlet, the little sister of the Scarlet Devil.
After the last picture I had created, I felt the need to quickly draw some good art again. So, am I satisfied with this one?
Perspective: Not exactly what I wanted, but it's close enough. ^^
Character: I haven't found any flaws in lineart and coloring yet. :D
Background: Which background? So, yes, I like it!

I always like seeing Flandre as a cute, yet insane character, so that was what I was aiming for. I guess I caught her insane side a little better than her cute one, though. ^^;

Also: This happens when you imprison a little girl for about 495 years. Nothing good will come from it. She seriously should come out of the mansion and have fun a little more. xD;
Just don't let her near anything. I treasure my life. xD

P.S.: Tasukete means "Help me!" and appears in the InnocentKey song I got inspired by.