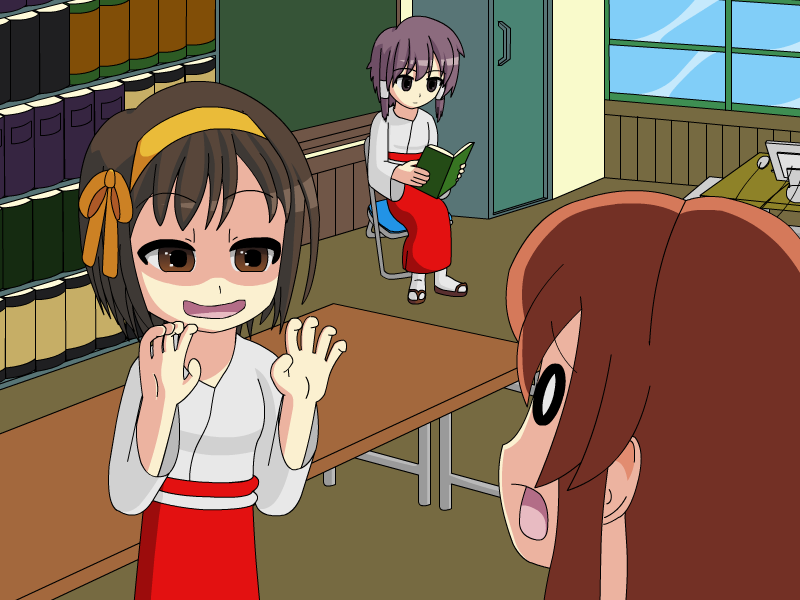 Â»It's Spring Setsubun!Â« exclaimed Haruhi as she came door crushingly into the familiar clubroom labeled as "SOS Dan". Â»Huh? Where is everyone?Â«
Haruhi looked around in the almost lifeless clubroom; the only person besides her being here was the seemingly always present humanoid interface reading her book.Â»Do you know where everyone is, Yuki?Â« The alien lightly shook her head. Â»Oh well. Yuki-chan, wear this!Â« The silent girl lifted her head, and saw the brigade-leader reaching her a red and white miko costume.

A little while later, Mikuru entered the clubroom. She noticed Nagato wearing these unusual clothes, making her feel nervous. Suddenly, the clubroom door was slammed shut and locked. Mikuru span around and noticed Haruhi, also wearing the same kind of outfit.
Â»Hey, Mikuru-can!Â« Haruhi said delighted, slowly walking towards the time traveler. Â»I'm sure you've grown tired of the maid outfit. So I've brought you something new to wear! <3Â«
Â»Nooo~!Â«

This is a picture for a contest of the Haruhis-SOS-Brigade Club at deviantArt. The topic was to make the characters of this series wear clothes from different parts around the world. So I decided to make them wear Miko clothes. Yeah.

Ah, I love indoors backgrounds. Why? Because most of the objects are fairly easy to draw, and I don't need proper shading to make clear what something is supposed to be without it looking bad. xD
And I don't have to draw trees (they are so difficult! xD)
But I digress, like always.

Actually, this picture should have been a crossover between Suzumiya Haruhi and Touhou, so Haruhi was supposed to wear Reimus outfit, Yuki would have probably either been Marisa (because of her witch outfit) or Patchouli, and Haruhi was supposed to be holding Sanae's outfit for Mikuru to wear (I always think Mikuru would make a perfect Sanae, for some reason. Probably because they both are completely useless (just kidding)). So, when the contest came up, I thought about the characters wearing normal shrine maiden clothes, but Haruhi holding Sanae's dress up for Mikuru to wear, who, in this case, was already wearing normal miko clothes, of which Haruhi has become tired to see on Mikuru, thus the change. But in the end, I dropped that idea as well, since that bit of crossover seemed forced, so this is what we have now.
(However, I could't resist giving Yuki those hairthings Reimu also has, whatever they are called. :D)