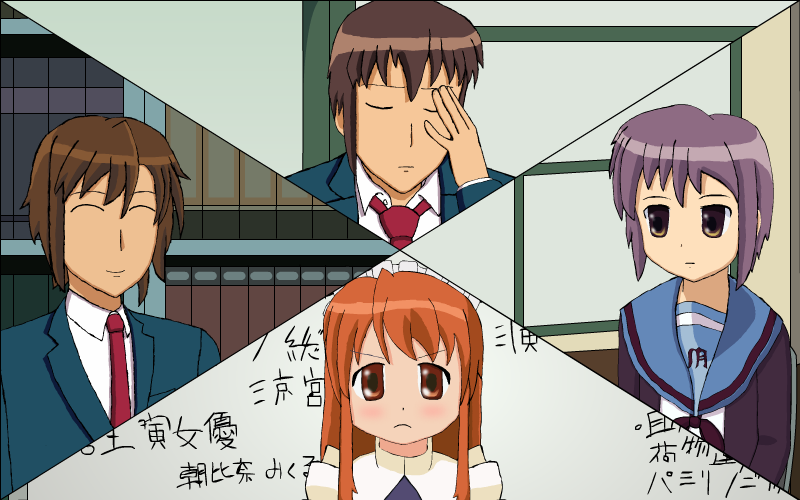 I thought I'd upload some more art from my DeviantArt account. Drawn in November 2010.

Yeah, finally, a decent Haruhi Suzumiya picture... which does not even contain the character the show is named after. xD;

I wanted to draw a picture with all the supernatural people Haruhi hangs out with not knowing of their special properties.
So, here it is.
And before you say Kyon is just a normal human, yes, I know, but after all, he was a slider in the Disappearance universe, and that still counts for me to put him in this picture! xD
Also, I wanted the picture to be divided into four parts, and including Haruhi was not what I intended (And I didn't want to have two aliens, either). ^^

This is the first time I worked with my graphical tablet and with the brush tool in Flash, and I guess it shows, especially on Koizumi. Even though he is the last character I drew, he is also the sloppiest of them all, since Flash kept glitching up my computer, so I wanted to finish this picture fast. ^^;
Actually, Yuki was the first character I drew, but because she looked too terrible, I redrew her again. She was the second one to be colored, though.
Something still bothers me about Yuki's eyes. But I can't quite seem to be able to fix it. *sigh*
Mikuru was the first one I colored, and, to be honest, I think I did the best coloring on her.
Kyon was the third character I drew, and, well, he could have turned out better. Especially his hand. And I actually WAS even using a reference on him and his pose. Oh well, it could look worse, I guess. At least he looks better than Koizumi. xD;
Though I have to say, even though Koizumi looks worst, I like his background the most. But probably only because it has books in it. xDD

Possible Scenario (written in like 30 seconds):
Haruhi: Listen, brigade members, for the following school festival, we are going to make the sequel of our first movie!
Kyon: (Please don't almost destroy this planet with your weird common sense again.)
Yuki: *looking up from her book* Yes.
Mikuru: I- I will try to do my best!
Koizumi: That is a splendid idea, Suzumiya-san.
Kyon: (At least try not to agree with her all the time, Koizumi!)

P.S.: The writings on the white board behind Mikuru are from the "Sigh of Haruhi Suzumiya" episodes, so they are the roles for all the characters of the "Adventures of Asahina Mikuru" movie.
I tried to copy every letter as good as possible, but sometimes I was not able to decipher it too well, so please don't mind probable mistakes. ^^;