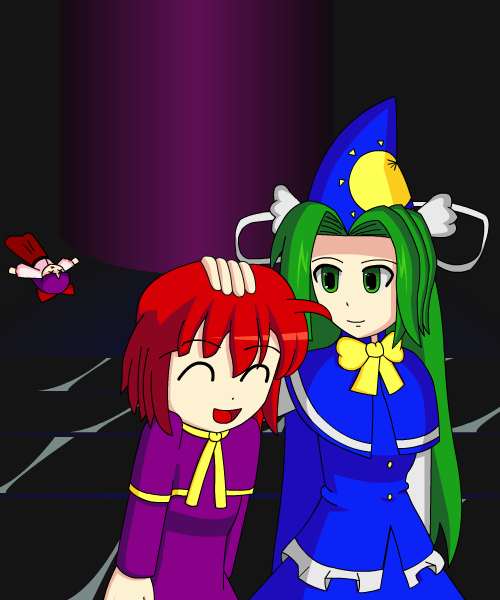 Who's a good girl

Reimu: I can sense some kind of tremendous evil here... Here she comes!!
___Mima ENTERS
Mima: It's been a while, Reimu.
Reimu: Mima!! You're the one who wrecked my shrine, aren't you!
Mima: Oh, who cares about some cheap shrine in the middle of nowhere? My goal is to exact revenge on the entire human race.
Reimu: Well, I suppose it's fine to dream big. However, there is no greater crime than insulting my shrine. I'm sealing you up, here and now!!
Mima: Hm-hm, a challenge!! ...But I'm afraid I just don't have the time. It's just a little longer until I am completely restored! So, until then... please play with this one. See ya!
___Mima EXITS
___Marisa ENTERS
Reimu: Hey, wait... damn it!
Marisa: Okay, just leave it to Marisa!
Reimu: Get out of my way!!
Marisa: You heard Lady Mima. She's too busy to deal with you now. Just wait here and play with me for a little while. Although, I doubt she'd mind if I just defeated you here...
Reimu: I won't lose to the likes of you!
Marisa: Kyahahahaha!
___...
Mima: You have defeated that shrine maiden?
Marisa: Yes, Lady Mima!
Mima: You are such a good girl! <3 Come, let's exact revenge on humanity!
Marisa: Hehe.

[Yes, I have shortened the dialogue. And I know those hearts Mima uses were only used from PoDD onwards. So what? xP]

Who's a good girl?
Marisa is, of course! ^^
Who did you expect? Alice? xP
[I wonder how many people will click this picture thinking Sanae will be on it because they haven't really seen the thumbnail...]

I had a few alternate titles, reaching from "Marisa is a good girl" to "Praise me more", but this is what I went with.

First time I've drawn Mima! And more pictures to come. Yeah, I'm a big Mima fan. And I'm a big fan of Yuuka, too. And of Shinki and Alice. And...

At first, I wanted to limit myself at the color capacity of the PC-98 for this picture, but when I found out that it has in fact a 16Bit capacity instead of an 8Bit one, like I originally thought, I dropped this idea, because nothing would have looked different from my usual drawing style anyway. xD;
But, seriously, 16Bit? Sonic the Hedgehog started with 16Bit, and it was a lot more colorful than Touhou 1 - 5! Heck, even Seihou is more 16Bitty than Touhou. Oh, well. At least now I know of this.

About the picture:
At first, I only wanted to draw a picture with Mima patting Marisa98, but some time when drawing this, I decided to throw in a defeated Reimu as well, to give this picture a bit more of a story.
Also, now this picture has changed from "Heartwarming" to "We're all doomed". And please don't ask me where Genjii is. He probably flew away or something. xD;

The background is representing parts of Marisa's and Mima's stages, the floor being from Marisa's, and that purple pillar thing from Mima's stage. I originally wanted to include those white/ blue pillar things (I always imagined them as spiral stairs for some reason), but they were just too bright and took away the attention from the actual focus.

I'm actually quite pleased with the outcome for one. The shading is not all too bad, you know what is supposed to be what (for the most part), and I'm getting slightly better at clothes. I still need to learn a lot about folds, though.

Marisa, Mima, Reimu, background and most of the dialogue Â© Amusement Makers/ ZUN
Picture Â© me