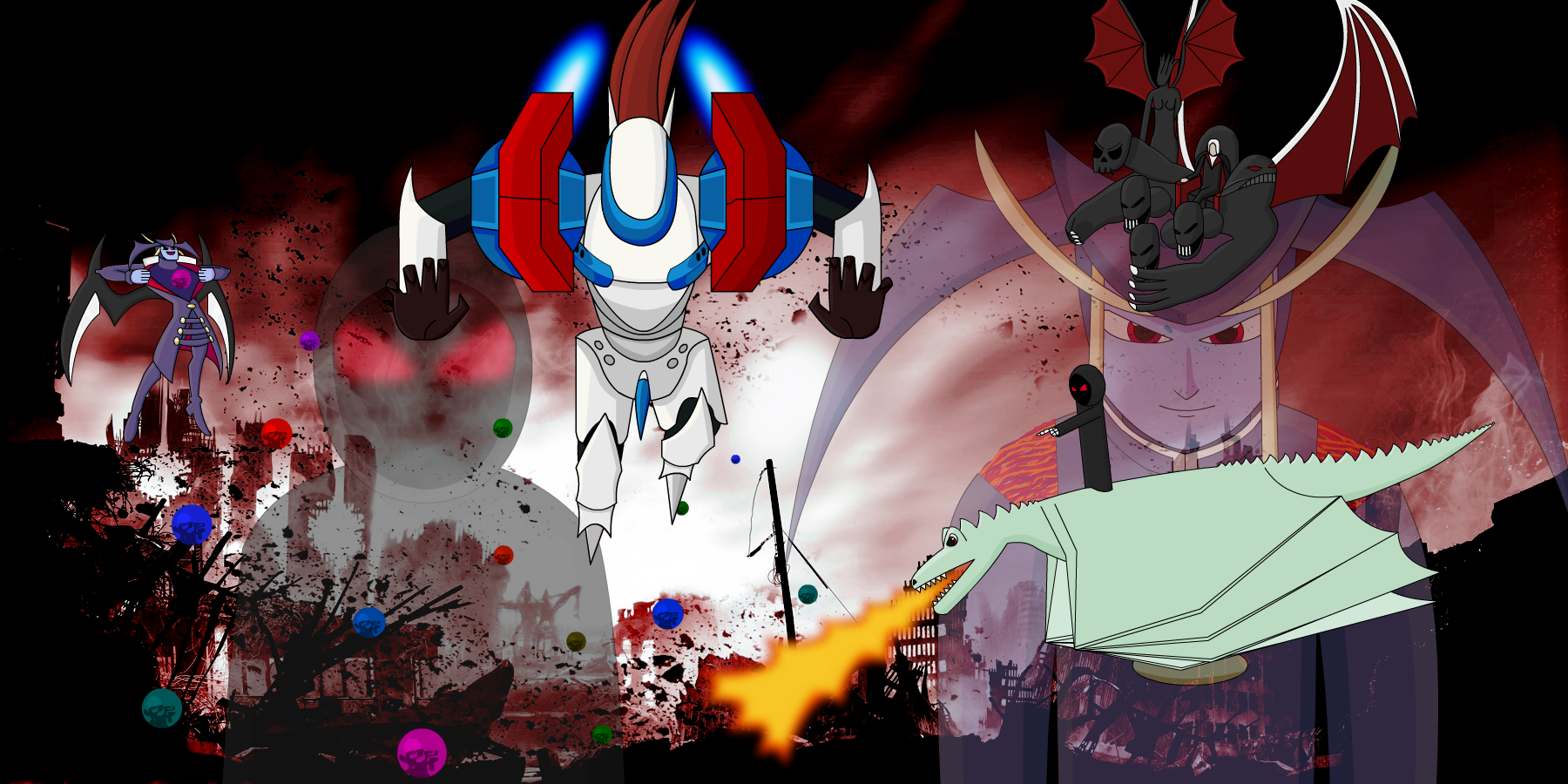 The wrath of the final fiends

First of all: The background is (obviously) not made by me, but one of the resources allowed to be used for the "Darksiders contest" pictures on dA.

Well, my version of the final judgement.
I didn't want to draw the four original horsemen, because I wanted to draw something at least a bit original, so I came up with the idea of using characters from video games. xD;

Justice (the Gear): She is replacing the horseman "War", as you can see because of the red jet packs.
Justice is from the fighting game series "Guilty Gear" and was the final boss in the first game. Back then, she was referred as a male (because of crappy translation, I guess).
Jedah (the Devil): He is replacing the horseman "famine". Why? Because he's the devil. He can be anything! He has gotten black scythe-wings as his identification as Famine.
Jedah is from the fighting game series "Darkstalkers" and appeared in the third game, called "Darkstalkers 3: Jedah's Damnation". He was, just like Justice, the final boss.
Count Dracula: He is replacing the horseman "Pestilence". His machine has gotten white instead of black wings.
Though he is not actually a video game character, he does appear in most of the CastleVania games as the final boss.
His appearance and his machine are the one from the game "CastleVania: Symphony of the Night".
Death: He is replacing no one.
Death is also not from a video game, but he is usually one of the last bosses in the CastleVania series. I gave him a pale-green dragon instead of a horse, because everyone already has something special to fly other than a horse.

Why did I choose exactly those four characters as the "horsemen"?
Well, for once, who is starting the Apocalypse? The Devil of course! And who does profit most of it besides him? The Grim Reaper, who can do with the souls the devil doesn't want whatever he wants.
So, I had two of the four horsemen. Because War and Pestilence both were still needed, both Jedah and Death called one of their friends to help them leading the Apocalypse. Death called Dracula, since they seem to be old friends, and since both Jedah and Justice are the final bosses in their games they probably know each other as well. xD

But though Death and Jedah are behind the plan of the Apocalypse, Justice is the one being needed to even start it. Why? Because War creates death, and a longer war creates famine, which also results in death. And the weaker humanity becomes, the easier they get sick, resulting in the appearance of pestilence (which also results in death).
So, everything is depending on a giant war, probably even bigger than both world wars combined. And Justice is just the right Gear for that.

About those flying orbs, those are the souls of the killed people ready to being aborbed by Jedah.

Justice Â© Arc System Works
Jedah Â© Capcom
Dracula (design) Â© Konami
the background is one of the resources allowed to be used for the "Darksiders contest" pictures. Probably Â© the creators of "Darksiders".