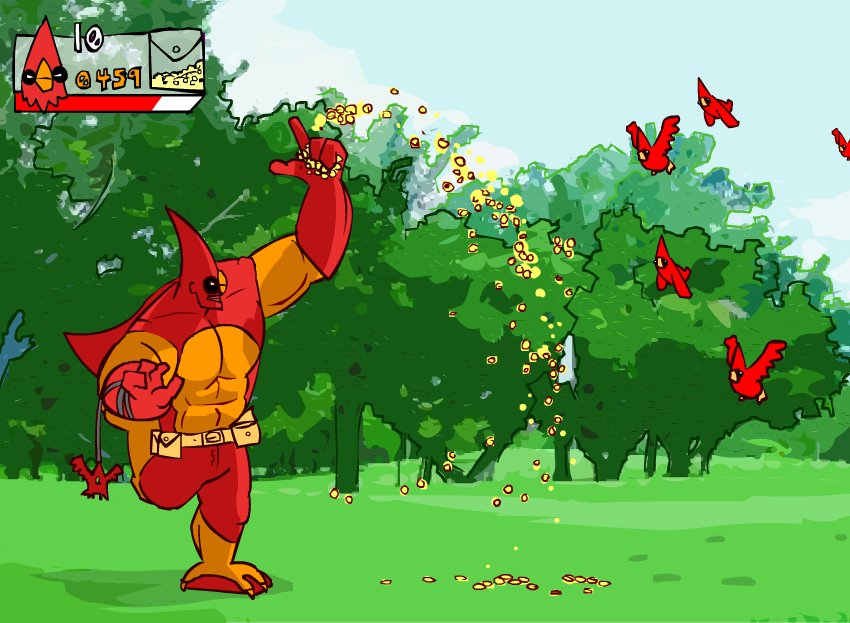 ah yes, the old cardinal man game. never made it out the door.

Well hmmm this one is okay I am just not sold on the idea of this and I can see how it never really made it to a game. I will say that it is full of good ideas and great art. You have created a good mascot or hero here and he is just like you would picture a "CARDINAL-MAN" with his own game. The birds or cardinals themselves are nice to see and overall drawn the same and similar way as the cardinal-man, which is good for a consistent flow of characters. You want to establish that those are his kind but not necessarily his people. The coloring is nice, I like how you don't stay within the lines you've drawn but let a bit of color slip out of the edges to give it a nice clean but messy look. It always works well for you when you do that type of coloring. The character status bar at the top left corner was great as well. You used his bird-seed weapon in there as a counter for how much seed is left by having it inside a bird-bag or pounch. That pounch was nice to see and works well for this, as you can see the bird seed being low as he uses it. I did like the bird-seed as well because it has a lot of detail and you're able to draw many seeds and not get lost in the piece of art and you can follow each seed in a way that doesn't look confusing or too messy. The way he is throwing it as well is what you would expect from someone who isn't a human but a bird-man. The way he is standing is also nice because it is something that birds do, but I am not sure that was your goal there. I do like the color combinations of the suit he wears to match that of a cardinal bird. I think that was accurate and also the mask really worked for the cardianl look. I think overall here you had a good idea but I can see why you didn't do anything past a concept. This would have been a fun game, but I don't see much more than feeding birds, and as fun as that is, it isn't something to really draw in an audience.

~~THINGS TO IMPROVE ON~~
Fine as it is but I can see why you did not move forward with this submission as a game, but as an art concept I'd love to see more of Cardinal Man.

not as good as your other art but still awesome!

I made it to level seven on Alien Hominid HD! I know that doesn't relate to anything but Dan Paladin awesomized it with his art so I'm just sayin'. Rad art, though!

Maybe you could try making a game on Newgrounds first?