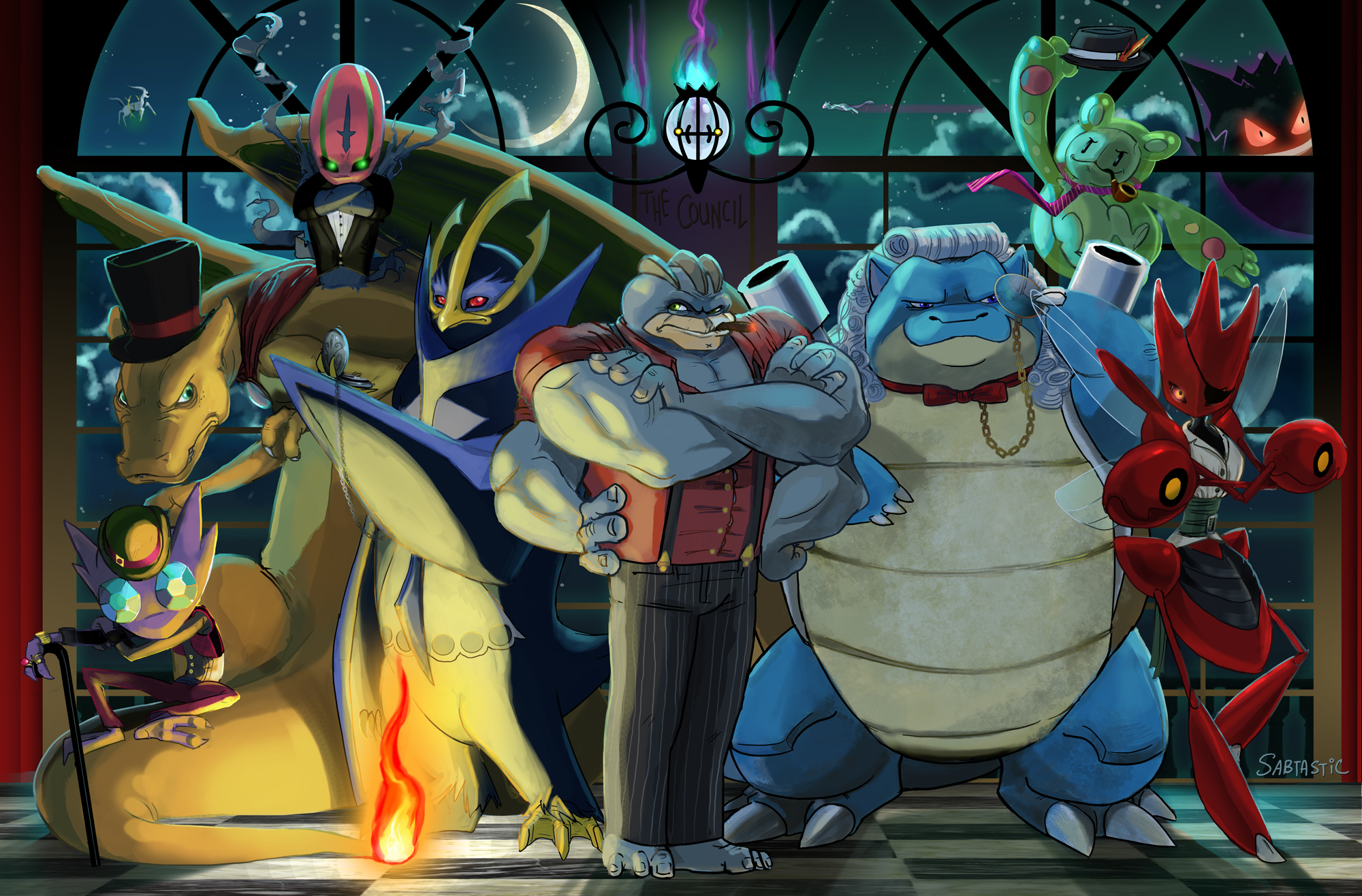 Fullview so you can see the tiny hidden Pokemon!

This commission was started back in late 2011. It's the biggest group picture I've ever done, so it was a much-needed kick in the pants, because I've been lazy with simple, single-character stuff lately. The commissioner has been amazingly patient with me. I told him it would take 2 or 3 months, and it ended up taking 6 or 7. I've lost track.

ANYWAY! Here are the names of the Pokemon featured:

Tell me what you think...!! At this point, I'm tired of looking at this thing, but I'm always looking for feedback, SO BE CRITICAL!

Classy as f*ck! This really made my day after I thought it was ruined when I saw both my cat and my dog throwing up respectively and then stepped in cat sh*t. Keep up the good work! ^^

Excellent... though for some reason... Why do I think Charizard is about to roast Empoleon's crouch with his tail? Also are they suppose to represent Gym Leaders of another realm? Just guessing here due to eight of them standing there in regal outfits. Plus Mewtwo is an instant win :)

Machamp is all "Like a boss!" and all the other Pokemon are all "Like a sir!" I really don't know how else to express how this makes me feel, other than that it's just so awesome. The atmosphere is so...um...high society mobster bossish...I guess. Makes me think of the Penguin from Batman if he were an awesome villain and had lots of badass friends. Having Mewtwo and Arceus in the background is interesting. It's like the first gen manmade figurative god of Pokemon is about to go up against the later gen natural literal god of Pokemon, which adds a very strange flavor to the whole high society mafia flavor going on in the foreground. I wish you'd done a bit more with Gengar, and Chandelure just looks like he's the chandelier for the council rather than actually part of it, probably because he's positioned as such and is completely unadorned unlike the rest of them. He has flames that can literally consume souls and leave a body behind, so you can afford to make him look as badass as you want to. As he is now, he's little more than a lamp compared to the awesomeness around him. That's about all the criticism I can offer on something I admire this much. I can't help but give the full score, this is probably the most awesome Pokemon picture I've seen in years. Also the first art review I've done in years, so sorry if it's not particularly helpful. Anyway, my thanks go to the brilliant mind that commissioned this and my praise to you for your awesome art skills in bringing it to life. It's rare I get so much enjoyment from but a single image.

I could totally imagine them being in some sort of gang where they smuggle illegal poffins or something.