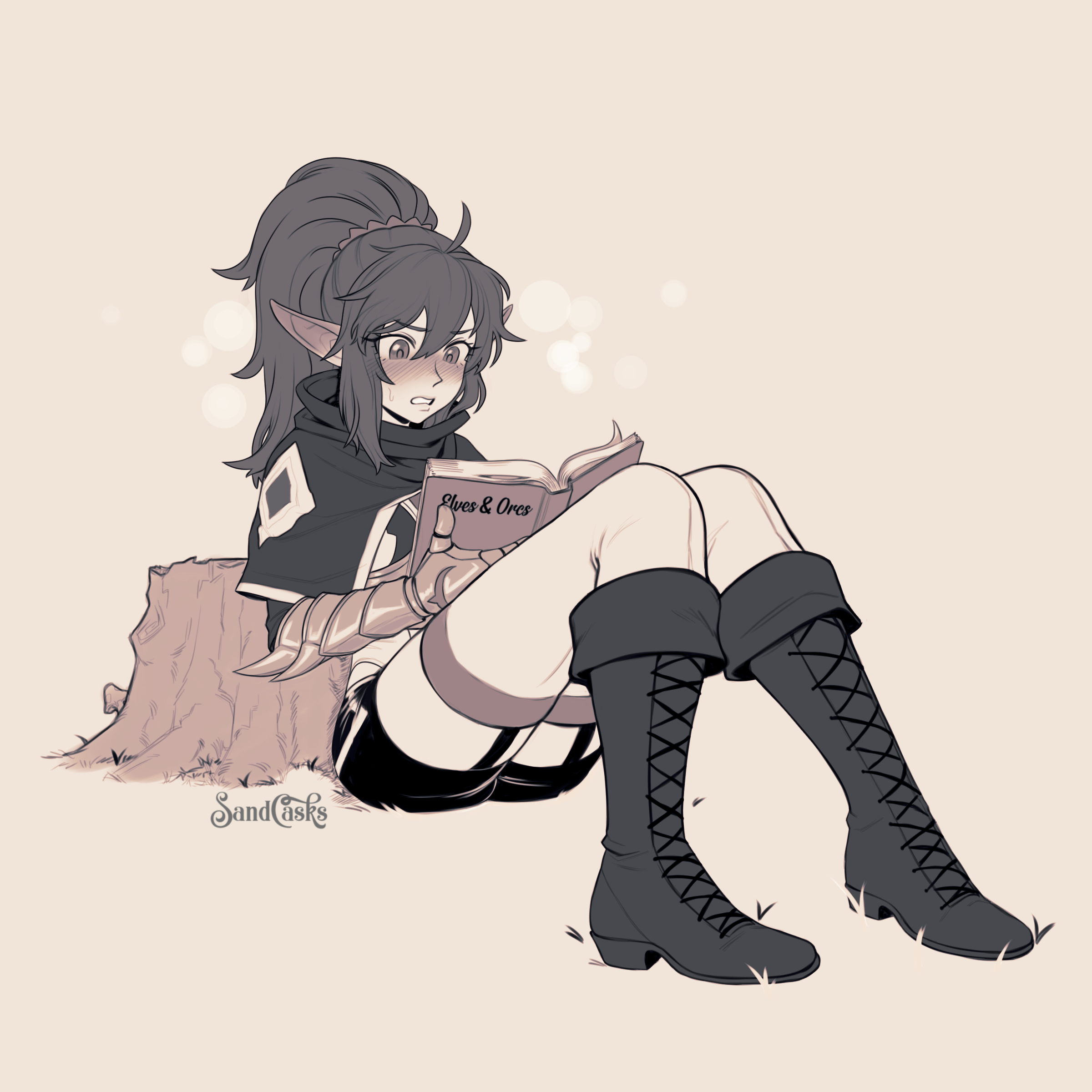 Context of the book: Reads as follows.

Over seven hundred years ago (according to the deity calendar, which could translate into a much greater period of time according to the mortal calendar), the twin elven brother deities representing the sun and the moon, Alveriun the bright, and Dossamir the shadow, came to defeat their mutual foe, Vaseroth the wicked. Vaseroth was a treacherous and hateful entity, left over from byproduct during the creation of our universe. While Alveriun and Dossamir don't always see eye to eye as twin deities, their conflicts are often those of brothers, not wars waged across the planes of creation. Several larger scale incidents, inflated by Vaseroth's interference drew the attention of the brothers when they noticed he was trying to pin them against one another; knowing if one of the brothers decided to kill the other, the surviving one would be temporarily weakened.

Alas, the brothers knew they didn't hate each other, as much as they vexed and fumed and didn't always get along. For Dossamir's wife, Tylanni, the maiden of the stars was often sought after by Alveriun. Indeed, one might speculate that Tylanni pledged herself to Dossamir to spite Alveriun, or at least get some protection from his pursuits of her hand. This was a long standing point of contention for the brothers, and perhaps the most vicious circumstance to ever overshadow their relationship. Vassaroth often tried to turn Alveriun to the dark, often claiming that Dossamir's darkness was the reason Tylanni ultimately chose him over the other.

Vasaroth's treachery revealed, after Alveriun confronted Dossamir, creating a distraction enough for the malevolent entity to gain access to Tylanni's chamber within the celestial star palace. For with Dossamir distracted by his brother, none were present to watch over the palace, let alone Tylanni. Only after the brothers had nearly exhausted each other did they realize how long the fight had actually been going on without Tylanni coming to stop them.

Realizing they fell for the duplicity of Vaseroth, Dossamir and Alveriun put their differences aside, and worked together to travel to the darkness beyond creation where Vaseroth dwelled in his personal lair; the castle of the umbral eye. From here, Vaseroth could look through anywhere in creation darkness existed, allowing him to see all manner of things, including the arrival of the brothers. "Kill them both! Do it quickly!" commanded Vaseroth, raising his axe of umbral shadow, the Grimrender, to give the signal for his army of black abominations to attack the elven deity brothers.

But the brothers would not deter, even though they were weakened by the extensive battle, and subsequent travel to the edge of creation. The brothers shared in each other's power as mighty gods, born of the same blood, and similar abilities bestowed upon them, one brother protecting the other whenever the other became too exhausted to continue fighting. Dossamir protecting Alveriun, and Alveriun protecting Dossamir. This displeased Vaseroth, who decided to step into the fray himself. Striding through the stars, brandishing the Grimrender, the dark lord gave no quarter to the brothers. Dossamir, with his last bit of power, summoned the ancient armor of night, known only as the Jae'delar to the elven tongue, to wrap itself around his brother and protect him from Grimrender.

(*Author's note: Jae'delar is a rough translation, letter by letter from old elven dialect. It is impossible to properly decipher, and translate the proper name of Dossamir's armor into another language. Even the elves themselves have no idea what Dossamir called his armor (and honestly, how would they ask him?). Some speculate that based on other texts, it somewhat was called something akin to a "living shadow", which in elvish would translate to "Guin'gwathren", very different from Jae'delar as scribed from the original books. Description of the armor according to the most ancient of elven texts speaks of shadows worn by Dossamir that could "become anything he needed", sometimes weapons, but usually some form of clothing or armor.)

Alveriun's life was saved from the Grimrender, thanks to his brother's quick summoning of the armor, but the power of Vaseroth was still enough to knock the elven god of the sun to his knees, given his dramatically weakened state. Dossamir stepped in to confront Vaseroth, but without his armor, there was little he could do aside from being knocked aside by Vaseroth. Alveriun awoke from his dazed state, seeing Dossamir being lifted off the ground, and choked by Vaseroth, then in a last quick moment of desperation drove his blade Iskyn'cai into the back of the dark lord, before the dark lord had realized that Alveriun had come to.

*(Authors note II: Iskyn'cai is a rough translation of the ancient elven texts. A proper name would be indecipherable to modern common. Similarly as per the note prior to this one, ancient texts describe Alveriun's blade as a solid burning light, that never stopped shining. Translating this to an elvish phrase today would read as "Oiale'galad" or The Everlight, which doesn't translate into a proper read of Iskyn'cai. We may never know the proper name of Alveriun's blade.)

As Vaseroth lay dying upon the ground, the brothers together banished him from the land of the gods, stripping away his divinity and casting him out to the land of mortals. His now mortally injured body, still impaled with the Iskyn'cai, crashed somewhere deep in the frozen wastes, where he would breathe his final breath alone.

Dossamir reunited with his wife, Tylanni, and vowed to watch over the castle of the umbral eye, that the inherent power of the sacred location never be discovered again. Blanketing the "path to the castle" with his shadows, Dossamir has since made the umbral lair his personal domain, where none can discover, and none may bother he or Tylanni.

Alveriun returned to the celestial palace, with help from Tylanni, who came to understand that Alveriun was not pursuing her for selfish gain. She remained by his side as a friend, nursing him back to health with help from her sisters; Syaila, lady of the morning sky, and Kylvair maiden of dawn. It was during this time, Syaila came to genuinely appreciate Alveriun's boisterous and hardy personality, giving Tylanni reassurance that she'd stay by Alveriun's side, that he would never be alone again. Soon after, Tylanni returned to her husband's side, joining Dossamir in his vigil of the umbra.

And what came of Vaseroth, the fallen, and defeated? This is where the story of the orcs begins, for Vaseroth's hate of the elven brothers would not die so easily. Created from corporeal remains of Dark Lord Vaseroth, the last tiny shred of his divinity sent his undying will sinking into the mud of the land, excrement of the beasts and spoilage of the frozen wastes. From this curse came the first orcs, animals and beasts, monsters and aberrations twisted over time of being exposed to the remains of the fallen dark lord, until they had warped and twisted so much that they could no longer be called natural.

These were the first orcs, who took Grimrender for themselves off of Vaseroth's bones, and carried off Iskyn'cai after removing it from his body [difficult translation, tossing it into the deepest blue]. Monsterous orcs, horrid beast-folk that crudely resemble the minions of Vaseroth that did battle with Alveriun, and Dossamir, when they stormed the umbra-eye castle. Orcs, filled with hatred of the children of the brothers; the elves born of Alveriun and Syaila, and dark elves born of Dossamir and Tylanni.

Alas dear reader, we can surmise the orcs are not without some merit. While we know Grimrender exists, as it is still today passed down from chief to chief of the orcs, and whoever holds it is the clan-master in their culture. This also goes to speculate that somewhere in our world, the Iskyn'cai still exists as well; an "ever glowing light" as it is described, that they threw it into "the deepest blue", might refer to the ocean. In which case, the fact they did so means that water temperatures around the world have shifted over the many years the blade has been submerged, allowing tropical flora, and other formerly frozen regions of our world to now become habitable. These places which now are populated by the elven people, ever watching and protecting our lands on the behest of the brothers.

This is the story of Elves and Orcs.

What kind of information ?