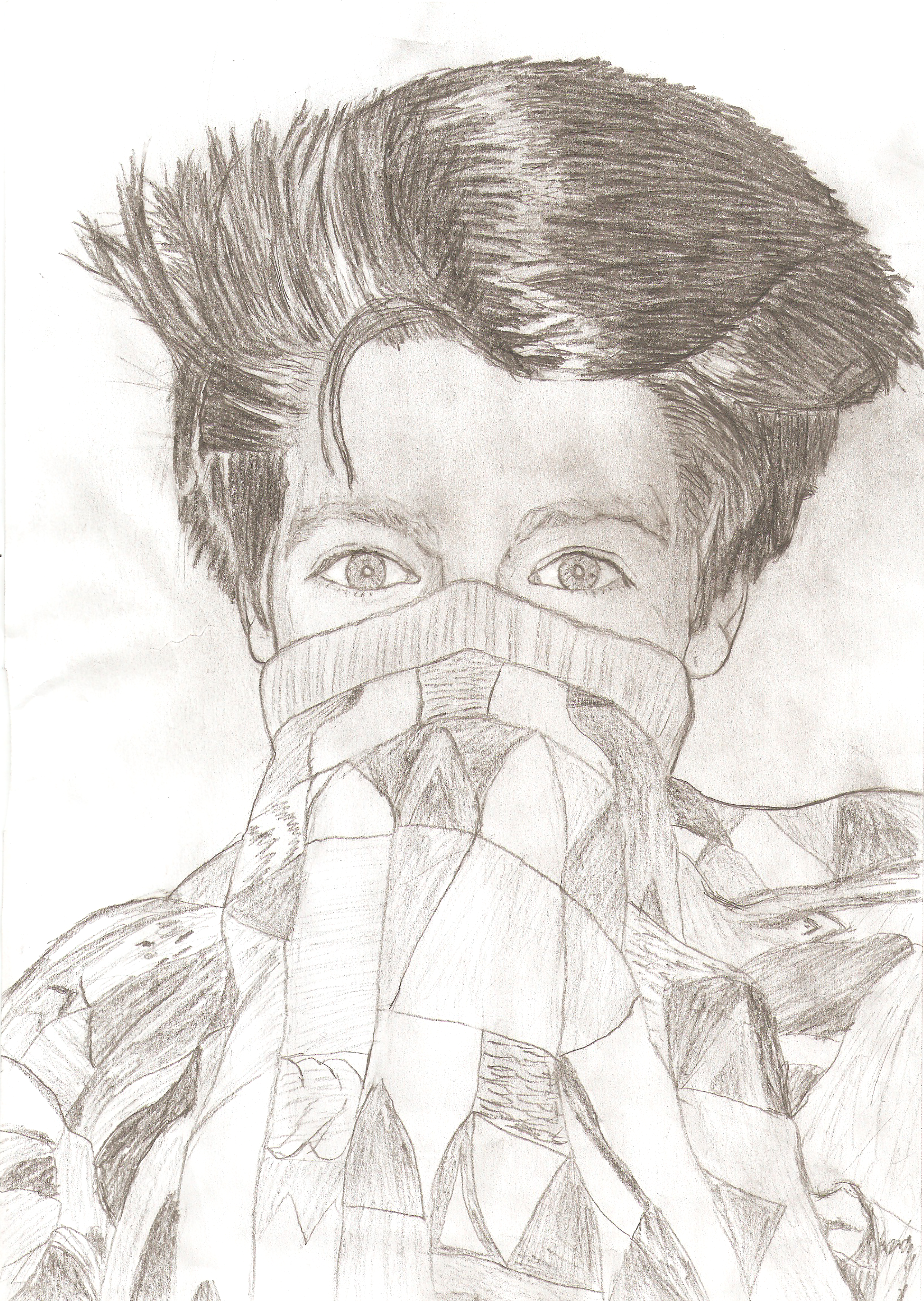 So I somewhat spontaneously drew something today, while catching up on some podcast episodes I had missed. Or well, I had planned to draw more in 2016 anyway, as I drew so little in 2015 (and every year before that, now that I think about it; I don't draw a lot). And as I found a rather perfect image to start with, I decided that I might as well see how well I can "copy" a picture, with nothing but a pencil and an eraser. I'm pretty bad at conjuring things straight from my imagination, so for now, I think I'll try to stick to drawing things I can see. I'm hoping to upload something every now and then.

Also, I have now scientifically proven that apparently you can get better at drawing, by pretty much refraining from drawing much anything at all for half a year. I mean, seriously. Look at this drawing, and the other art I have here on NG (apart from that fractal generated one)? I wonder what happened in between. I must've had some practice in my dreams or something, without remembering :p
I wonder if this means I will be a top class painter if I don't draw for 50 years?

I'm hoping that I can get accepted into the art portal in 2016? Maybe if I continue drawing things like this, I will :3

Oh, and that sweater is obviously just lazily and poorly drawn in to fill the paper; I'm not going for photorealism or anything!

P.S. As for the title, it's a bit of a bad pun, as "jordling" can techincally mean "earthling", in Swedish (although "jordbo" is more used), and it's a reference to the instagram account where I found the original image.

Impressive sense of realism with the face! I'm wondering if it'd have been different if the entire face was there, with some of it going out of proportion somehow, but the way the lines of the scarf fold look just right too... eyes look alive, shading's summery; the hair's wild but seems OK! Gets a bit more basic with the texture on the scarf itself, where thick lines contrast with the otherwise fuzzy (wool?) texture. As for the title, it feels like I rarely hear either one of those used, not jordbo either so much as stadsbo or similar... unfortunately a bit more common: jordgetingbo. Anyway this was a good piece! Good detail.

Hey, thanks for reviewing this! I agree with all that you said! I used a real image as my model when drawing this; only way I could manage. I'm by no means an artist at all, so the only way I reached even this level with all its flaws, was by spending more than 6 hours on it, I think? I didn't even really take too much of an artistic approach, except for the hair which I made less realistic. The scarf (that I think is actually a wool [indeed] sweater) is less detailed indeed. I wanted to practice drawing a realistic face :3
So basically, just laziness on my account!

Yeah, I haven't really heard it either. Jordbo, sometimes. And indeed, jordgetingbo way too often, hahaha :'D
Thank you!!!

I like it, u can improve i guess, but nice job!

Thank you! I can definitely improve a lot, and I hope I will :)

The darker lines in the hair don't make sense to me. It looks like they were mistakes.The hair looks very flat, especially because of that long dark line and the lack of tonal contrast. When I draw hair, I prefer to color the entirety and then use my kneaded eraser to add highlights. I think the nose outline is too dark; you could have made the outline darker and added slight shading to one side. The right ear seems rushed. It looks like the person is putting a sleeve over his face, but the outline for the sleeve is darker on the left side than the right, which is confusing. I think there should be some more shading under the eyes. I like the fact that you left your hand smudges on the face, but I think you should have erased it elsewhere. These are just random thoughts I had while staring at the drawing, but I do like it.

Hey, and thanks for the review!

If you're talking about the blacker lines right in the middle, you are right if you look at them from close up. I personally think it looks way better if you look at it from a bit further away. I didn't intend for this to be photorealistic anyway, so especially with the hair, I just did whatever I wanted to (not all of the hair was included in the drawing I used for reference).

Also, as I barely ever draw, I tried to keep as many elements as close to the original picture as possible, instead of experimenting. The lack of shading is mostly because the picture was very well lit (I put the picture in a paint program and turned it black and white, so it was pretty easy to see what was dark and what was not). Usually, for drawing, I get that contrasts are more effective. I might try to experiment more with shading in the future!

The outline of the nose probably is a bit too strong, yeah, even if it was pretty noticable in the original picture too.

As for the lack of symmetry when it comes to the thickness of certain lines, you're totally right. I just didn't think about it much at the time. For some reason, the bottom of the face has different thickness on both sides too. I wouldn't say it's the ear that's rushed though, but more everything that's around it.

As for shading under the eyes, there wasn't really much more in the real image, but there is the slightest hint of a line a bit more below, which I should've included but missed. I think that would've helped with what currently looks a bit odd; I see it too.

I would've erased the smudges elsewhere, but I have the worst erasor ever, so I wanted to use it as conservatively as possible xD
Using it would've just left a lot of weird super-white stuff around the face, with different kinds of black smudgings here and there, unfortunately.

Your random thoughts are pretty helpful!
Thanks for the tips :)

Great drawing! Jordi sure is a sexy beast, isn't he? huehehuehueheu

Ahaha xD
One of my goals for 2016 sure was reached faster than expected :p
Thank you for having my back; it's an honor to be scouted by you!

Also, duh. The sexiest beast on the planet ;)