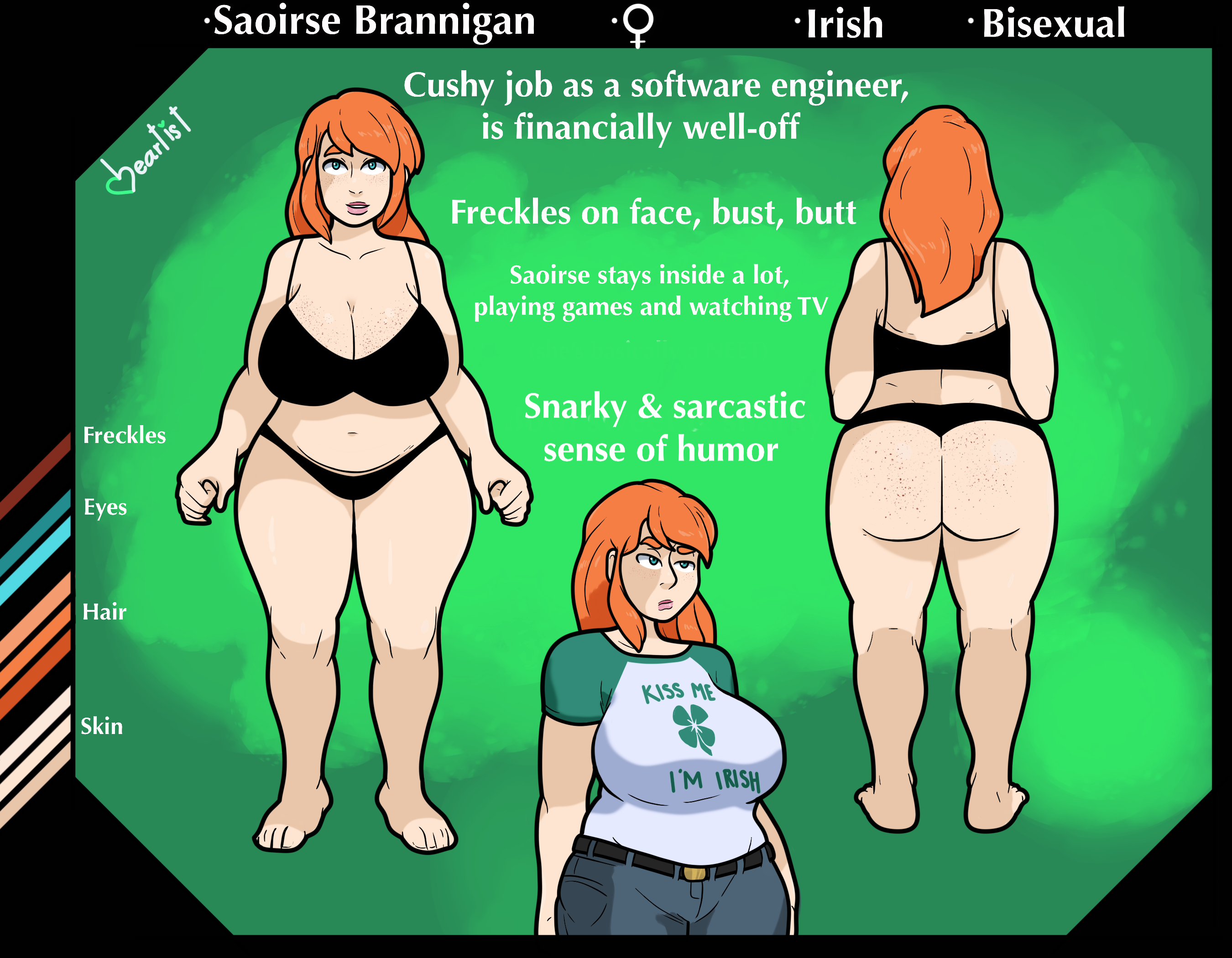 A character sheet of an OC that is actually an old one that I’m bringing back!

I first made Saoirse all the way back in high school, I drew her and her will-they-won’t-they boyfriend Lucas all the time. I loved drawing them doing cutesy things together, I loved going into school in the morning and showing all my friends my latest works in my sketchbook. Over time, both me and my friends grew quite attached. The story she and Lucas were the stars of was vague and kind of formless, shifting between genres and tones constantly. Key elements would stay the same, but to me, the story I wanted to tell was a little less important than the two of them.

A year or two after I graduated, I revisited my old sketchbooks and folders and had a really fun time seeing them again. It was like meeting up with old friends again. But as I did, I came to a sad realization.

I didn’t know who they were.

I mean this in the sense that I hadn’t given either of them any character, let alone depth or nuance. I had drawn the two of them over and over, doing so many things together, but none of it told you who they were or why they were the way they were.

It was a simultaneously heartbreaking and motivating realization. To realize that I’d come far enough as a creator that I could recognize when my old work didn’t hold up and needed improvement. My new OCs, like Zack and June and Lulu, they have character. I can tell people who they are, they have character; depth and nuance, who they are and why that is.

For a long time I’d hesitated to bring her and Lucas back. I wasn’t sure what to do if or when I did, what direction to take them, how to make them fully realized characters. I started work on Saoirse’s new sheet, and consulted my friends on how to give her… something in terms of personality.

Huge shoutouts and thanks must be given to @Fozuna and @citalopram-overdose. They were insanely helpful in the process, especially Foz. I see you, you fucker. Take the fucking compliment. Take it. TAKE IT.

He helped me realize that I needed to dive deeper into her in order to fully realize her, not try to radically change what was there.

After all this time, I feel like I’m closing an arc of my life, and starting a new one. Closing a loop and opening a new one, artistically. I’m very excited to bring this character, and more, to life.

Be sure to leave feedback, I’d love to know what you all think!

I'm super excited to see Saoirse again. Even if she and Lucas didn't have much of a story to them, they are adorable all the same.

I’m glad you are! You were there even before the beginning, man, you’ve got the biggest veteran’s discount of all time when it comes to Lucas and Saoirse.

She looks so adorable and huggable! I'm a sucker for redhead with freckles :3 I really hope to see more of her, she seems fun too!

I’m glad to hear that, you’ll definitely be seeing more of her! Thank you for your kind words!

Eat shit. Make her the thrill-seeking mastermind that we all want to see.

Eat shit and live, Foz. It’s partially thanks to you that she’s back. Thrill-seeking mastermind and shitposter it is.

TYSM! Good question, give her a couple of bottles of Guinness and it’s over.