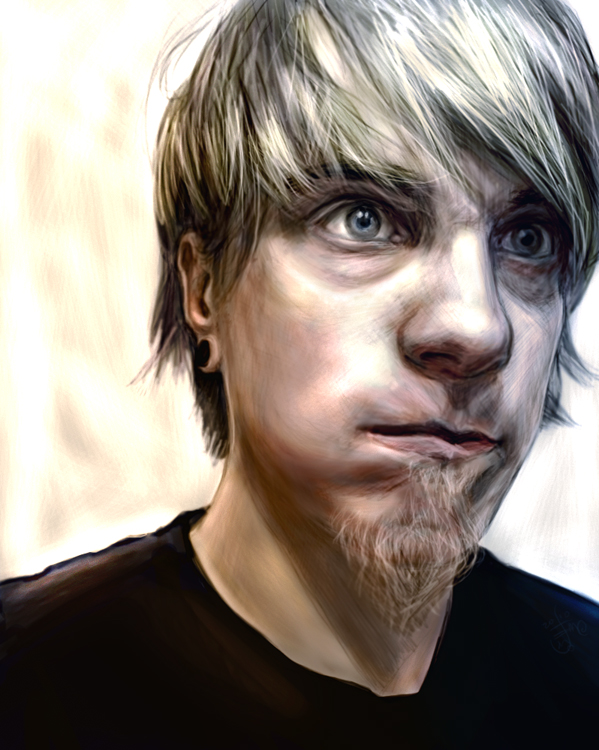 Captain-Ben - portrait Created in PS CS2, using reference photograph. He made this slightly more challenging by pulling a tongue-in-cheek face! Thanks dude!! ^_^_^

This is actually very well done. I wouldn't go as far to say that this looked like an actual photograph, like some of the other reviewers have stated before. This just looks like a very well done piece of art. The only flaw that I see (unless he actually HAS this weird feature; if that's the case, I apologize) is something just below his ear. I mean, it doesn't have a different enough of a color pallet to define itself as a piece of offset hair. Nor does it have any natural way of just being there. It looks like something took a clean bite out of him, leaving a bone sticking out to produce a sharp piece of flesh of some sorts (weird way to describe, yes, but it's the only way that I could think of).

Job well done, I must say.

Thank you for your review :3 Yeah, that's actually a pretty good point, I didn't even see it that way. Ben has gauges in his ears (I'm sure they are much larger by now). I should have added some curve of light around the edge to highlight it as being a 3d object but at the time I guess it never occurred to me! Thanks again!

thats some grazy stuff you made there :D
It looks so real! I really like the thing that you did with the eye's :D
a perfect profile picture for ng.