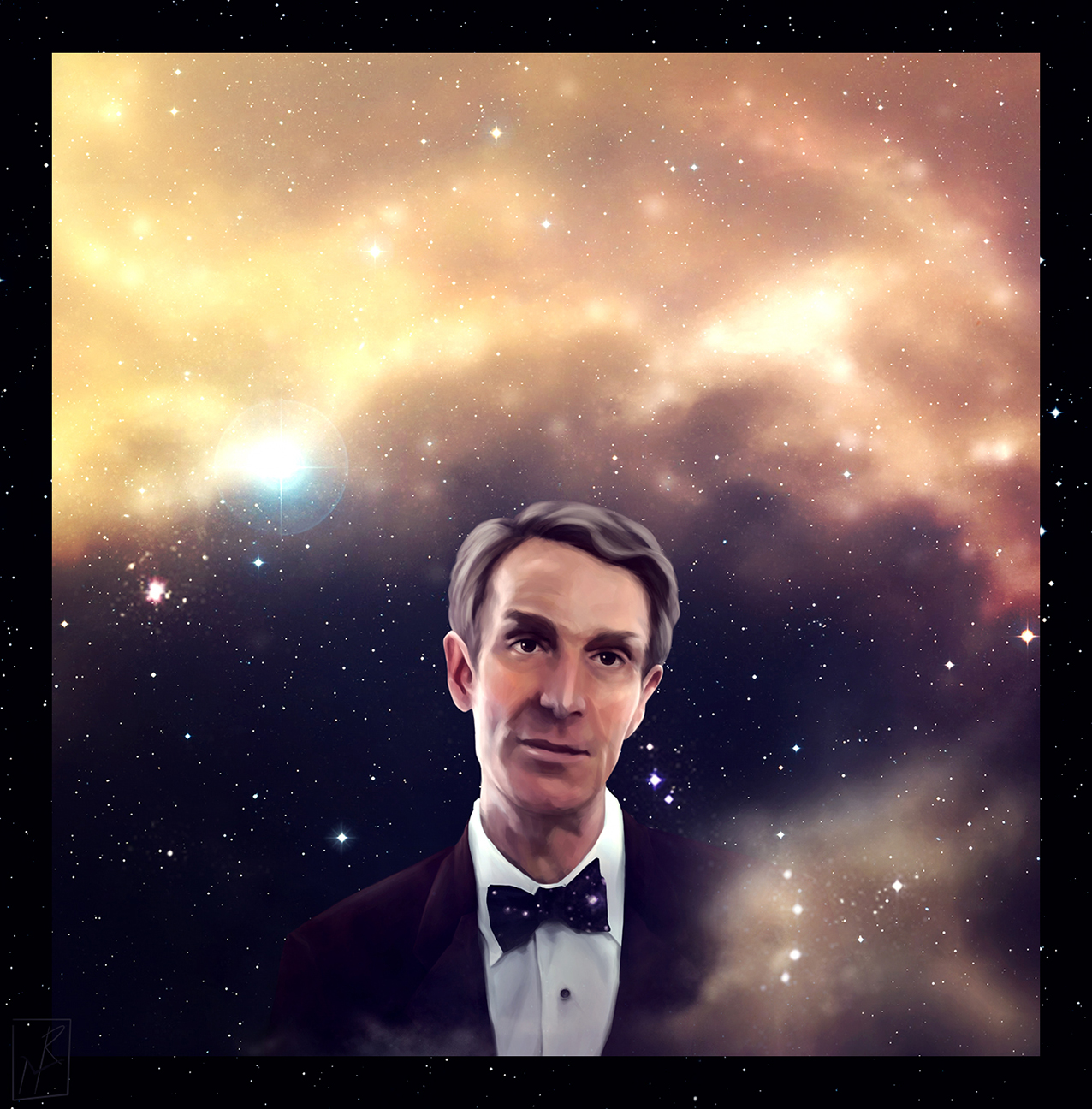 The Most Noble Thing

Hello fellow earthling
And thank you very much for having a look at my entry for Jazzas Challenge of the Month November with the Theme “Portrait of a Man”.

I chose to depict Bill Nye the Science Guy as representation of a wonderful, brilliant and influential man because of many reasons but mainly because he characterises the value of learning. Of course there are numerous others like him, who devote their lives to teaching the magnificent fascination and rational methods of science and I’d draw them all if I found the time.

I’ve always been convinced that curiosity is one of the most outstanding qualities of human nature. It is at the root of all grand things we’ve accomplished but we need people like Bill Nye to guide us in the right direction, so we don’t succumb to superstition and dangerous behaviour.
Bill Nye and his fellow scientists allow all of us, not only those who understand the raw data, a glimpse into the fascinating and vast wonders of our universe – from the Atoms in a Tardigrade to the Event Horizon and beyond. They share not only their knowledge but their joy and love for what is reality. They unweave the rainbow, help us understand it and make it all the more beautiful.
I do think it takes a strong, patient and kind person to do this, because of the never ending arguments with people who cannot comprehend, that understanding is in no way devaluation but profit to the wonderful things around us. It takes a lot of energy to fight against windmills and a kind and patient person to keep doing it with respect and compassion. To keep going and doing what they do is a testament that our brains have evolved to be curious, to seek out answers and to share it with others.
I am deeply grateful for all those people who let us experience the natural world with insight, questions and curiosity, who help us learn and inspire us to seek out answers.

For me, a real man isn't a warrior with a sword, it is a teacher with patience.
So yes, this is the portrait of a man who shares his love and interest for the world we live in, the planet we call home and the creatures we share it with. Someone who lets us look around us with a smile and a fascination so deep that it cannot be described.

Alright nerdizzles, enough with my orotund babble about how much I love people who share their knowledge. There are some references and stock I want to mention – Credit where credit is due, right.
I used some brushed from Sycra’s CS6 Brush Presets Collection (mainly the Angled Sketching Brush and some cloud brushes).
I’ve also used a Starfield photo taken by the Hubble Telescope, because I was too lazy to dot millions of stars and galaxies.
While doing the first sketch of Bill Nye, I’ve had several photographs of him around, most of them from a TED-Talk he gave recently.
There also is a very faint texture overlay (I doubt it’s noticeable in this resolution) taken from another Sycra Collection, sadly I can’t remember which one.

Congratulations, you made it to the end of my ramblings, now go get yourself a cookie.
Good luck to all contestants, best wishes and have an awesometacular day in the Milky Way!
Rahel

Edit:
After pinching myself and rubbing my eyes in disbelief, I can tell you that lovely Bill Nye here won the Challenge of the Month. That's so fucking cool that there is a grin stuck to my face :D
Congratulations to everyone else who participated in the Challenge, I really loved working alongside you and am looking forward to see more of your stuff. If you haven't seen the other entries, please check them out with the tag COTMMAN.

Alright, before I go and continue my silly happy-dance, some of you asked me what equipment I use. It's simple, just Photoshop CS6 and a very old, almost senile Bamboo Tablet.

Now, with all the best wishes and a huge smile: Have a good one everybody and enjoy your day!
Rahel

Have you seen the video of him reading hate comments? So great XD

And nice job on this!

In my mind the people who should get the most respect and admiration are the deep thinkers. Those who ponder the world and look beyond to see what the future could hold for humanity. Bill Nye is one of these men. BugsAndBooks you are a true artist and this work was masterfully done.

Keep doing what you do - xopenpathx

Hello you flattering flatterer
thank you very much for all the flattery and the fluttering stars.

I completely agree with your point about respecting those who ponder and wonder. For me personally there is one fact that makes them most deserving to be respected and supported: They willingly admit if they were wrong and actively test their own opinions, tear them apart to see if they can hold up.
Never trust a person who claims to hold all answers or who claims to never err. There is so much we don't yet understand and I truly am happy for and about everyone who takes on the challenge to discover more and more everyday.

Also, back to the fluttering flattery... I'm tempted to disprove your theory about me being an artist and maybe I should, keeping the scientific method in mind. But you know what, I'm just gonna silently disagree and use your kind words as motivation to one day live up to them. So, thank you!

'ello there Lord Panda
and thank you very much for the cute and cuddly words and all the five-corner-things.

Best wishes to you and have a pantastic day
Rahel

The artwork presented, I believe, is of utter brilliance for as the facial and anatomical proportions are greatly represented, and your usage of gradient shading and vibrant colorations is quite notable as well. The transparency of the bow tie is quite an interesting inclusion. May thine art succeed and concur the contest.

Oh my, hello sir,
thank you kindly for your genial words and the utter wonderfulness of those celestial bodies you have so graciously given me.

Right, aside from not accepting that not being a native English speaker makes me a lousy prose writer, I honestly thank you for the lovely feedback.
I'm very happy I've been able to portray this wonderful fellow human in a way others like it :)

Anyone could cut out an image of Bill Nye in front of a hubble photo. But effort went into this. You seamlessly have the mist pass in front of him as well, plus it's not a cutout of a photo but it seems to be a painting of his likeness. Also I like the bluescreen effect where the stars appear through his bowtie. I think that's just perfect. Also I'm glad you didn't use Michiu Kaku or Neil Degrasse Tyson or Carl Sagan. Hawking would be ok though.

Well indeed, you'd better win that frigging contest. If you don't, that only proves that it was flagrantly rigged.

Hello there Dr. Impossible
and thank you kindly for your Review and the starry things.

I'm happy you liked my choice of subject for this portrait, although I would consider Michiu, Neil and Carl to be equally as worthy to be standing in front of a galaxy. The value of sharing ones joy and love for learning isn't tied to personal likes or dislikes but is a wonderful thing no matter where it comes from.

Also yes, this picture is painted and the only photobashing that took place is an overlay of a deep space starfield photo taken by the Hubble Telescope. Please have a look at the end of my description for detailed information about the resources I've used for this piece.

Finally, I'm very happy to report that our lovely Bill Nye here won the contest. However, there have been many extremely well made and heartfelt submissions to this contest, which would have been well worthy to finish first. Although I am very happy to have won, I would never speak about a rigged contest if it played out any other way.