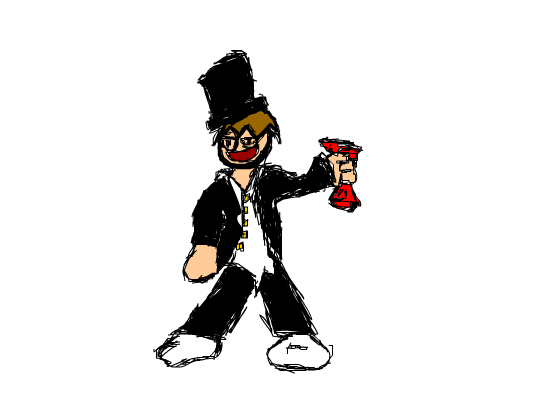 Just a drawing I made in a short time that My friends thought was funny, so here it is.

A gorgeous reproduction of a detriment to society.

No less than ten stars for you, my friend. Simply looking at this art says everything we need to know about drunkards. They wear top hats.

I was once attacked by a man in a top hat, so I assumed he was just another man that wanted to punch me. I'm just that kind of person; people tend to slap me for little or no reason. He stumbled up to me and hit me in the head with a bottle already bloodied by an apparent night of hitting people with bottles. It was when the spray of dried and fresh blood, spit and stale booze hit my face like so many baseball bats that I realized- this man was absolutely wasted.

He continued to hit me as I realized what this meant. This man was drunk, and he had very little control over his actions. As he stabbed my neck over and over with the shattered bottle, I thought to myself about the curious predicament thrust upon me by the availability of booze.

"Hmm," I said to mostly myself, "I continue to be assaulted and lose precious, precious blood, but it would seem that this top hat toting assailant should be hitting me simply because I'm a jerk, not because he's hopelessly inebriated."

I concluded that alcohol is hurting society. It hurts society so much; society feels like it was just forced to watch a Matthew McConaughey movie.

Your art very obviously shows a drunk man and his top hat. A bloody can is squeezed by his intoxicated grip. He's smiling. Why? Because... he doesn't know. He's drunk.

The world thanks you for this.