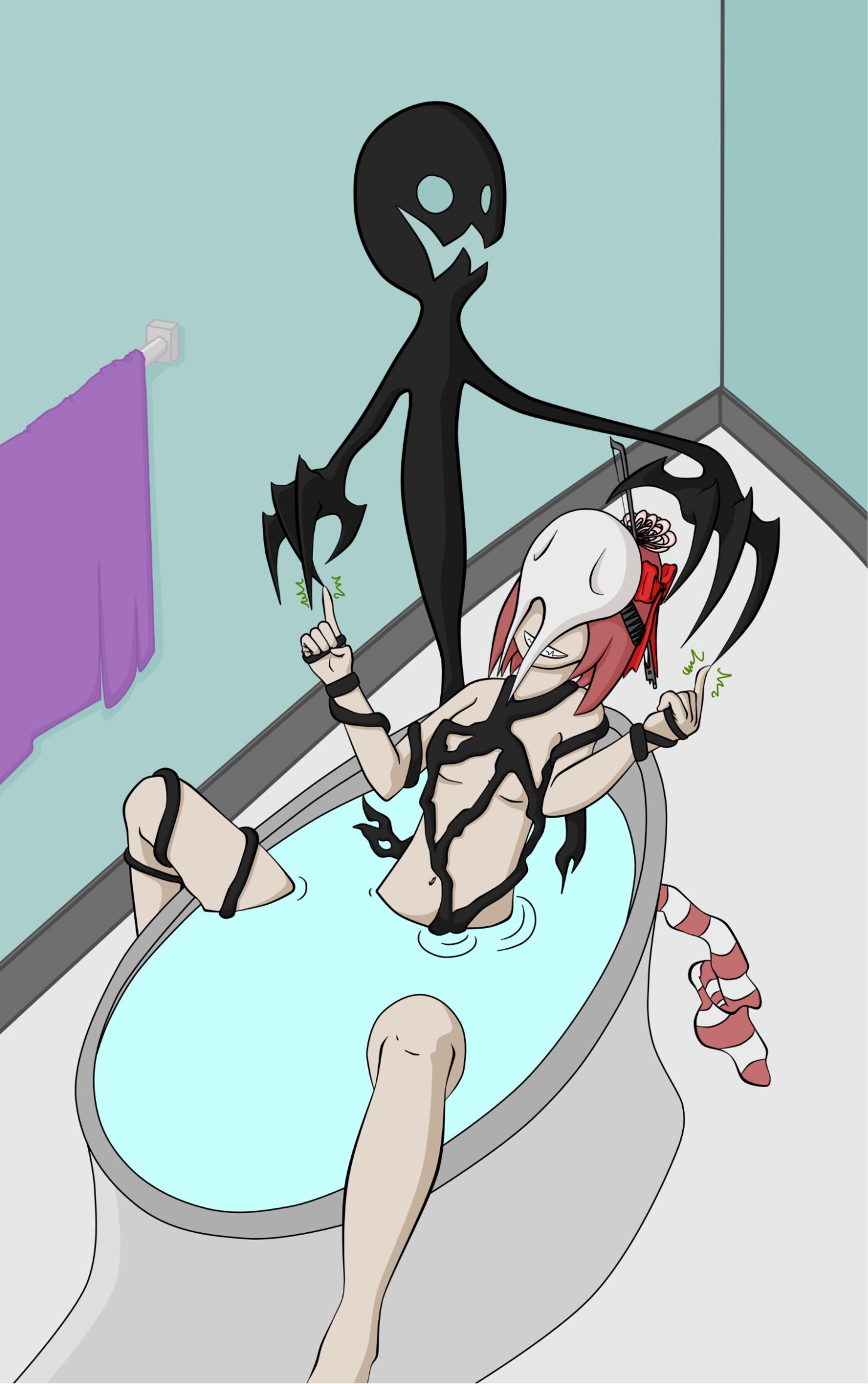 Drawn for the "I'll draw your character - my style" thread in the Newgrounds Art Forum for a character by heavyrain.
The actual drawn resolution was 2008x3200, but the art portal didn't like that and so I sized it down a little. I hope that doesn't trash the lines too much...

Wow A Customer After All This Time...

Alrighty then. Lets get the ball rolling.
Looking over this, I seem to be finding more and more upsetting features as I go on. But all that means is I have a lot you need to work on. And if Progress is your true goal, then you should enjoy this.

The lighting and the levels of shadows are a major issue in this. Most places you only have the base color and then some basically darker areas for shadows. You lack any sort of highlights. Because of this the piece has a very, VERY flat feel to it. Adding that 3rd level of lighting with highlights would add much to the piece. You also have some issues of a lack of shadows being cast. Under the back of the girl and the tub, if she is rased off the tub slightly then there should be a large area of shadow, even if she was against it, there would still be an area of shadow. And since I am mentioning shadows, I really think that the black creature could benefit from some really strong highlights. Give it a very slimy feel like ink, or oil. With Out a highlight of some sort, it reminds me of rubber from a tire or something
On the note of lighting I will mention color. Your colors are very flat as well. You have no variance to the skin. Usually on people, areas like the cheeks, knees, knuckles, etc. there are more reddish areas. with out this minor drift in skin tone it, again, makes it very flat.
I can tell this seems to be a cell shaded style of coloring, but sometimes, the extra steps need to be taken so it keeps from looking so bland.

The perspective is pretty skewed as well. The tub, the girl and the walls don't see, to match. one of the problems it the many of the lines on the wall are curved, but that doesn't match the style of the rest of the picture, giving off an inconsistency that just seems to bug people.

The water in the tub could have used some more work as well. I think it could use some more ripples and some reflection. At the moment it seems like this matte color that has no reflective properties.

Now, time for anatomy. I was going to let this one slide, but after looking at the hips for a bit, I knew that I needed to mention it. At first everything on the lower end seems fine, but it just isn't so. The way it sets, the legs just don't connect with the hips. For them to do so, this poor lass would need a crotch a half a mile long.
The arms are another story. The upper arm on her left arm seems like it would be too short, You need to work on some foreshortening.
Watch out for her stiff back as well. At the moment, it sheems she is deliberately forcing her back to be straight, hence why I mentioned the shadow earlier. In a much more relaxed state she would be going with the curvature of the tub.
Speaking of... What the hell is up with that tub?! It looks like it's the bottom part of a phone or something...

Line Weight. In some areas you seemed to land this well, in others, not so much. Areas on the human looks good and seem to be doing well. same with the creature. But the rest of the picture seems to lack. I know that Hard surfaces usually don't have much in the way of line weight, but things in your Foreground should have the thickest and then thinnest in the background. You seem to have this reversed here. The lines on your paneling are huge compared to anything else in the scene, yet your tub has some of the thinnest. Keep in mind that big heavy things tend to have the thickest lines.

At an over all stand point, the color of the piece seem very washed out. Try playing with the saturation levels a bit.

I look forward to seeing your progress.

its a beautifull idea keep it up.