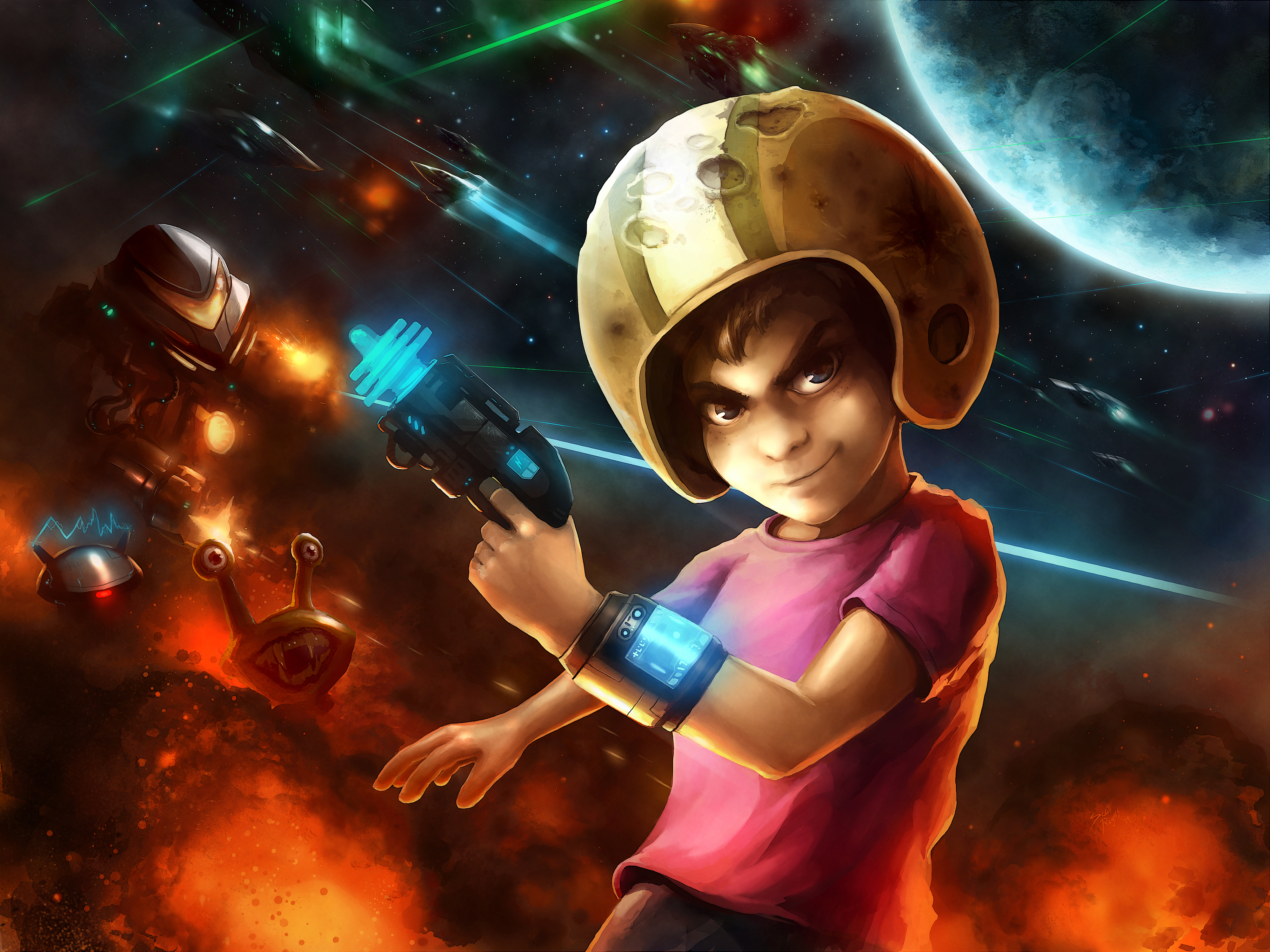 Based on the Commander Keen games developed by id Software and published by Apogee. Wiki: "The series focuses on the adventures of Billy Blaze, an 8-year old boy who travels through space and assumes the secret identity of "Commander Keen"."

Oho, so THIS is who made this lovely piece. I've seen it before while doing Keen google image searches. It's pretty damn epic. I don't see the problem with the helmet, looks pretty obviously like Captain Keen to me. ;b Have you tried the unofficial Episode 7, 8 and 9? They're neat!
The world needs more Keen fan art. Actually, Episode 6 was the first game I played in my life. lol
/end horrible rambling pseudo-review

Thank you very much! I really appreciate your comments. :) I've played at least episode 7, I forget if I played 8 and 9 yet. If not I should sometime. And I've of course played the first 6 and keen dreams, 5 and 6 being my favorites.

John Carmack would be proud.

Actually it'd be pretty cool if he could see this.

Thank you so much! It certainly would be if he saw it. I actually tweeted it and 3drealms retweeted (they also used my drawings for Cosmo and Monster Bash on their site, which is an honor), so they know of it, but I don't know if anyone at id or involved with the Keen games have seen it.

Now THAT is how you do a remaster. You gotta get some kinda team to make a sequel to this

Thank you! Glad you like it! That would be awesome. I'd be up for that if id/3drealms would want me to.

looks like an amped up version of Hogarth Hughes from The Iron Giant movie. The helmet, gun, shirt, and overall look pointed my at a younger version of the character. I really like it though.

Thank you! Glad you like it. I actually haven't seen that movie, but looking up the character, I can definitely see some similarities.

I don't think there's a problem with the helmet. It's how I immediately identified him from the thumbnail after all, so you must be doing something right. The stripes are what's important. Maybe it WAS bright in colors but then it faded with time. Good job with the face too. You can really see how he might be a relative of BJ Blazkowitz (the guy from Wolfenstein 3D). Did you know that? They named him Billy Blaze because it was supposed to be a hint that it was an americanization of Blazkowitz and he was supposed to be the grandson of the wolfenstein guy or 3rd cousin twice removed or somethingorother. And then maybe he grew up to become the doom guy. Nah, why would he join the space marines if he's got an IQ of 314. Maybe Duke Nukum. Duke Nukum's just a guy, not a marine, right? It's time to kick ass and chew gum, and Commander Keen's all outa bubblegum. SHAZAM! Or maybe the half-life guy, since he's a scientist, right? Nah, he looks completely different. Now I want to go and watch the strifetoons series again. Yessir, when I build a spaceship and leave this hellhole of a planet, I'm definitely going to name it the beans and bacon megarocket, regardless of whether or not it's made of cans of beans. Which I guess it won't be. That's almost as ridiculous as the scientist guy on Gilligan's Island making a working television out of reeds and coconuts. But not a raft. Oh, a working raft, that's just beyond him, he's not THAT much of a genius.

Anyway, good to see Keen. 20 years back, could it be that long. Longer, even. Damn. I've got to go kill myself, too much time has passed, man was not meant to live this long. Back in the days when the internet was an unheard of term and commercial video games were.... actually pretty much just like the indy games on newgrounds of the last 10 years. Long later I learned that there was a parts 4-6, not just the parts 1-3 (which I paid for). I learned that when I read the secret out-of-bounds text of an animutation called "French Erotic Film". Damn, I got gyped, I guess I ordered it too early. AHh, memories. Great art in any case. Couldn't do better with it.

Say, what's the cylon looking robot soldier sort of thing on the left? I remember the 2 eyed green martian, and the annoying little sentry robot, but what's the soldier?

Ah, yeah that's very true, the color could be worn. I sorta had it in mind that he would be a little bit older in this anyway.
Not sure I did know that actually, that's very interesting. I do wonder if/how some of the different games relate to each other, if there's any kind of continuity at least in an easter egg/inside joke way. For instance, Cosmo actually saves Duke Nukem in Cosmo's Cosmic Adventure.
It may have been 20+ years, but even that is really such a short time. Who knows how long we could live someday. When I was young, I always played Keen 1 and 4 (since they were shareware). I only got all the rest later, I don't know why I waited so long. I'm not sure if I knew about any of the post 5 or Keen Dreams. I know there are still some fan made episodes I haven't played yet. Hopefully there will be more someday.
The robot is from Keen 5 (named Robo Red I think). But I did heavily alter him. The drawing is mostly based on Keen 5.
Thank you very much for the comments, my friend! :)