For the month of January we have disabled ads on all E-M content. We need 172 people to reach our January goal of 3,000 active supporters. If we hit that, we'll continue with a new goal in February! 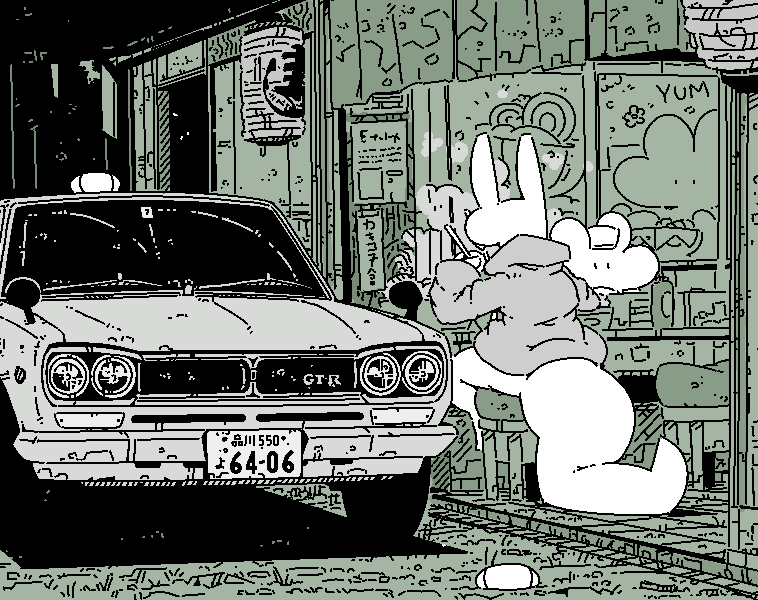 I'd never have called myself a car guy, but recently I've been finding a real love for them through illustration and this is a great example of that. Super work, especially in building a great scene.

i'm trying so hard not to flip the fuck out... you got a Skyline... a GT-R... one of the first GT-R's... the car that really started that line of monsters.

for the people who don't get it. Hakosuka was one of the first GT-R models... well the one that took off the most.

JDM stands for Japanese Domestic Market... pretty much saying "Only made for Japan" = that the car was originally made to fit Japanese Driving Regulations/Rules, same goes for "JDM" aftermarket marques like Rocket Bunny/Pandem, Liberty Walk Works and Liberty Walk Performance, WORK Rims, RWB (Rauh-Welt Bregriff)--okay--okay-- i'm starting to sound like jerks off to cars.

also sorry for the massive explosion of nerd you just read.

Smooth and doodle style i like this soo much try next time animation (for me as artist i know its hard but you can make easy animation how kangaroo eating in ramen shop his ramen and he wiggle with his tail) sorry just idea :D i really liek your art at all another good art keep goin :3

I love the way you do vehicles and backgrounds.
So cool.