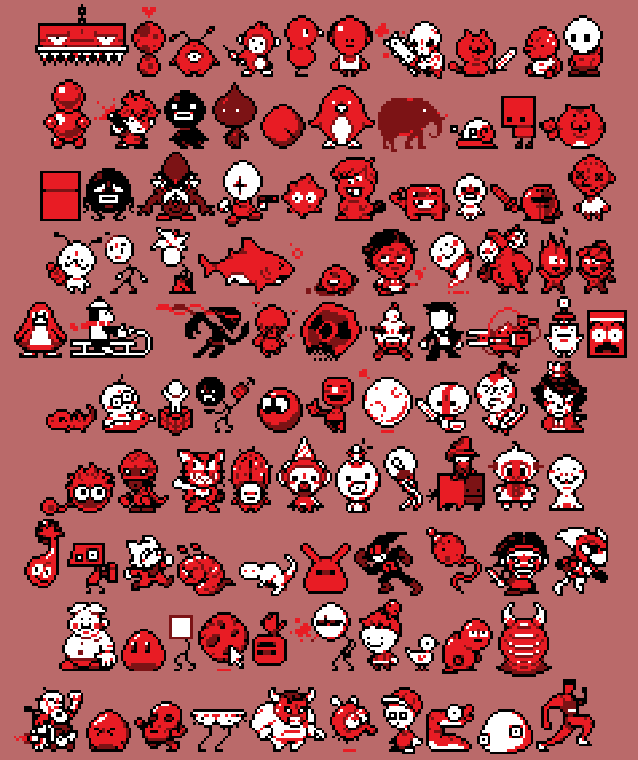 "In July 2017, Microsoft, along with Adobe and their industry technology partners, announced that Adobe Flash Player will no longer be supported after December 2020."

A tribute to Flash in its final days made in collaboration with BrawlersintheZone. The two of us worked together to illustrate 100 unique flash game characters to commemorate the plethora of memories Flash has brought to us both!

It is by far my most ambitious piece, and I certainly hope you enjoy it!

Ordinarily, I often ask people to guess which characters they can recognize, but in this case there are simply too many for anybody to guess all of them!

Very nice art. The red colour makes it a bit harder to tell what is from what game, the alient from Run is hard to know beacuse it's red instead of grey, like many players remember it. But very nice work nonetheless! It inspires me to make art of flash games I used to play.

It was always intended as a monochromatic piece, simply because this makes the artwork much more cohesive and differentiating all characters by color isn't something I think would look very good with 100 characters (You'd loose a lot of the harmony established by monochrome).
It's red on white because this is the colour scheme of Flash itself, which yes does complicate some aspects, I feel overall is beneficial to the piece as a whole.

This spritework is great! I love the use of the monochrome palette and how you both captured all these characters in such small resolution. It makes me feel very nostalgic seeing so many characters that I haven't thought about in a real long time.

Since a lot of the flash games I played are there, let me talk about one that isn't: Dragon Ball Devolution. This game was basically a recap of the original Dragon Ball Z series, which I wouldn't know because I watched Kai, with every fight and win from the series. The famous kamehameha collisions would push towards a person based on the button-mashing of another, making it seem as tense as the anime would have it. The sprites were different from most DBZ games, as they were small and probably chibified. As a Gen Z gamer, Flash was my nostalgia, and that was one of the most unique games to me.

There was certainly thought put in to adding stuff like Mario 63 or Super Smash Flash, but in the end we wanted to focus on the original content that was built in Flash, otherwise it'd just become 100 video game characters.

Oh wow! This is a super comprehensive piece! You guys did great! So many of my favorites!!!!