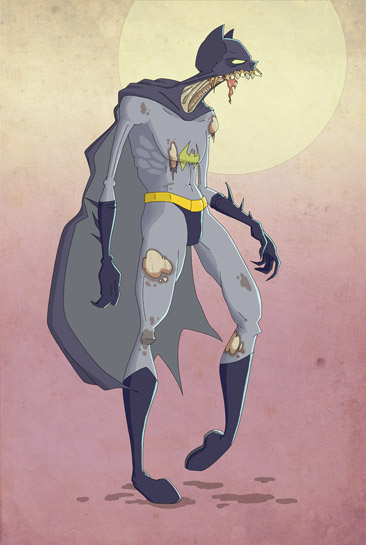 Wow I will say one thing you have a nact for these kinds of things I think you have done very well with this piece nice detail decent backrounds would love to see some blood maybe drops on the ground or some open wounds. nice work here.

~~THINGS TO IMPROVE ON~~
would love to see some blood maybe drops on the ground or some open wounds.other then that this was decent work.

As far as I know, the Marvel Zombie universe has yet to crossover into the DC one. This was fantastic because it was a character who was truly their own. Looking at this, it's almost hard to determine whether or not Batman has a lower jaw. It looks like he doesn't, but it kind of looks like his neck extends where his teeth should be. This also has a background and a fairly elaborate one at that. His fingers look like claws which suit his form as a zombie.

He appears to be somewhat emiciated or dehydrated which is probably what would happen to a zombie. I like how you equally distributed the holes in this outfit. It's that macabre drawing skills that make this stand out. I would love to see a cartoon with him or some other superhero zombies in it. He also appears to be in front of a full moon.

This made me happy, love the fact that the bottom jaw is missing.

Batman is way to badass to become a Zombie! It's not even remotely possible!

if the whole marvel universe with their superpowers and all can turn to zombies then batman doesnt stand a chance with his gadgets and no super powers. thx for the 10 :)

There is no jaw! HAHA funny and original picture.