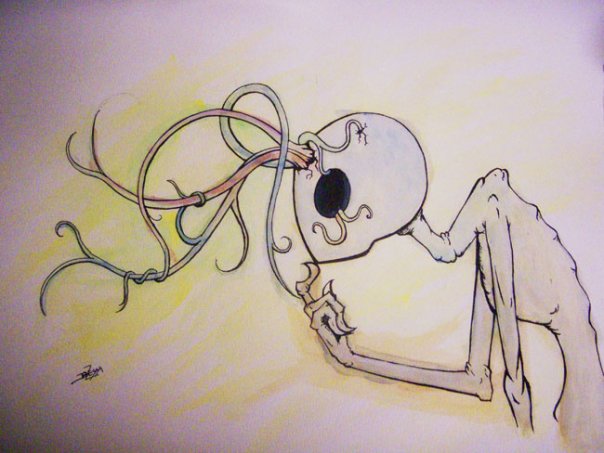 I must agree that I do not know what this is suppose to be? The yellow outline is nice, but should be brighter. The color is bland and should be more vivid.

So sometimes its kind of hard to judge someones art, but sometimes you have too, I think you have a wonderfull piece here but again could use some more efforts and better details, maybe a few changes but not much, anyways notbad. There can be more progress to be made though. I found this one to be interesting I like the antanna like things on his head, I thought you could add some effects there with those maybe a glowing ball of sorts might give off a sense they are alive and whatnot. As this review comes to an end i just want to say that it was a pleasure seeing this and reviewing it, while it was not perfect or bad, it was just right and showed some skill of art and in the end it was pretty decent. some things could be better but its an awsome piece.

~~THINGS TO IMPROVE ON~~
So some slight changes could go here but not to take away from your direction either but once in awhile its nice to change a few things if needed ofcourse so I have a few possible ideas that you should think about. You have a good Installation, here and have outdone yourself. More shades or more detail in the backround, then as stated above maybe some glowing speres on the end of the antannas from his head would be a nice added effect.

You're an amazing artist!

I love this picture. I am in love with Orestes.
I want to run my fingers down his spine and feel every disgusting hardly protected vertibrae.

I really like your obsession with tentecles. It really adds to a picture. Changes the meaning. Gives it a certain artistic quality. Again, I love the fingers. They are all curly. :3

You're a beautiful person who does beautiful things.