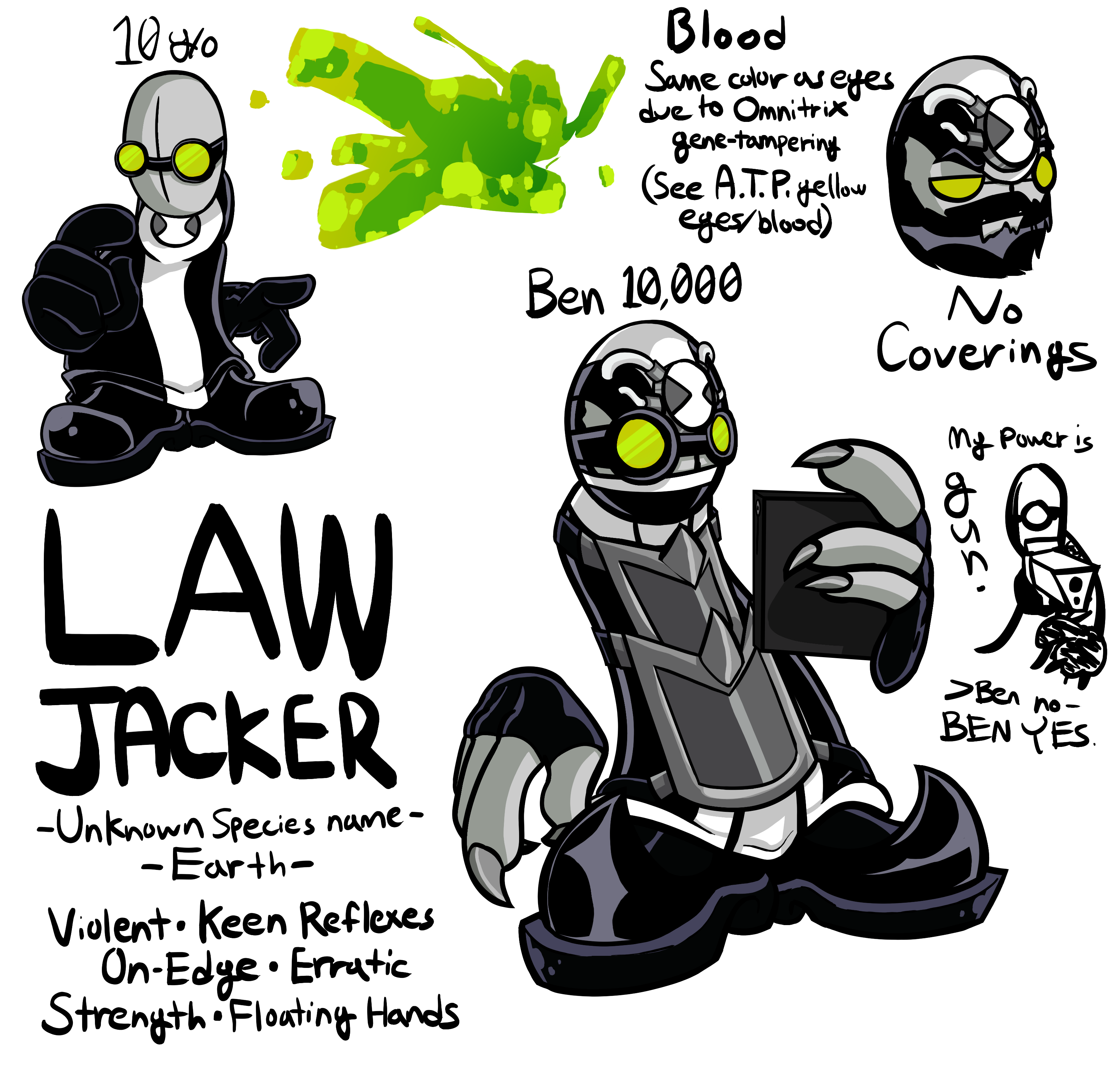 ...Hello hello hello my dudes. How about a weird-ass crossover for your time? My explanation for this is that I've been on a bit of a Ben 10 kick lately (The Ink Tank keeps on appearing in my damn recommended lmao), and considering my current Madness Combat fixation... You get the picture. I decided to go more in line with the OS style, being that's what I have the best memories with (and I've honestly never been a fan of UA/AF's style). How he got unlocked this dude (save for it already being in the Omnitrix somehow)? No damn clue. Had some help from someone on Discord for the name: Other names I faffed around with were "Lawbreaker" and "Lawless". Either way, wonky to figure out what a 10 y/o would call this bundle of floaty limbs and murderous rage. Oh, he'll jack-up the law alright...

Info time! Prepare for a fuckton of text!

- Silvery-grey skin, texture of which feels similarly to clay. Skin is less elastic than human skin.

- Strange amount of similar-to-human characteristics, such as the ability to grow a beard.

- Four-fingered hands which seem to float from the body. Lacks proper shoulders as a result. Hands can only be taken so far away from the body without sustaining damage (signified by bleeding where the wrists would be) and forcing him to return to human form.

- Lack of ears and nose (and hair when younger). On face is a strange feature dubbed a "Facial cross" that seems to be over where the center of his face would be, intersecting down where the nose would be. Does have eyes and a mouth, though is capable of hiding either or both without inhibiting senses and the ability to speak, revealing eyes the same shade of green as his human form and his mouth having more pronounced canines.

- Lack of distinction between neck, torso, and where the hips would be. Body shape is akin to that of a tube or column.

- Physically sexless (Though seems to lean masculinely, with a deeper voice and retaining the beard from Ben 10,000's base human form)

- Surprising physical strength despite lack of proper arms, capable of throwing blunt objects with enough force for them to easily pierce flesh.

- Strangely reactive blood. Species normally has bright red blood akin to humans, but it can greatly and permanently change color in response to genetic tampering with the host. "A.T.P." units are a well-known example, having yellow blood from gene-altering for increased durability and physical strength, among other things. In the case of the Omnitrix's sample, tampering for optimal physical and mental status has conditioned Lawjacker to have green blood the color of the Omnitrix-wielder's eyes.

- Keen reflexes, comparable to a "sixth sense" for sensing danger and watching eyes.

- Nature is immensely violent and aggressive. Coupled with his ability to sense incoming/possible danger, leaves him seemingly perpetually on-edge and often leads to immensely erratic behavior.

- Seemingly innate skill in combat and with weaponry in general. Melees, slug-throwers, energy weapons, bare hands. Oftentimes seen mixing acrobatics with weapon prowess and switching between weapons with ease, along with being prone to throwing his weapons.

- Sensitive to the presence of unnatural psychic phenomena, which this form consistently refers to as "Dissonance". This is most intense when in the presence of outright magic and other bizarre reality-altering phenomena.

- Sensitive to the scent of smoke. Particular form shows immense disdain for it.

- Not emotionally sensitive to the sight of brandished weaponry, immense violence, or gore.

- Very difficult to get the drop on. Keen senses mixed with being able to sense the presence of others and watching eyes.

- Agile and acrobatic despite bizarre anatomy. Coupled with physical strength, keen senses, and prowess with combat and weapons makes him a difficult combatant head-on.

- Floating hands, though not capable of reaching far, can still be used to bypass obstacles that would be impassable with attaching lengths getting in the way.

- Not the most diplomatic. Antsiness mixed with general aggressive nature and off-color sense of humor makes him not fit for non-violent negotiation unless being brought in for mere intimidation.

- Though has a high pain tolerance and threshold, is comparatively fragile compared to other aggressive heavy-hitters. Less-elastic skin is prone to being easily torn. Comparatively a glass cannon.

- Not as flexible as a normal human, especially in the leg/feet area.

10 y/o : Black jumpsuit with a white stripe down the middle attached to a white ring around the Omnitrix on the chest. Black shoes and gloves, black goggles with bright green lenses.

Ben 10,000 : White jumpsuit with a long, black jacket over it. Jacket has a white stripe down the middle and around the bottom edge, along with a white ring mark around the neck/shoulders area. Most of the time wears a black-and-white bandanna around bottom of face, and wears similar green-lensed goggles to his 10 y/o outifit. Omnitrix location on forehead has synthetic growth over top of head connected by white wiring. Wears metal armor over front, held up by straps. Has black fingerless gloves and black shoes with pointed, upturned toes.

- I used OS designs as reference

- I wanted to retain the primarily-dark color palette of normal MadCom designs. I ended up using designs like OS XLR8 and Diamondhead as reference. The "white stripe on black uniform" look ended up fitting even with Ben 10,000, as his older human design had a black shirt with a white stripe which contrasted young Ben.

- I originally wasn't sure what to but on young Ben's head/face, but eventually decided on goggles like Hank. Other lenses and head wrappings didn't work, and having nothing there felt weirdly naked.

- I referenced off of Jebediah Christoff for the armor on Ben 10,000. I originally attempted more head wrappings to go along with the bandanna akin to Hank, but it felt too cluttered and didn't want to cooperate.

- Figuring out the shade of green to use for the lenses/eyes was a massive pain in the ass. The green color did not stay consistent between aliens/characters in OS lmao.

- I gave 10,000 Lawjacker wires on his forehead Omnitrix like how it looks on his wrist in human form, implying that it's growing into him. Thought it fit the grungy-looking feel of regular MadCom.

- I used the sharp toe shoe design from the MadCom fangames illustrated by MindChamber (Madness Regent, Madness Accelerant, Madness Hydraulic) for Ben 10,000 because I thought it looked cool. I originally thought about doing it for 10 y/o Lawjacker, but it ended up looking out-of-place.

- I did the remark about disliking smoke because... you know what tends to happen to smokers in MadCom, right? >8}

This took me way too damn long. I hope you like it!