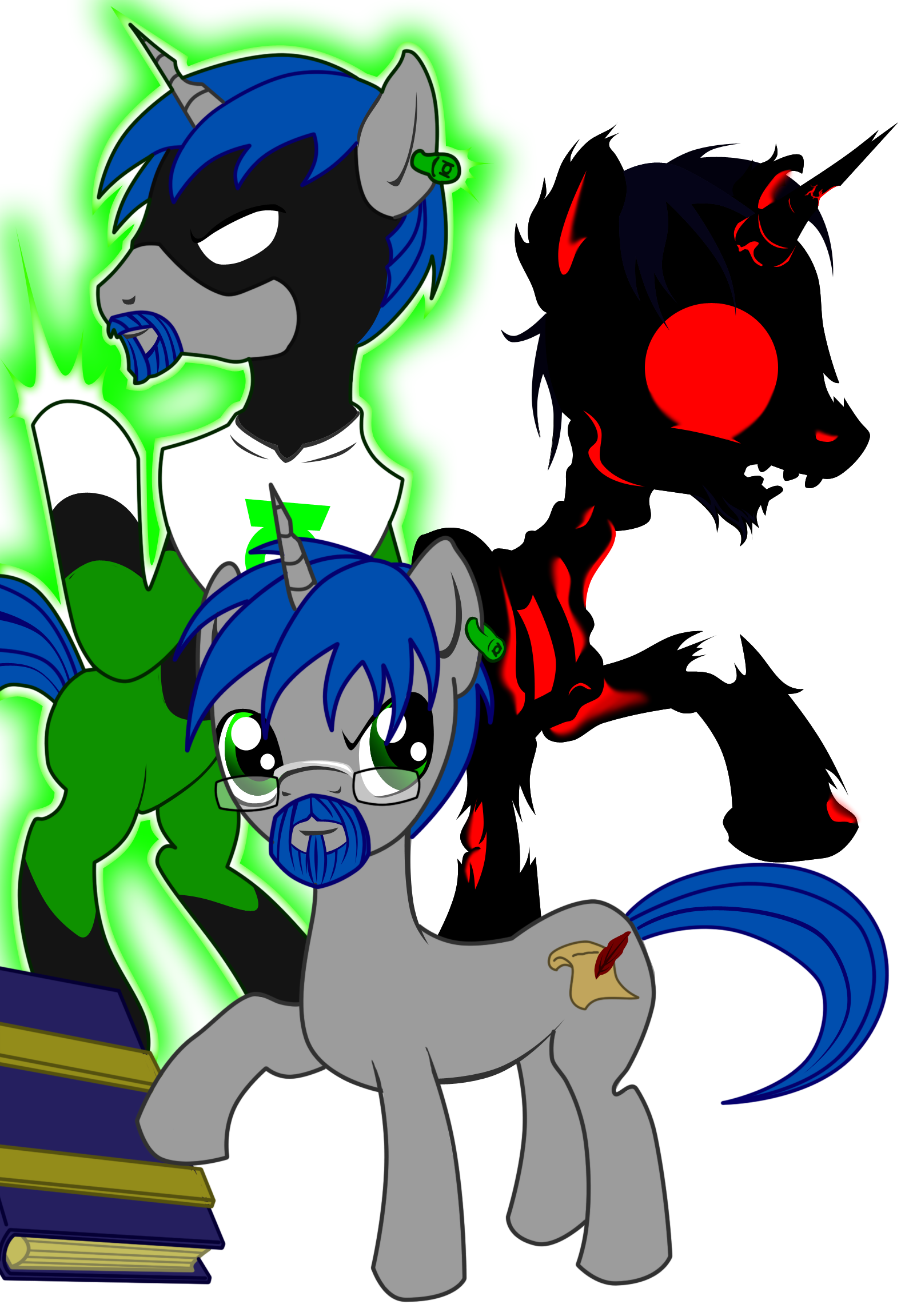 This is myself, ponified. Yes, I am a brony, yes, I watch the show.

Blue Parchment is a Unicorn Pony employed by the Canterlot Library as a historian. His duties often take him all over Equestria in search of historical texts. Respected professionally, he is told by some that he is socially awkward, though he often denies it.
Later in his career, he came across several mentions of a proposed pony village in the Ever Free Forest that would serve as a living area for farmers near to the ancient castle of the Princess', which was long ago abandoned. He later made his way there in search of any evidence of the village called "Sunny Town"

Green Lantern: The world Equestria exists on was for a long time in the Unknown Sectors. Witht he recent approval of the Guardians of the Universe, the Green lantern Corps. extended its jurisdiction over Equestria. Lantern Parchment became the first Green lantern of Equestria, and used his ring to help ponies in trouble while on his travels.

Cursed Blue Parchment: (see "Story of the Blanks" [link] )
Blue parchment eventually found Sunny Town, deep int he Ever Free Forest. He was startled to find that the town was intact and seemingly bustling with life, but no sooner had he entered, then he noticed the curious circumstance of no pony possessing cutie marks. Approaching a pony called Three Leaf, he made some inquiries. Being late in the day, the sun began to set. In the middle of his inquiries, Three Leaf apparently noticed his cutie mark, and ceased speaking immediately. Blue became startled when, no sooner had the sun disappeared behind the trees, then the village around him began to decay, and whither. Staring around in horror, the houses caved in, wood rotted, and the ground died and turned muddy and slimy. Every pony around him, who had all been giving him very cold and intentful stares, vanished. He was about to make a hurried escape, when his back feet were seized by skeletal teeth bursting from the ground. Stunned and hurt, he attempted to summon the power of his ring, or use some magic, but all around him the Sunny Town ponies emerged, tearing the ground apart in their eagerness to reach him.
Managing to use his ring, he took flight, onto to be seized by greedy mouths, the moaning, crying, and howls of the zombie-ponies clouding his concentration as pain dragged at his consciousness. Crashing into a broken building, he found himself impaled on a splintered beam, and was quickly set upon.
His ring leaving him to find another, he now wonders Sunny Town, searching for the answer to the mystery Ruby, the vanished filly. He will never attend to you should you ask him, but at night, he will ask you "Why did you come? Why did you come here? Did you ignore the signs, as I did?"

My cutie mark is a parchment and quill, symbolising my love of history. I don't actually wear glasses, but I have tried them on, and people tell me they suit me, so I gave myself some as a Pony ^^