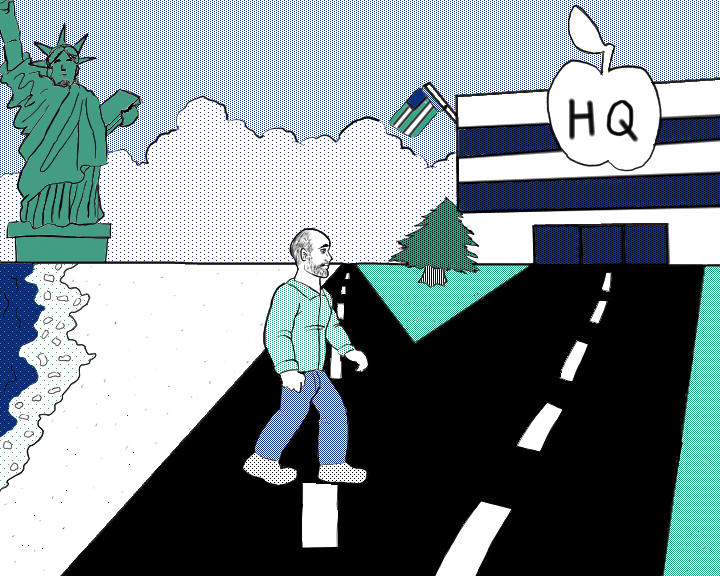 The Father of Forums 3.5

Edit: This submission was originally in black & white and I considered this a sketch. I have since added a limited color palette, slightly cleaned up art, and other details.

Driving to the Apple headquarters took another two days, leaving Fro with less than a day to get this shit over and done with, but fortunately the first major hurdle was dealt with, as the guards for the entrance had been bribed or replaced by mafia goons; and the last one was also dealt with, as an aircraft to take him to Pennsylvania had been situated nearby. His dog barked at him on the way in, and then pissed on a fire hydrant, which he wouldn't come to understand until a little later. Looking at the floor map, something presented itself as suspicious almost immediately, which was that it indicated there were several underground floors that the first visible staircase did not seem to lead to. This itself wouldn't mean much on its own, but on one of these floors was the office of one Steve Jobs, which was very suspicious indeed, as from his cursory research of the building he was in, it had only been in use since 2017, six years after Steve Jobs had died.

He knew what to do to get down there, so acted upon it. One of the guards who hadn't been replaced with a mafia goon entered the elevator, and Fro followed suit, knocking him unconscious and finding one of those slick-looking keycards, which he pressed to the elevator control panel, whereupon it revealed several extra buttons. He hit the one for the lowest possible floor, and when they arrived his dog barked and pissed on another fire hydrant. There was the office, curiously unguarded, and when he stepped inside there was a large screen and, more importantly, the disk containing the Ruffle software on an also curiously unguarded smooth white table which cost 15,000 dollars.

As Fro approached the screen lit up, with Steve Jobs' face on it. Fro was confused and not amused by this.

"Nothing much, dipshit." said Steve. "I'm just here to inform you that the moment you touch that thing you'll be shot at from all sides, mister...Fro."

"I was being sarcastic."

And with that last statement, Fro burst into a flip, careening over the table and nabbing the disk as he passed by. Bullets flew at him from all sides, but only one hit him, and that one got blocked by his chest hair. Guards pooled in from where he'd entered the office, and Steve Jobs' big dumb face laughed at this development, but the labradoodle barked, and as it did so Fro realized what it had been saying. If there were fire hydrants, that meant the building was health and safety compliant, and that meant...

"Fuck!" said Steve Jobs, as Fro headed out, carrying the dog and the disk in each hand. The guards thinned out on the fire escape and were then easily picked off as a mafioso screamed "I make-a the meatball!" and opened fire on them. With this over and done with, he ran to the aircraft for a fairly uneventful flight to HQ.