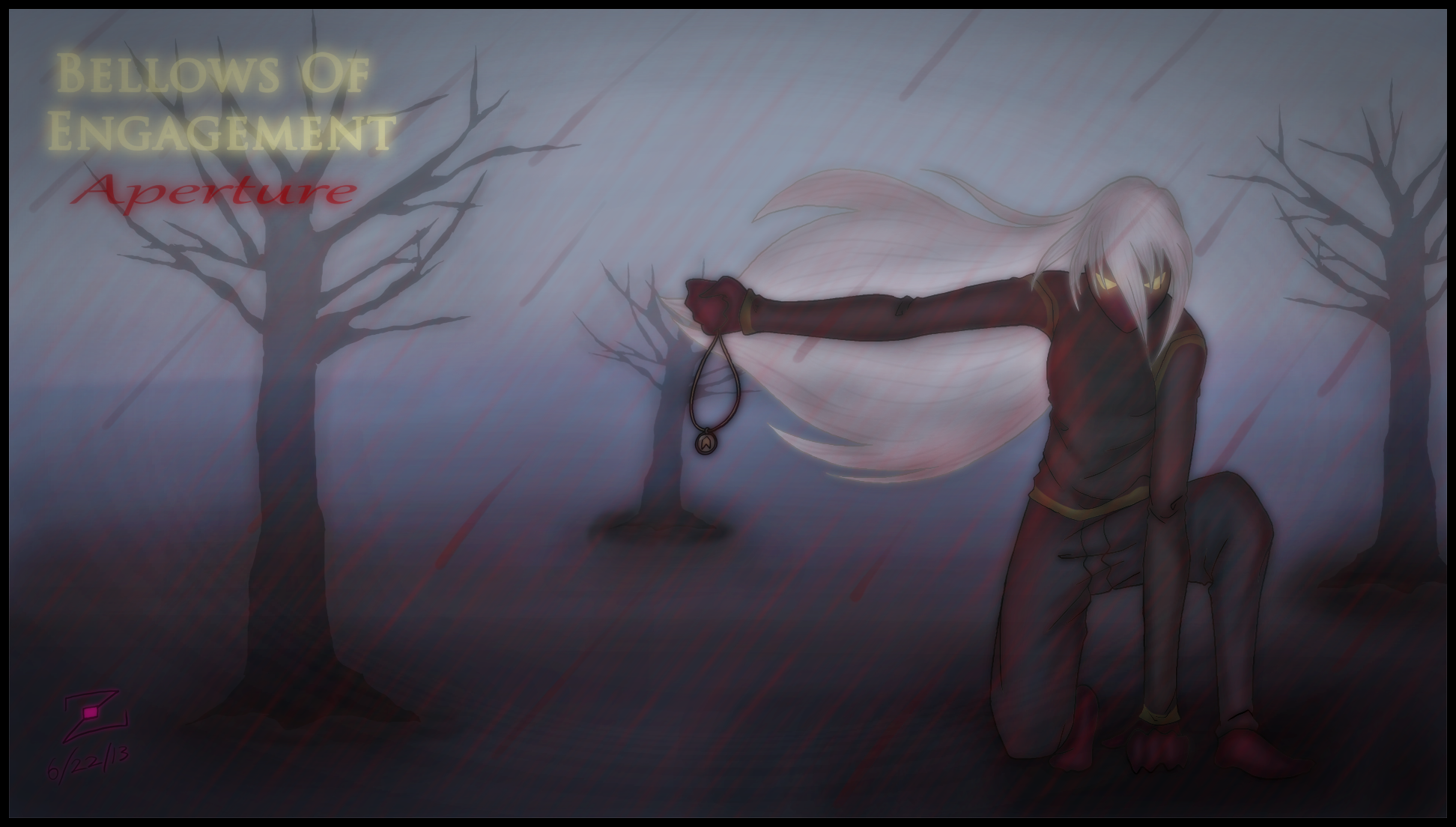 This is a character I designed for an imaginary fighting game, I like to call Bellows Of Engagement. This is also my first time genuinely trying to paint a background digitally. Anyway, here's the (long) bio for this character:

Goal: Being reunited with his lost love

Backstory: Aperture was once known as Adam Satori, a happy man who was ready to start a family and a life of his own. He'd worked hard to get to where he was in life, and nobody could take away the fruit it bore just for him... or so he wanted to believe.

As he stood anxiously waiting at the alter, he stared longingly at his bride-to-be; Elizabeth. Their eyes connected for just a split second, tears of bliss falling down her rosy cheeks, and a soft grin growing across her soft lips. Adam didn't yet understand that this was the final moment in their blossom of love.

"What is- urgh!" came a sudden and pained cry from one of the seats in the back of the church. The man who had screamed was lifted into the air, by the massive talon-like ethereal appendage that pierced him through the midsection. Blood dripped from the gaping wound, as well as his mouth, staining his meticulously well-kept suit. The young man's eyes begged for help as he whimpered, before being violently thrown across the room and slamming into the wall, no longer to feel the pain of his life ending.

Everyone gasped in horror, a demonic shadow of smoke looming over them all. It slowly retracted its murder weapon, making its way down the center aisle in the church. Wisps of black death emanated from his body, homing in on everyone in the church. As soon as it touched them, each and every person began screaming in agony, writhing in what must have been unbearable pain. But all too soon, the screams stopped, to be replaced with horrible gagging and retching. Then... nothing.

Adam could only stare, as the monster hovered closer and closer to his love, the look on her face just as shocked as his. Her father had already fallen dead, leaving her utterly petrified. Adam suddenly got a hold of himself, and in an unbridled rage he sprinted toward the entity of hatred before him. "Take me instead!" he begged, thrusting his arms outward, closing his eyes tight, and hoping it would be quick. Unfortunately, that moment would last longer than any other in his short life, as the beast ignored him completely, instead giving Elizabeth the same treatment as all of the others. The raven colored smoke made its way into her lungs, corrupting her from the inside.

Adam lost connection to everything that was real in that very moment. He couldn't hear Elizabeth's screams, everything around him swaying in silence. He wasn't even sure he was alive anymore; it all felt like a dream. "Why...?" he muttered, shocked when he actually got a response.

"For pleasure... for the sake of corruption... and to bathe the world in sin. Everything and everyone can be tricked into betraying their beliefs. If you want her back, you'll have to sacrifice more than just your life..."

Adam listened closely to every word, as Elizabeth slipped away from him. When her last breath had finally gone, and her eyes went blank and lifeless, he understood. Looking back up toward the demon, he slowly opened his mouth.

"Kill me... kill me, so that I may take your soul. No human can obliterate a hatred such as you. So I have no choice but to descend to your level. I will one day be your end, as you will be mine in this moment," Adam replied blankly, no emotion left in him to give. He made his way to Elizabeth, gently lifting her head, and unwrapping the beautiful locket from her delicate neck. He glanced down toward her eyes one last time, as the demon grinned, and took Adam's. The only way for him to defeat such a monster, was to become such a monster...