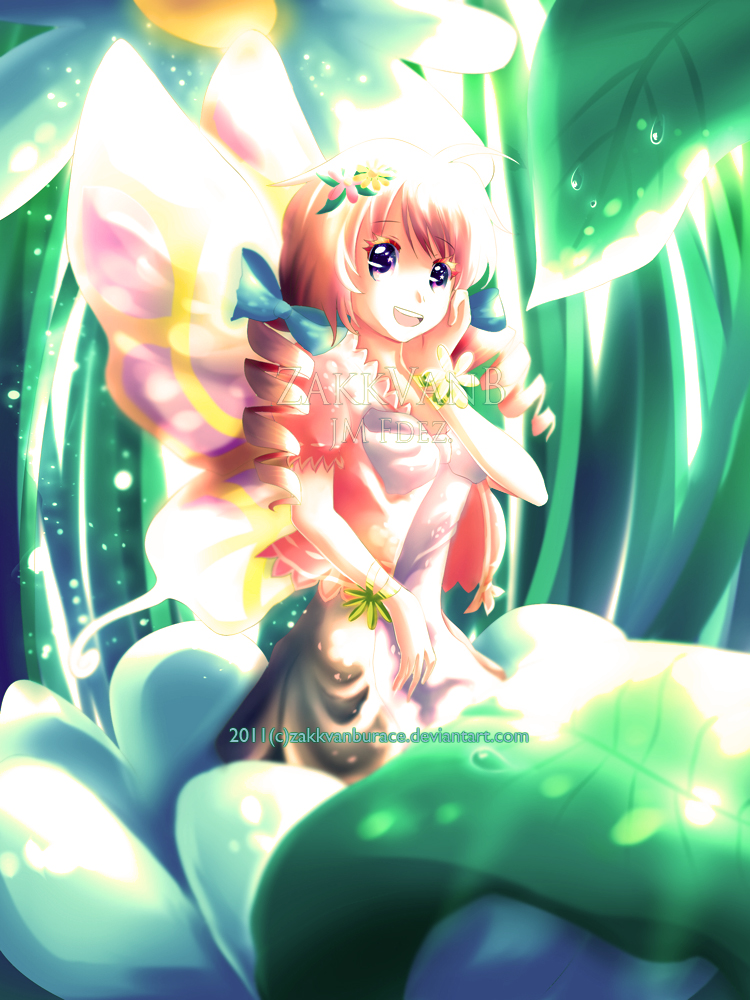 Hi! =D
This is the kiriban prize for Mikan-Sweets ! She's her fairy OC, I hope she likes it! :D
(I know, veeery luminous XD)

I took a good long time to look at it before I decided to review it, and I have to say that it's amazing.
First off, let me prepare you for what you are about to view in case you don't like long reviews.
The one aspect of this piece that captured me the most was the professional detail that you put into it, and that, I think, is what really counts in any - and quite likely - most artwork, because in my opinion, it's the detail that really counts. You might not agree with this, but that's just what I think, and the way you etched in each and every little detail just blows my mind, and being a huge anime freak, that makes me love it even more.
Now, the first thing I noticed was the intensity of the illuminous lighting that I'm sure was pretty difficult to coordinate without screwing the whole thing up, and even though I'm a guy, I kind of like it that way. It calms me down.
And the character just absolutely glows in every way, and just the sheer cuteness of her expression just makes me happier than a tornado in a trailer park (and yes, I'm part-redneck).
On to the more professional critiquing: It is evidently clear that you know exactly what you're doing here, but it's the way you show it that really matters, especially with the finer details, like the small drops of water on the leaves both on the top and the bottom of the pic, and that right there is, I think, how it should be done. You've easily nailed that part.
As for the character herself: Jaw-droppingly beautiful. Each and every line ws accentuated perfectly throught her posture, which is incredible to look at. In fact, she looks like she could be the main character in an anime show, but that's a little irrelevant.
Moving on towards the wings. Pure magic is what I see in them, because after, fairies often do have magic abilities, don't they? But what I really liked about the wings was the pattern that you chose for them. I absolutely adore that pattern: It also represents a kind, loving, and caring nature, especially with that smile. She also seems like an innocent young girl with a knack for adventure. I don't know where that adventurous attitude comes into play, but it is a possibility.
The detail on the eyes is amazing as well. (Hey, can't forget the eyes). What I admire most about them is that they sparkle in a way that represents purity and calm. In her eyes, I see - and this is just a wild guess - that she was always very popular with everyone as a kid, and as a young teenager, is even more so, and everyone loves her. (I do.)
As for the hair: It is just amazing, and it really grabs my attention, because it just stands out. I especially love the curls on it, which, again, mark an innocent yet caring nature, because hair like that doesn't go unnoticed.
Now for my favorite part - the clothing style. One thing is for certain - it would definately win an award or two at a dashion show, because the concept of her dress is spectacular, including the way it just molds to her and smoothly flows around her as if it were a river with a perfectly flat bottom. And the bows are a really nice touch, especially the one just above - or below; I can't really tell which - her chest, because it stands out from the rest of them.
All in all, an amazing piece. You've done some fine work with this one.

I'll be expecting even bigger and better things from you in the future.

It's good, but I definately would have given you a much higher score if not for how bright it is, you went a little overboard, I think. Don't get discouraged though, just remember for next time! : >

I really, really dislike how bright it is though.