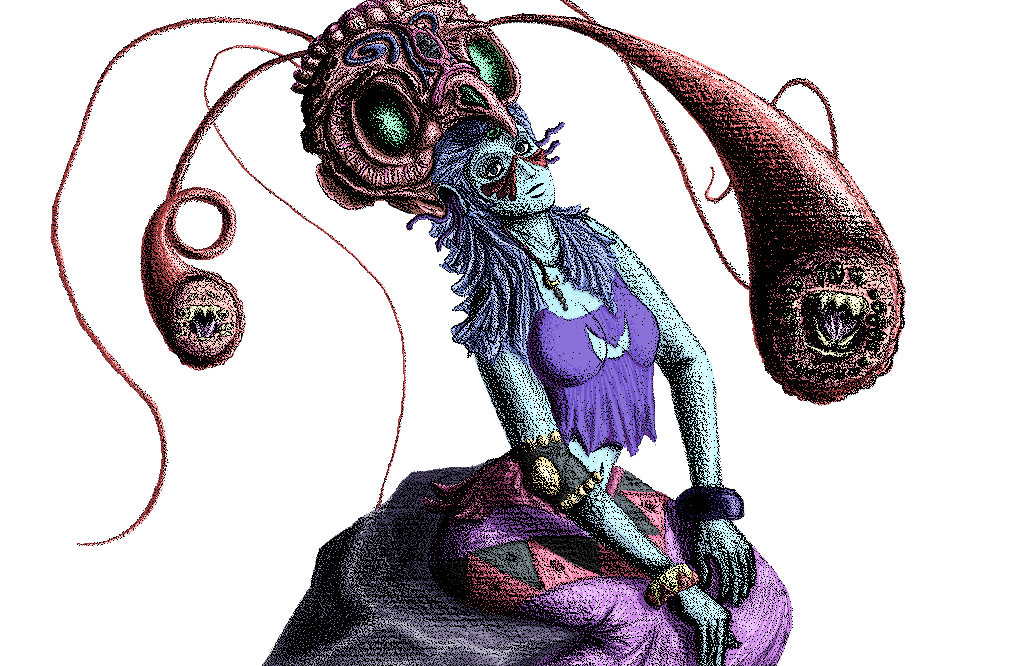 This is a character concept for the healer of a game that I want to make when I have some time to do so. The picture started life out as a pencil sketch that I digitized into a pure monochrome black and white (no gray scale) low res image, using a program called ditherlicious. From there I removed all the white pixels leaving only black dots and then proceeded to add color, soft shade, and highlight behind said black dots. I like the dithered look this method gives, and will employ this for the actual in game graphics.

She is from an ancient race, of a once dominant civilization, that has a high degree of control over their blood chemistry. Said race can synthesize their own painkillers, and even share them with others (via vein injection). Needless to say, they tend to liberally "self-medicate". (As you can see, Saoirse is pretty checked out right now.) This is absolutely fine from an evolutionary standpoint as these people for the longest time had no natural predators/enemies. Just as easily as they could share vitality or administer an analgesic, they could also instantly give anyone/anything a stroke, by directly injecting a clot into their victim's blood steam. They also feed through their veins, in a similar method to the liquefying process that spiders use on their prey. (Their mouths only exist for breathing and speaking, they retain vestigial teeth from their humanoid ancestors.) The collapse of their society is speculated around the combined result of a great plague that fiercely drove down their numbers, overuse of their natural opioid secretions, slave revolt, and the advent of effective plate armor in the neighboring civilizations. History is seldom pretty.

As for who she is as an individual, shes very knowledgeable on humanoid vasculature/anatomy, exudes a relaxed demeanor, has a modest fascination with the sea, and is staunchly opposed to monarchy. She has considered that the suppression of the masses for the betterment of the few is what led to the collapse of her civilization, as well as all other fallen societies.

She claims to have a direct link with the with the fabric of the cosmos, and will give fortunes when increasing a character's max HP.

Here is the initial sketch.