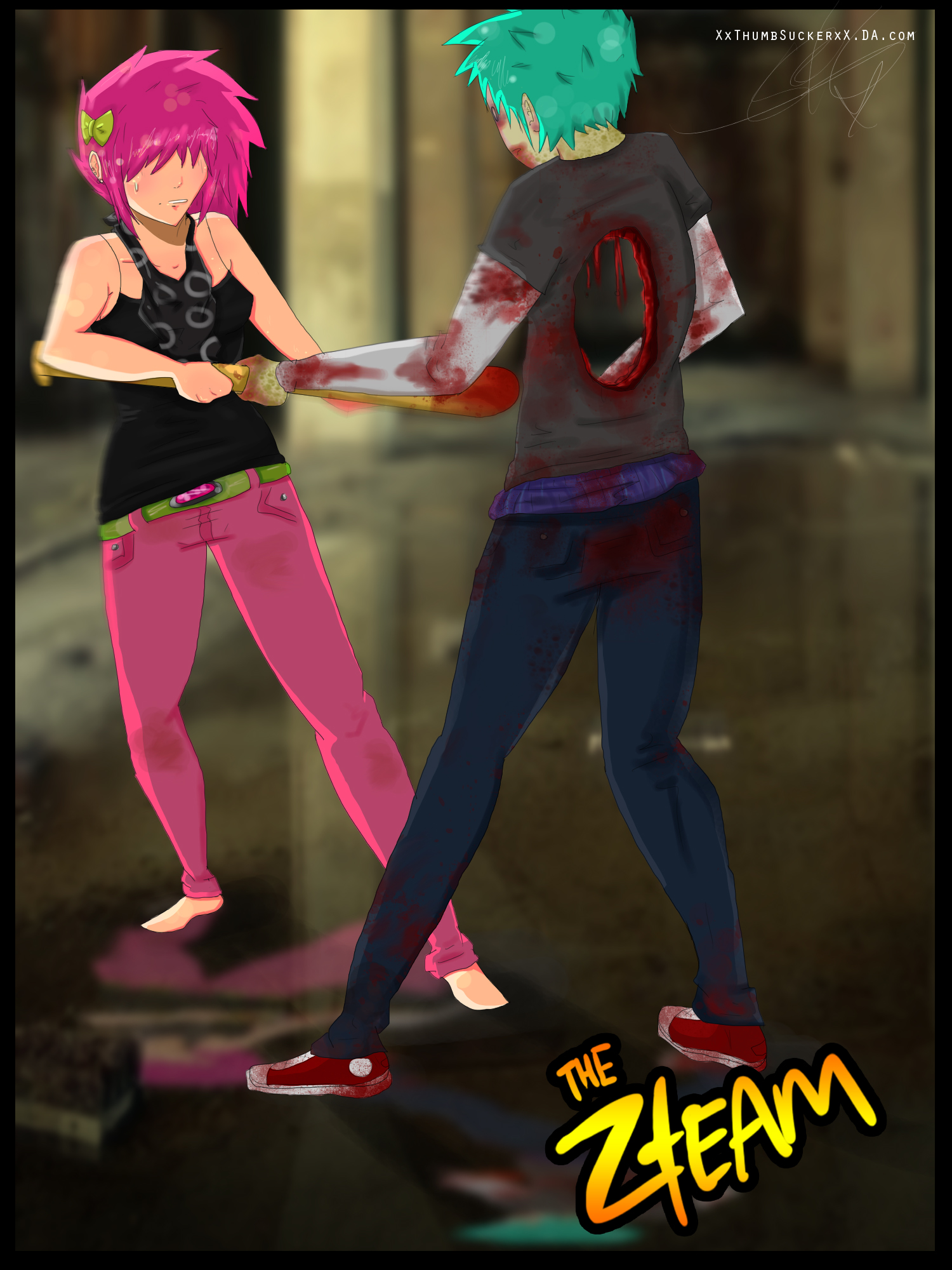 Give It To me!

Woo.
To celebrate being free again.
Haven't done anything Z Team oriented in a while, so I'm pretty proud.
I'm aware there are plenty flaws, but that's ok.
(: x
Next up I think I'm gunna draw a picture for this cute girl named Jude~
<3 hehe wish me luck!

Rowan: Hey look guys! I think I see another survivor! With awesome hair...like me! Oh man, I hope his girlfriend is a zombie, move over guys. Rowan's got boobs to show off.
Brody: Uhm, That's sweet & all Rowan, but unless you're into necrophilia I doubt he's your type.
Mike: Yeah, & Look at that huge fucking hole in his stomach!
Brody: That was my point dude.
Mike:..Oh.
Rowan: Drat! The one hot guy I see in months & he's too obsessed with eating my brains to even ask for my number.
Brody: Why don't you go say hi.
Rowan: With my bat?
Brody: Of course.
Rowan: Damn straight.
~~~

Thus leads up to this. Just thought I'd illustrate part of my script. (: x

There are a lot of things I could nitpick on here, but when I step back and look at the big picture you mostly have the proportions right and things look nice and steady. It seems like with a bit of tweaking you could fix this up a lot.

One of the odd things I noticed about the characters' postures is the way the knees don't seem to bend the right way. Either they just don't bend at all, or perhaps the slender proportions of thighs and calves make the positions seem a little unrealistic. In addition to the zombie's left leg being a great example of this, the girl's right seems not to have quite ENOUGH of a bend in it, and other minor things like the zombie's right calf just seemed slightly -off- to me.

The slight blur on the edges and on the floor reflection are nice and bring focus to the characters and the center of the image, although I felt the reflection was just a little too clear for my liking. Still, the bright colors maintain the focus; in particular, the girl's pink hair and pants give her a certain vibrant appearance that stands in contrast with the more grayed-out zombie.

As far as other colors go, the girl's scarf seemed to blend just a little too well with the tank top, which, for a moment, gave me the illusion that they were the same piece of clothing until I zoomed in. Perhaps a slight color change there would have been welcome.

Finally, and most importantly, the first thing I noticed about this picture that kind of annoyed me was the depth of the hole in the zombie's torso, or rather, the lack of depth. The clothing isn't bloody enough, but more importantly the hole makes him appear paper-thin. Simply adding a nice big crescent there would have made it look much more realistic, even if it would have made the hole look a bit smaller.

Thanks for the background story.
Funny concept!

It was pretty good. As you mentioned there are problems. It isn't a perfect piece but I'm not saying it's bad! :O You just have room to improve. Keep drawing! It gets you places :) Just don't give up on your art because of a bad comment. Ignore them and keep trying. I do like your color choices. They are very appealing and vibrant but at the same time dark. Very nice :] Great job and keep going! :o

aha Thanks you (:
Yes, an artist can always improve & I'm ok with that. I'm quite young so I don't stress about these things. Thank you very much! xx

The first thing I actually notice about this submission, after reading your script is the odd manner she's holding the bat almost robotic like. I find it hard to believe someone would hold a bat, even in a situation like that, quite like the way she's holding it. I do like the hair, as you mentioned as well in your script, I think that's the best part of this submission because it brings a sense of color to an otherwise dreary and dark scene. It's a neat little picture that certainly has some odd parts to it, but all in all it's a funny little thing to look at.

Thank you, see the whole point of my comic is comedy. Most people shoot for horror & just the shock factor of everything. But I like my characters to not care as much, and focus more on stupid puns & gags. Plus this pink haired character, Rowan is a bit of a ditz. Not saying she's a complete idiot, but I like her to have a sense of cluelessness & lack of realization that she could be in danger. I agree with the bat, I wanted to fit it in & spent well more than an hour trying to do so. I pictured her trying to swing & then the zombie grabbing it, thus causing this back & forth tug of war kind of thing. I think it worked out nicely, but adding motion is very hard for me. I'm used to one person portraits mostly, so this was a BIG leap for me. Drawing two people in one picture, then having them interact. I think it's a good first try though. Thank you very much for your review! It was very helpful & I agree with all of it. So thanks, I really appreciate it. (: