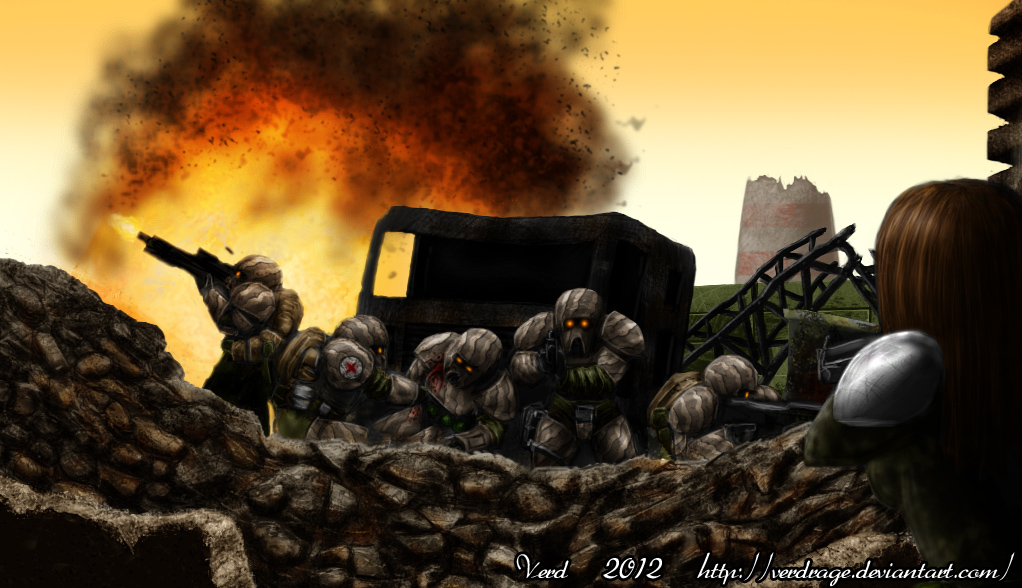 good drawing - on your standard not me .

i hate to say but most of your picture seem to some how --- having emotional problem .

well i see is that you don't seem to be able to draw multiple and i mean alot character in one single panel of picture isn't it and what if you draw a picture bigger than this one 4 time or 5 .

so just a advice seen i see alot artist around seem to be -- self teaching having the same problem --- they can't draw many character and -- FULL detail scenery -- and the real cause is some where in there subconcious mind , that make them shy and hesitated to do it -- it real , but you don't need to worry about that --- if you try first let try to draw all of every character you draw so far do some normal activities .

you know like checking radar, checking gun , talk to each other gesture , laughing , jump down from space ship -- give us some normal routine of a space hangar deck or a sea deck , give us some thing that doesn't include war much , give us something that included more HUMAN than machine , than gun and cannon and rocket weapon and destruction , give us the scent that even before all war devastating there is still humanity left in us -- because after all , war is a mean to manipulated the society , it doesn't solve anything but it only used to control further control of the established hierachy . It horrifying and disgusting .

and if you can express it by your pencil or photshop hehehe , ok that it bye bye now .

oh and if you try and interested in it -- try to tell other artist around too -- might as well have them try to cope with you and draw multiple character and something friendly not about war ----- let set up a goal -- you draw fully detail gesture left to right up to down depth far away and closer 20 character .

do that a multiple time and then move to 30 40 even on space ship etc...... and then move from simple gesture too -- COMPLEX one , that make you need to train your hand on doing it , OH yeah .