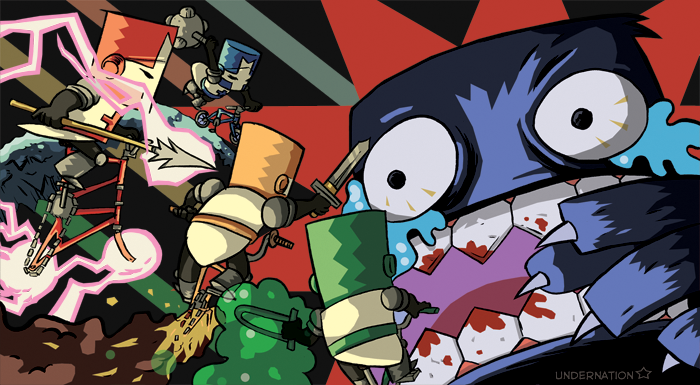 Did this for a flash gallery. Not much of a fan art guy, but I dig this game.

Alright frontpage, maybe I'll get some respect around here!
Thanks for the comments guys, they're much appreciated. Except one, you know who you are....

This is a truly awesome picture because it shows everyone being represented so well. I love how you can just get out and touch some of the shadings (or so it looks like that). I think my favorite is probably the green knight, he's just so good with shades. I have no clue how the guy is that they are fighting. I haven't played the full game, so I assume it's a character from that. The pink lights highlighting their weapons are great too.

Pink? Maybe it's time for the pink knight to appear. It looks like they're riding on bikes all of which are individually made of each of their own powers. There are these colorful streaks and I can't tell if they're supposed to be coming from the monster or coming AT him. It's just a wonderfully detailed drawing.

Cann you do a castle crashing the beard one next?

Probably my last Crashers one.

Amazing artwork, though the red knight's eyes seem positioned a little bit strange. And also, I gotta wonder, who are they fighting in that picture? And I just noticed but, are they riding bikes!?