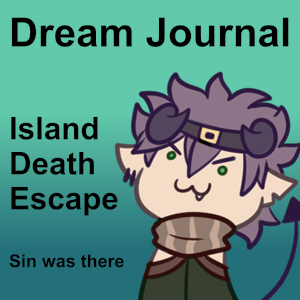 Alrighty, got me another vivid enough dream for me to write down as much as I can before I forget. I wrote down what I remembered, and now I'm writing it in "linear" order.

Notice before reading: Death happens, as indicated by title

The location is on an island, and everyone is trying to escape. The island itself is what kills people, although people will kill people, too, obviously. But its that the island is dangerous and will kill everyone who stays on it. This story featured Sin as one of the people it followed along with, and another guy. This was their third time restarting here on the island that will eventually kill them. This dream was apparently two extra stories longer, but I can no longer remember what happened the two previous times that Sin had died.

Current time: Daytime. Afternoon. Probably around 4-6pm. Sin was done with this round as it began. I remember the concrete building that everyone started in, lit with an orangey hue. There were two stories, and the stairs up were made of carved wood and log railing. the stairs were really old and dusty. Sin was really done with this round. i know he said some scary things around not really caring about anything this time around. The "i'm going to die again anyways" type of things.

He started to nonchalantly wander around doing things that I can't quite remember. He decided he wanted to play around instead. People were starting to die by now. I know that it seemed liek there were traps or people dying of unexplained reasons. I remember a girl was dragged out by the ocean undertow and drowned. I watched that happen. She died around sunset. I remember that I watched Sin looking for something the entire time up until it was that time. He talked to four gnomes that were at the bottom of the staircase near a lathe. They were carving oddly shaped branches into [items] of some kind. The [items] were a very abstract thing, and i could only determine that they were long and oddly shaped [items] that the gnomes were handing to people.

I believe the gnomes were what could be considered "staff" for the island, as they were extremely calm about everything and seemed to be providing more excuse for people to die. After this, it was starting to get darker, and i remember Sin mutter to himself "I finally found her" with that excited smile and laugh. With that really creepy tone from someone who's also done with everything. he said it so loosely.

It was dark now. Sin and the friend he started with at the beginning found and released a moose from some carry drawn vehicle I think. this was very vague, but the moose was important to release. This is where SIn and friend split up. Friend went with moose. Sin went to the back of the carry and grabbed [someone] out from the carry. It was a small someone that I think would have been around 3ft 7in that he was holding in his arm. This someone was not moving and rather limp.

The next day rolled around, and the juxtaposition between everyone dying last night and the scene before me put me in disarray for a while. It was a sunny afternoon, and Sin was on the beach smiling and laughing. With him was a young mermaid of which I am certain was the one he picked up last night. She was small and cute, she had green mermaid parts and very bright blonde hair. Her hair reached down to her shoulders. From this scene, it seems that Sin had spent the entire day playing with this mergirl as everyone in the background was dying.

There was a time skip that I can't remember, but it jumps to late afternoon and the mergirl is dead in his arms. Judging by his demeanor, I am very certain it was he who did it, but it might have also been something that was going to happen anyways considering it was a third run. She might have died anyways regardless, but between then and now I have no memory of what happened to her. I can only remember they were playing underwater for a moment right before the time jump.

It is night. The friend that Sin came with was sitting on a rock slab stair outside. The forest started to kill a lot of people once it got dark. The friend looked distraught and Fed up. The uh, friend he came with. The other guy (unnamed) had medium-longer brown hair and a hoody jacket. I am very certain he also had his memory from previous deaths. "This is the third time" clearly came out of his mouth at around 10pm on a starless dark night. The scene is lit by the yellow lighting of the building they started in.

In the building lit by the yellow lights, there were cultists. there was a group of three I remember distinctly as Sin walked into this building, a rather large one decked out in black and white and makeup. I can't quite remember what that cultist said to Sin, but his response to him was rather snide. I remember the cultist muttered to the other two as Sin walked back out of the building and then killed a few people. In the late of night he went to a deck outside that overlooked the ocean. i remember a hanging net off to the side, and I saw him fall over and start heaving until he died through a little bit of laughter. Something I felt that the cultist was waiting for.