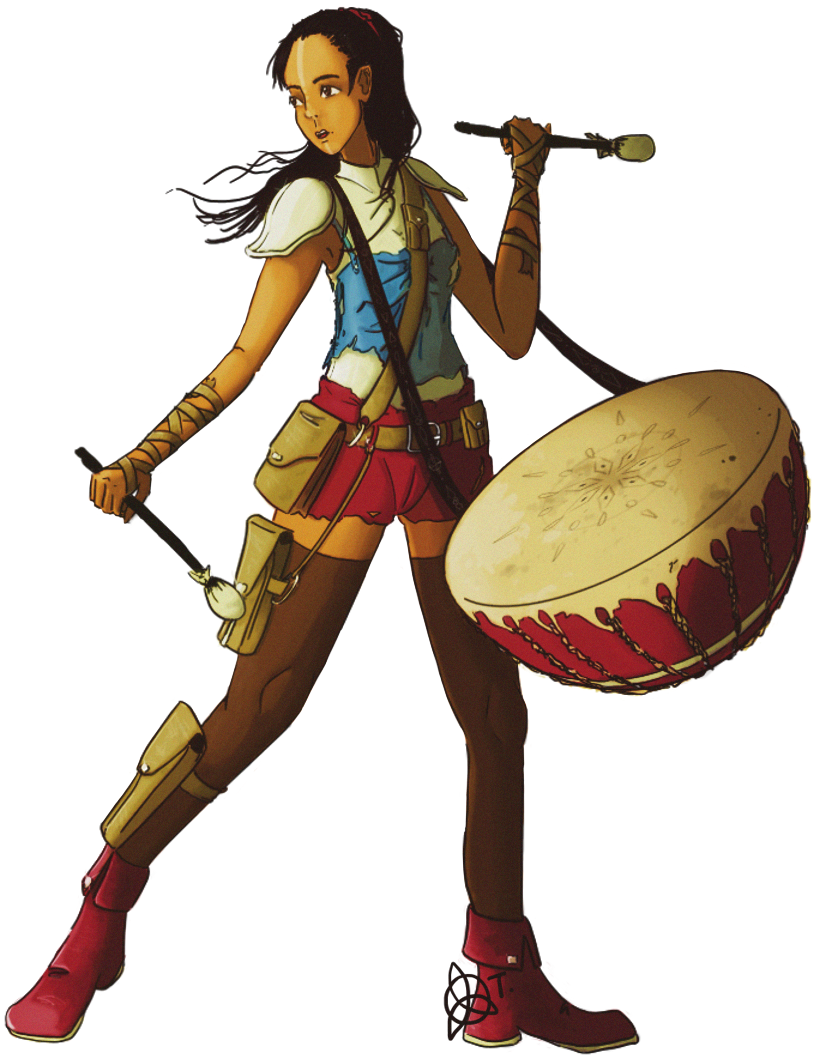 bard whose name I don't yet know

A while ago I drew my fiancé's OC from the days when he was playing Hero Quest with a local guild:

It's been a while since I did character design, and I am instead a DM for D&D sessions that I host for my friends. Since on my server, most of us are musicians, it doesn't surprise me that most of us would like to play bards, even if the option isn't available.

If I were playing a character, I would play a bard for sure -- and specifically, a College of Creation one, because that's the closest to the concept of a Reyvateil from the Ar tonelico series -- a series of games whose music and lore have influenced me greatly to this day.

So I pictured my unnamed bard character with a mighty kettledrum -- and some heavy mallets for that full sound. I feel she doesn't have the strongest sung voice, but it's decent, and she can hold a tune. The drumbeat, on the other hand, is the true song of her soul.

I wanna think of a name for her, but it's not a pressing concern.

EDIT: Without realising, I had subconsciously borrowed from my own ancestral culture. Across several regions of India the nagara (or nagada) is used. It's a kettledrum with much more intricate rope tensioning than what I've drawn here. Some of them are huge, and fittingly sonorous.

No joke. "Bard whose name I don't know" would make an excellent character title.
Right up alongside Man With No Name from the Dollars Series.
Still if you can't think of a name for her, think up several and use them as different titles. For example. Man With No Name, went by a different name in each of the Dollars movies. He was called Joe in A Fistful of Dollars, because he was an average Joe. He was called Manco, which was Spanish for One Hand. Which was the result of a hand injury he sustained in the previous movie. Then he was called Blondie in the Good The Bad and The Ugly.

In her case, you could probably call her something related to her appearance and instrument. Such as "The Drummer in the Red Shorts." Or some variation of that.

Very nice!! I love the idea of a bard carrying a big drum!