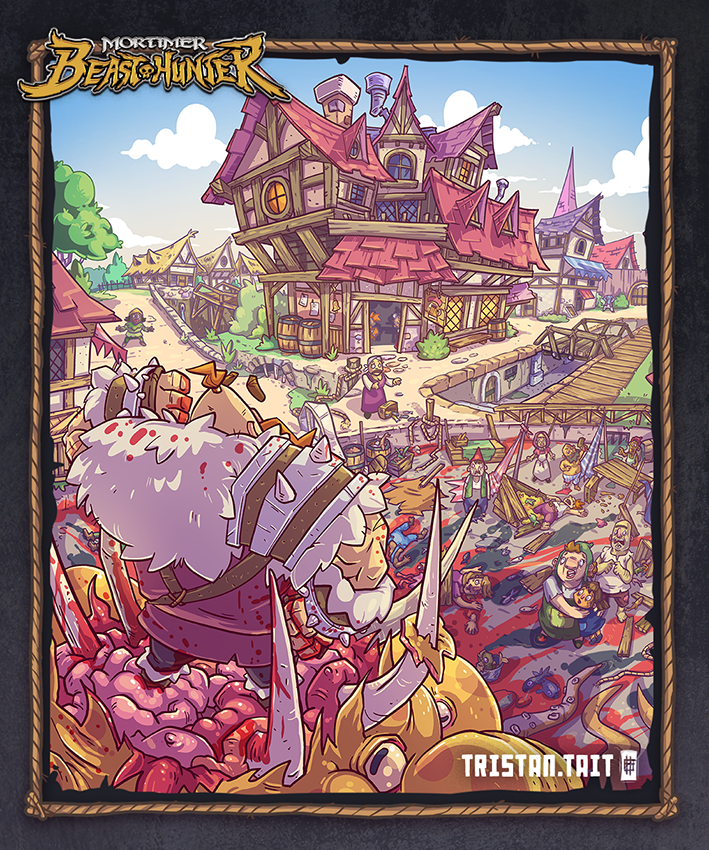 To play along and force directions upon Mortimer, check out my Patreon. It's really up to everyone what happens in this story and I'm looking forward to how whack it's going to become ... I'm literally here to just draw pictures to whatever you guys decide.

If you want to find out how we got to this point in the story, be sure to go check out the previous pages on my instagram, or check the Patreon (Everything is contained nice and neat in the dedicated Discord server you get access to when you join)

“I am Mortimer, Beast Hunter!”

He shouted from atop his mountain of limp tentacles and mashed pulp. Head back and laughing a loud bellowing laugh, he waited for the expectant cheering to die off. Opening his eyes and looking back down at the crowd before him he realised there was no cheering. No jumping up and down, just a small group of villagers all standing awkwardly in pools of blood and ink, surrounded by splinters of wood, dead fish and a few stray limbs. They all stared up at him mostly in shock, scared and unblinking. One of the fish mongers in the back was hopping slowly through the mess looking for his severed leg.

“...who?” a hoarse voiced asked from somewhere amongst the rubble.

“I am Mortimer, Beast Hunter! The Greatest Beast Hunter in all of Varsk!” Throwing back his head once more, he held his fists high still clenching the flesh of the beast had just burst free of.

“What’s Varsk?” another voice piped up.

Shocked and a little confused, he dropped his arms to his sides and took in the people before him.

“You know, Varsk? Here... where we live. This...” He waved a hand, casually flicking blood as he gestured around him, “this is Varsk...the world?”

“I think you must have copped a knock on the skull mister, there’s no place here called that.” A box shaped woman in the front replied. “His voice is funny” sobbed the girl in her arms before being shushed.

“This here’s the Feiland Docks.”

Mortimer slowly raised an eyebrow at the strange woman.

“Yer in Aleborn!” the young girl added between sniffs.

“I think I heard of Varsk once.” The fishmonger in the back called out. “Isn’t it that little island from the stories?” Leaning down he picked up a leg, checking if it was his. “They say it disappeared a few hundred years ago. Turned into a cloud or something.”

Looking around and passed the immediate carnage before him, Mortimer realised nothing seemed familiar at all. It wasn’t right. And how did no one know who he was??

He was Mortimer, Beast Hunter! The greatest beast hunter in all of Varsk! Unless, this really wasn’t Varsk anymore? No, it’s the people who are wrong. More importantly, he just killed that giant Suckerbeist and saved everyone, he was going to get paid!

Backing on to the remains of the smashed up fish market, Mortimer could make out a few stone steps leading up to a dirt road that forked out to either side. In the middle of the fork stood a large building with a wooden sign that swung loosely beside the open doorway. Mortimer wasn’t much for fancy words, but he could make out the picture and it meant only one thing... Happiness! I mean, Ale!

To the left, the road curved off behind the tavern and up to several more buildings, these ones much smaller in size with rough thatched roofing. To the right, the road went down and underneath a small wooden bridge where it twisted out of sight.

At this point you would be given a few options to choose from and the one with the most votes will direct Mortimer where to go. Higher Patron tiers also get access to a breakdown of the scene before the next page is drawn up and from this you can suggest literally anything you want to happen ... search corpses, smack kids, steal gold... literally anything.

https://www.instagram.com/tristan.tait/ - For more art stuff and to catch up on previous pages in the story

This is so neat!

Thanks! You should check out the rest of the story, this might make much more sense then haha

Yes! I already know what happens next because I voted for it! lol