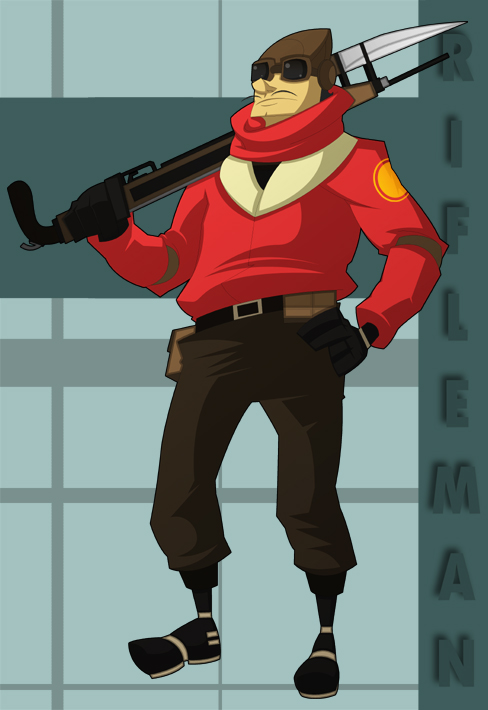 I absolutely LOVE Team Fortress 2. Its perhaps the only fully Online Multiplayer Game I can ever really commit to, and its mostly because of its awesome personality and distinct, lovable style.

But, as with any game, its not perfect. Though, admittedly, most of its problems are small enough where you can just brush them off and go back to enjoying the game. Though, there's always been one big thing about the game that's always bothered me: the Pyro.

I never really cared for the Pyro. He's too easy to play as, and literally ANYTHING he can do, another character can do better. The Heavy, Scout, and Spy are better at ambushing, the Spy is better at causing panic (though as a Spy you shouldn't be trying to do that anyways), Demoman, Heavy, Soldier, and Engineer are better at establishing a frontline and forwarding their teams defense, the Medic is better for extinguishing teammates on fire, and so on. The only thing the Pyro really does better than anyone else is Spy-Check, and even that is something that nearly any other class can do as well.

And so, I created a replacement! I initially drew this just thinking that it would be a really neat character, but I wouldn't mind it replacing the Pyro. But I'm probably alone on that thought.

Anyways, here be his imaginary specs:

Overall it would be an easier, more forward, but less productive/effective alternative to the Sniper's play style. Mostly effective at medium to medium-long range. Not capable of being as effective at the insanely long ranges of the sniper rifle.

Shotgun -
Basically just a standard secondary, mostly for close-range combat, and for deterring the opposition while retreating.

Bayonet -
The Bayonet would actually be attached to his primary (the Rifle), and would be activated by Right-Clicking. But, in order to keep people from abusing its easy use, it would have a slightly slower rate of fire than most of the other melee weapons.

If that's too dumb of an idea then maybe just a Cricket Bat would make for a decent melee weapon for him or something.

Overall
His playstyle/role would basically combine the best aspects that each of the Sniper's primary weapons offer - The singular, precision/elimination role of the Sniper Rifle, and the mobile, forward frontline defense/support aspect of the Huntsman (except you have to actually have decent aim to use the Rifle well enough).

I don't know, I just thought it was kind of neat. I'd love a mobile, precision based class. Like the Scout! Except... not quite as shotgunny, or something...

I guess it comes to play style preference. I love TF2's personality, but I can't play the game. I can never find a class that I like. I think it comes down to being too used to the adaptable play-style that you get in Halo and other shooters, so the class based system of TF2 doesn't work for me.

Back to the artwork, I think he fits in well with the art style, although he looks more French than English to me.

1)That style of rifle (non-automatic, small clip) has been combat obsolete for almost 60 years.
2)A precision, non-scoped weapon at moderate range with 6 rounds would be the Ambassador.
3)British=English, and the accent is highly similar to Australian.
4)No weapon of reasonable medium range has ever had a pistol grip without a shoulder stock.
5)The sniper is as mobile as this character is intended to be, you just can't run around scoped.
6)Pyro and demoman are the two least appreciated classes in the game. They require the most skill to be truly good at, which would explain why you haven't been enthralled by pyros yet. Give it time, play with some better opponents. Almost every server I've been in has a pyro in 1st or 2nd in points.

You could probably propose a rifle weapon design for the soldier that did a health for speed tradeoff that would cover all the aspects of this class, and with the amount of new drops being included, valve might give it some thought.

Its Hard To Say..

Pyro is Quite annoying but he is the Anti-Balance.

The Pyro is the class that is capble to even the score no mater what is the opponent.
Without him the strongest team will win, meaning We needed to have skills to win.. We dont want that do we.. -_-''
The class for Pyro must remain or the game wnt have the on foot defense meaning all defense are sitting ducks.