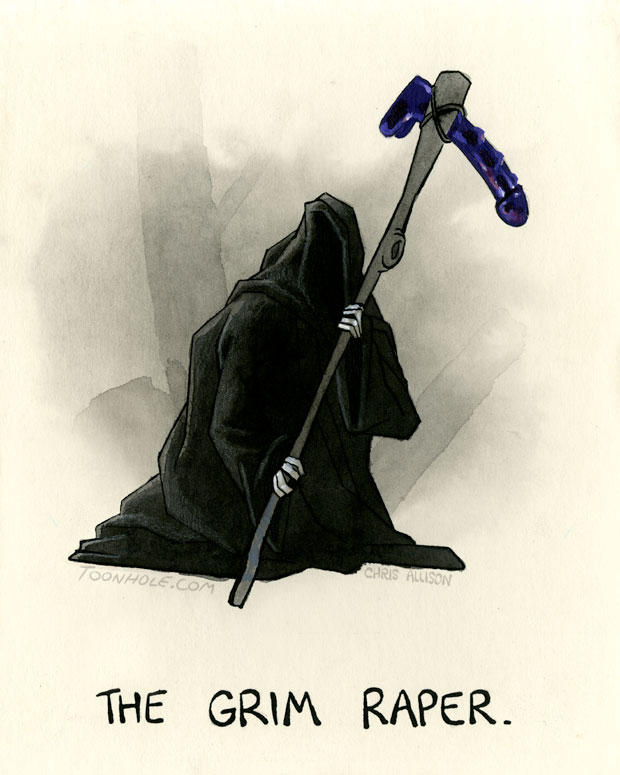 Don't fear the reaper. Fear this guy instead.

Other stuff to be scared of over at www.toonhole.com

Funny in an off color way :)

Just make sure to eat your vegetables.

"Ohhh, some people don't like you to talk like that. Ohh, some people like to shut you up for saying those things. You know that. Lots of people. Lots of groups in this country want to tell you how to talk. Tell you what you can't talk about. Well, sometimes they'll say, well you can talk about something but you can't joke about it. Say you can't joke about something because it's not funny. Comedians run into that shit all the time. Like rape. They'll say, 'you can't joke about rape. Rape's not funny.' I say, 'Fuck you, I think it's hilarious. How do you like that?' I can prove to you that rape is funny. Picture Porky Pig raping Elmer Fudd."

This is such a good quote. Thanks, I'm gonna send it to people who've been sending us hate mail for this : )

An amusing piece. The colouring on the cape (or whatever it is called) gives it a great texture and the shading is highly successful in bringing the image of the page.

My criticisms would be that you should see even the smallest bit of wrist on his right hand and the lower end of the staff seems to be coloured a bit poorly compared to the rest of the picture. These are minor issues though and over all it's very good.