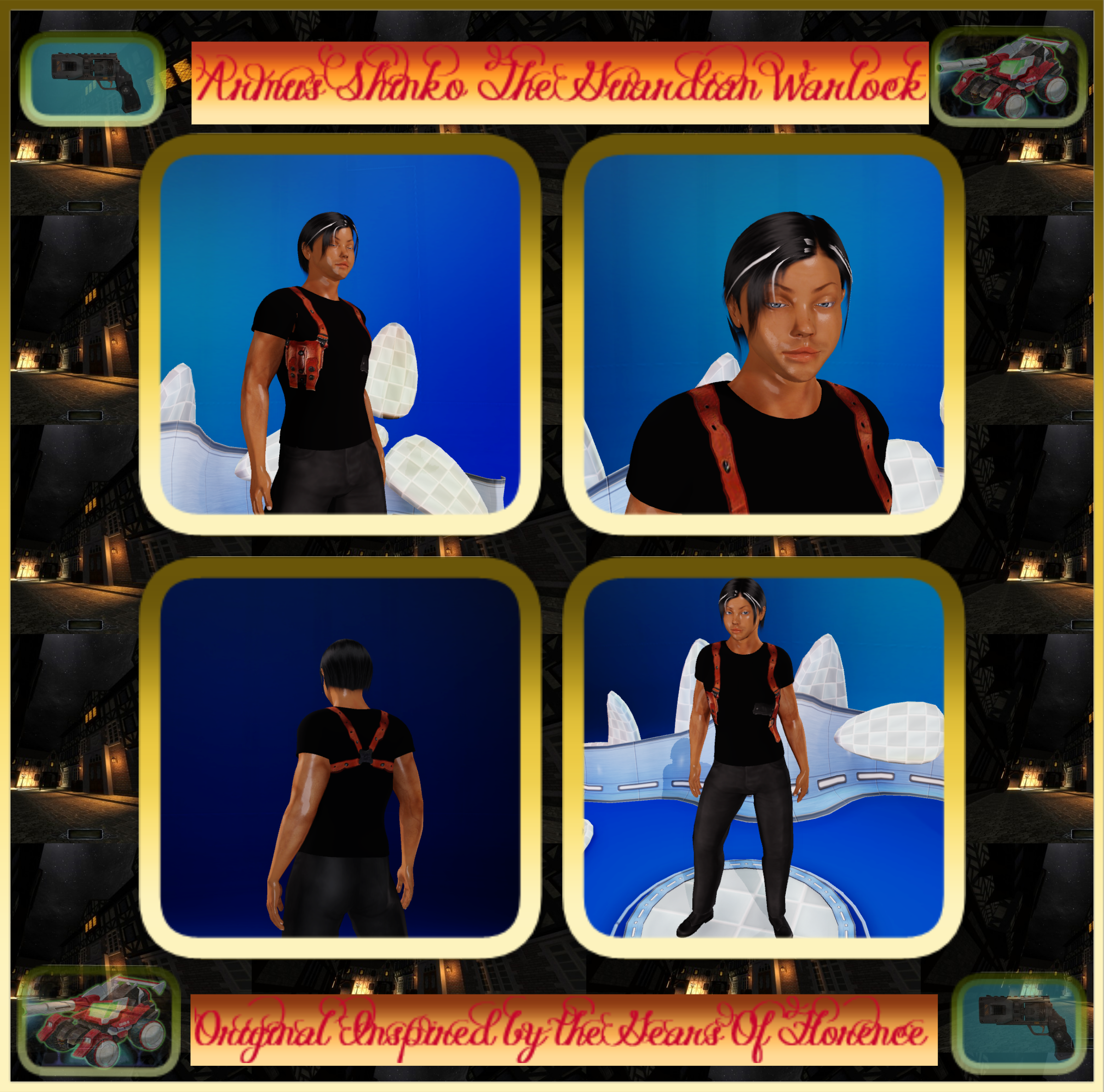 Born to The Family of Shinko Or the Order of Faith

Fit and Athletic he weighs 192 lbs

he has black hair with white streaks

His Father granted him the blessing of Reverse Gear an attack that can turn back any enemy Attack be it physical or magical.

he bears a special Gauntlet he forged himself called the Ravens Blessing named so for its power to increase Intelligence and chakra flow But is also masks his Aura from predatory enemies .

holds Mastery over Machine and Mechanical repair his motto

"If it has an Engine Gears and Oil I can Fix it!!"

He is the Only Warlock that can fully utilize Chakra Energy over a wide Spectrum though young he wields his power with care.

In combat Only the Alchemist Mage RedThorn can match his speed and ferocity.

this occurred in when he was in the City of Folia he was there picking up parts for a very special Vehicle The City came under War Witch attack he of course fought them back but tried not to kill any of them as a Guardian Warlock he would strive to spare the lives of any enemies and avoid Blood shed.

"On your Feet Breeder stud our Queen wants a word with you.."

He bowed his head and followed but at that moment of being chained and treated like an animal his face became devoid of emotion and His heart began to pound hard as he was thrown at the Queen of this War Witch tribes feet Her Name Kira In'yoku as he was knelt he looked up at her with Defiance his teeth gritted she was Beautiful but her eyes spoke of nothing But Lust and Evil she spoke down to him as if he was nothing...

"Well look at this a perfect Breeder who would have thought we would find a Warlock in this filthy man ridden city tell me you Name not that it will matter as you serve me as my Prized Pet."

Now he was Emotionless his heart felt empty.. for centuries he knew of these women but had never encountered them seeing how he was being treated his eyes turned Black as he began to Chant the Queen smiled as he Did and spoke..."oh how adorable you think your Mana will free you from your chains? no such luck

stop you struggling and just be my willing Stud I promise you nights of Pleasure your Body has never felt Once I have touched you no other woman will do."

He continued his chant

"By Strength of will

by power of Mind

with all my heart,hope,faith and Love

I call you now the Dark Raven Above

Break My chains and all that Bind

with that his Body Glowed and the Chains That held him Broke an fell off he stood up Before the Kira and spoke..

The Queen Spoke her voice filled with fear and what seemed like almost excitement ..."What Manner of Man are you you Broke my anti Mana chains h..how...?? Tell me How...for now I know I must have you!!"

Armus only uttered one Phrase before casting another Incantation

Drain their Power and and Make them Kneel

do not falter do not kill

Light And Faith By Hearts Rift

With Mercy and Love let

She spoke as if even More excited by this turn of events she spoke Now as If pleading..

"You Defeated us But you spare our Lives? what do you intend to do to us now that you have us at your mercy"

He stared at the Queen her gaze was now changed to one of Longing instead of defiance Knowing he could not let them run free he chanted one last time....

"By Ravens wings and blessings Light

Kira was still knelt shedding tears...Never in her 400 years had she seen a man spare her kinds Life let alone a Queen War Witches' life

One of her Guards ran to her and asked if she was Hurt because she was in tears she could only say this...

In the 2000 year History of the War Witch Tribe none had ever felt love for any man...

But that all changed and it what worse the 15 Guards had also fallen under the warlocks spell though he himself did not intend for this to happen. And he was also oblivious of it...

As for Armus he returned to his Home His Heart and soul bearing the scars of being treated like an animal in cage..

From that point he was wary of any and all women

But he Could Not Avoid Victoria for she was after all his employer so they did speak and over time they grew close but he was still wary of women But little at time he began to trust Victoria and Victoria well she was already very much in Love with the Warlock but once the work was done he moved on leaving her only a note and the now coveted Platinum and Onyx Ring..

a year later however they were re united during The War Witch Incident it was then they realized they were meant for one another thus far this is the Tale of the Guardian Warlock...and what became of The Love Lorn Amazon War Witch Queen she once again set out with her Guard but not to attack others But to Find the One That stole her Heart and her honor guards hearts

What Lies Beyond The Cross Rip?

Only Time will tell

Nikki Rexx and The RavenCroft Name belong to  Fluffernubber