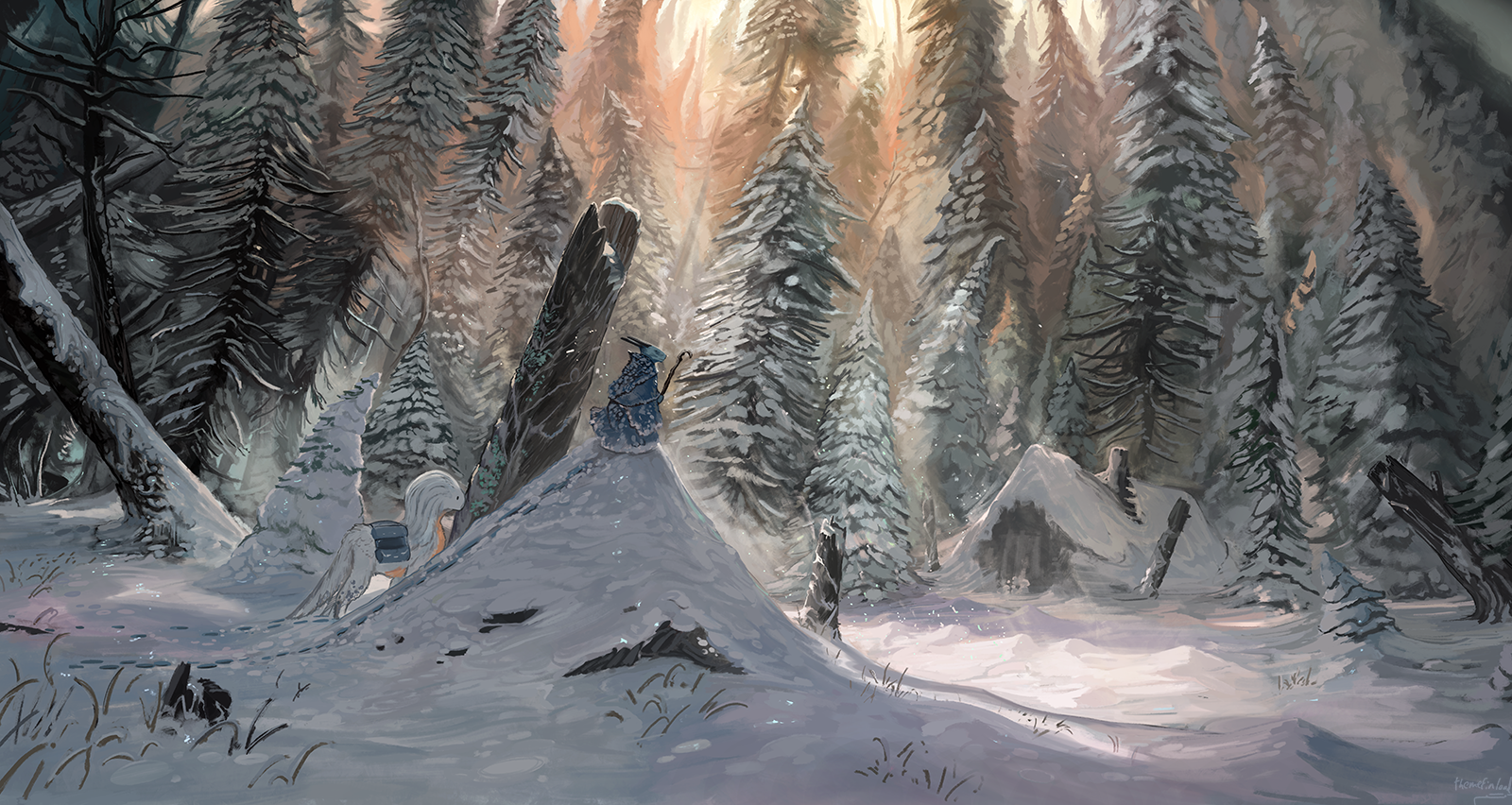 "Something handmade juts out of the snowy landscape. It almost passes by without notice, but the triangular snow coated shape reveals itself from beneath the looming pines, a cabin, one in terrible shape. Just looking at it from this distance I can tell that nobody has been to this poor home in awhile, with the huge piles of snow coating its roof and entrance. At a second glance, I notice the collapsed roof, it is impossible to tell if the roof collapsed before or after it was abandoned. The air in the forest is almost eerily still as snowflakes glimmer in the dimming evening light, the trees popping and cracking under their heavy load as a small gust of wind breaks through.

I can't help my curiosity and have to take a closer look at the cabin, wading through the snow, Pluf, who had been standing still and staring at the cabin all this time, follows as he notices me begin waddling towards the building. Holy symbols of Ukko adorned the door. I knocked on it and I felt a bit silly doing so as surely this home had not seen people in awhile. No answer so I tried opening the door, with great effort I was able to open it, I heard something clatter and fall around the room as I pushed the door ajar.

The whole cabin was pitch black, as I touched the wall beside the now open door I found that the walls were covered in a thick layer of soot, perhaps from years and years of smoke. The only thing I could see inside the cabin was the small area beside the soot covered fireplace which was illuminated by the pillar of light coming through the collapsed ceiling. The pile of snow which had gathered there tried to illuminate the room further, but the black walls sucked up all light that touched them. Something in this room smelled off putting and not being able to see the extremities of this room made it all the more unnerving. At the far back of the room I could very faintly see the outline of a doorway to what likely was the middle-cellar, a common room in most cabins that is halfway submerged underground. From this doorway I suddenly heard a faint voice.

" Please, come closer.", it said in a silent and hushed tone. I was caught off guard by the voice coming from the darkness.

"I am sorry, I didn't know someone lived here still, who can I thank for permitting me enter their home?", I responded, with a slight stutter to my speech.

- May I light my lantern inside your home, I can't quite see where you are.

I lit my lantern and raised my hand towards the sound. A face appeared from the darkness, gaunt and pale. I stepped towards the figure to have a closer look. They were old, ancient even, their horns had grown so large that they seemed disproportionate to their head, their scales had become hard and sharp. But I could still tell that they were likely a northern dragonoid. Their robes were covered in soot, I thought I could also see moss growing on their chair and clothes. They were sitting on a chair, and must have been sitting on this very chair for, I cannot even tell for how long, but it must have been years, everything in the cabin seemed untouched for ages.

- I haven't had visitors in what feels like...I cannot tell, I only know the passage of time now by the light I see from that hole, which appeared there.... someday. Before that I have been sitting here in the darkness, waiting to petrify, for my scales to harden and the day when I cannot even talk or breathe anymore. I suppose I could say that I am glad I did not build my home so well, otherwise I would have had to sit here in the darkness forever, khehheh.

I listened silently and waited for the old dragonoid to continue as he let out a dry cackle and a wheeze.

- I am traveling south with my royal plains strider who is outside. I have a message to deliver to the capitol of the southern cousins.

The old dragonoid wheezed as he prepared to talk.

- The south?... Must be an important message if you are willing to go there, crossing the dragons teeth, with a strider no less, don't think you'd be so cruel to take it up there, child.

- I wont, I was told of someone who could take care of him on this side of the teeth. The message I have isn't really why I am here, I am an exile, a lastborn.

-Aaah, a lastborn...That explains it...I am one too, exiled from my community, and here I am. How cruel our peers are, to send us to die...

- My mother did not send me to die.

- Why did she send you away then? Would a loving, caring mother do such a thing?

- I am doing this because it was my wish and it is tradition, Saleua teached me for years for this.

I could hear the old dragonoid cackle at my response and then suddenly stop. After a brief period of silence he began.

- Saleua?...You are her child? The child of the murderer of my kin?

In the darkness I could see the figure begin to shudder and move. snaps and cracks filled the dead silent room as it started to become more and more alive. In the lantern light I could barely see what was happening, but something under the robes was moving, and from the way the robes moved and undulated, this thing was not what it seemed. I began to make for the door immediately as it dawned upon me that what I was talking to was not a lonely harmless dragonoid elder, but something that had come from Glacialisa.

Something cold latched onto my leg, the sudden pull of it tipping me off of my feet, knocking the air out of me. I was being pulled into the darkness into the half-cellar, towards the figure, who was by now almost standing upright. My lantern fell from my hand and smashed against the floor, the fire went out in an instant, I couldn't see my lower body in the darkness anymore as I was being pulled. I quickly scampered for the knife on my hip, unsheathing it and plunging it into the thing that was pulling me. Something shrieked in the darkness as it let go of my leg. I half crawled and sprinted for the door and surged out into the snow, not bothering with the door, I ran. I yelled for Pluf who thank Ukko came into view as I called for him, with him behind me, I kept on running until I felt like I was not being chased anymore and was out of the thickets.

Your painting is fucking stunning and the story in its description makes it even better *chef's kiss* It's simply delicious.

"Hmm, felled trees, snow everywhere... There better not be a god of war with a boy in this cabin."