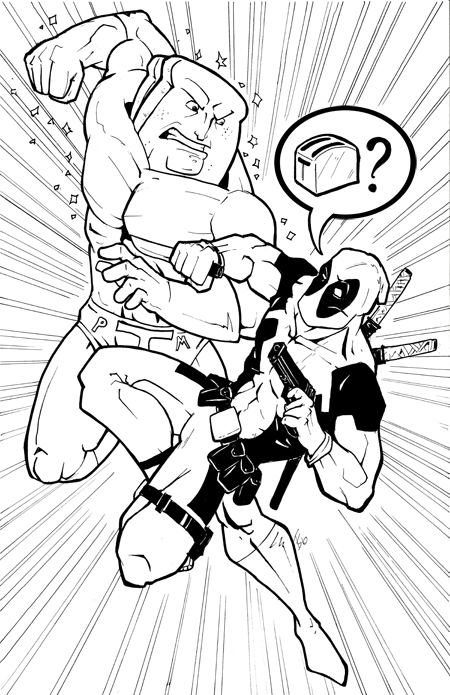 Acutally going to be a print for Steel City Con in Pittsburgh. I'll have prints available if you're interested. Email or pm me if you'd like.

-edit- Frontpaged! Crazy! Thanks a bunch!

Dude, that looks exactly like Deadpool does in the comics! It seems just like what official artwork would churn out! Powdered Toast Man looks a little updated for a more modern comic book appearance, which is great. I guess he's not really a meta guy like Deadpool, but both are at least involved in wacky adventures. Of course, Deadpool would be one who would engage in activity with any crazy character. A bit nonsensical, but still great.

The background is also good, because it fits the stereotypical action comic book. I would love to see this developed into an actual comic book. I love how confused Deadpool looks. The lines and body movements are really well done and emphasize the parts well. I've been saying John K. is a big art influence to many people, but I think this is the first actual fanart featuring one of his characters.

yeah !! if you give this men a grape jam he came to be more stronger
hahahahahaha !!!
cool art

Blast from my childhood!

Powdered Toastman?! You're kidding me! [; I love when people make things that just bring back the past. It's nice to reminisce. And also made very funny Ren & Stimpy episodes. And Deadpool is just a badass. Looking forward to his movie! I go to school for digital video production and such and one of my friends has the script for it. Excitement to the power of ten? I believe so.
And I cannot pick anything apart in this drawing. It was drawn very well. And although there is a color version, I like this black and white version. It's like a comic book. 10/10 5/5

is the best drawing ever.

*Deadpool runs in and cuts off my arm*

"Cool, maybe this will come in handy for a stupid plot device in my movie."

What the Hell? We didn't even fight yet!