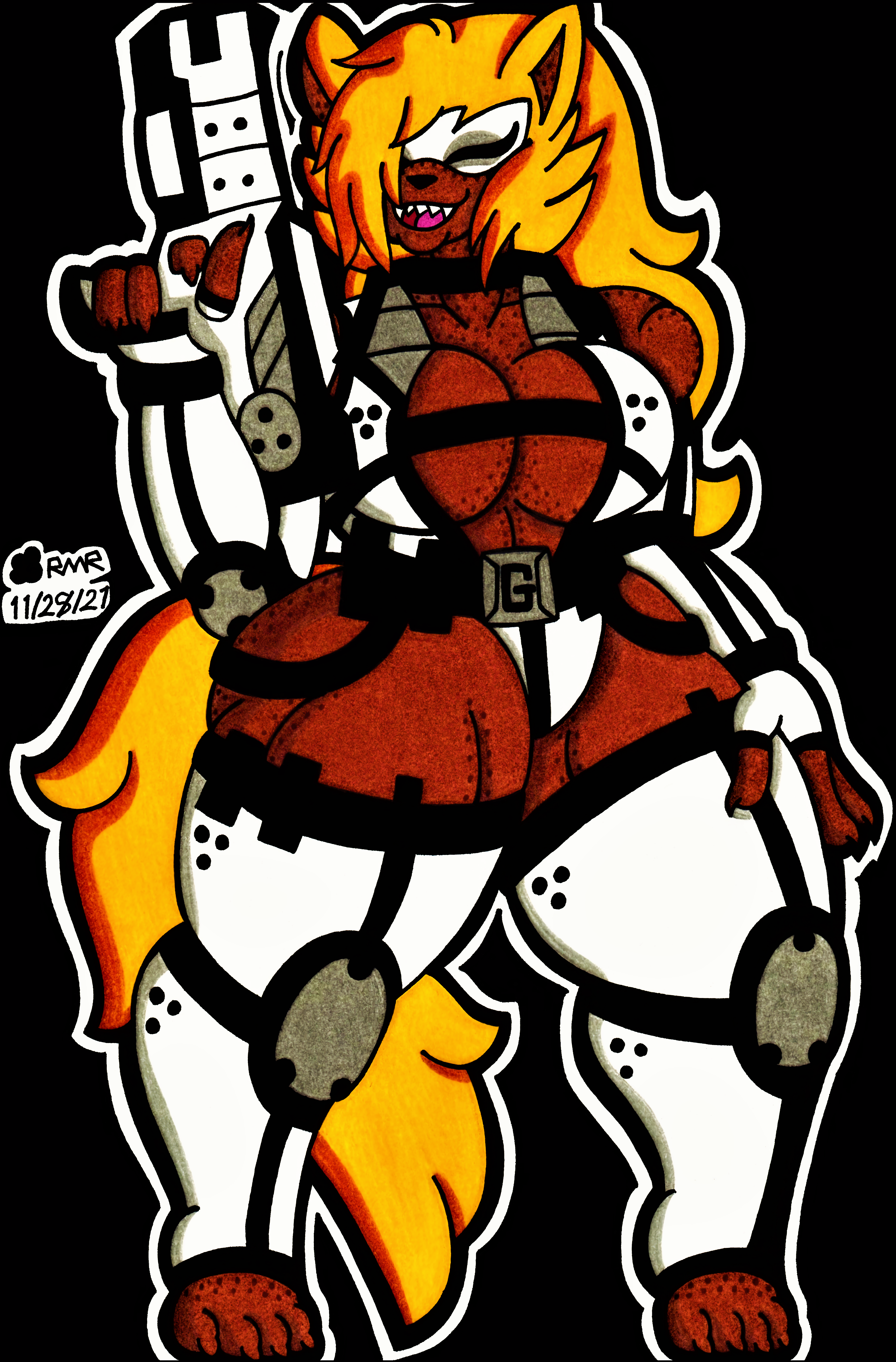 Whisper: The White Angel of Death

So, I've been playing catch up in the Sonic IDW comics recently (I read from Issue #36 to Imposter Syndrome #1) and those comics just keep getting better and better.

Whisper did show back up, if be it very briefly, but it was nice to see her again after what happened in the Metal Virus Saga.

Since I got put back into a Sonic mood, I wanted to revisit my Sonic AU of the Anti-Eggman Unit.

Whisper was the first one I drew for the AU, so it was only fitting for me to revisit her with better materials and a slightly better grip of anatomy.

If her last outfit was based off of Sniper Wolf from Metal Gear Solid 1, then I figured that this time I'd try for the sexy white Sneaking Suit The Boss wore in MGS3 Snake Eater.

The brights of the aqua green last time didn't look as good to me, but this white suit...

GOD, it looks so fucking good, especially against the black straps and her dark skin.

I'm trying my hardest not to simp for Whisper, but damn, do I love the way I drew Whisper this time.

I had to shorten Whisper's rifle just a little for the sake of ease, but it looks good enough to me, kinda close to a more modern compact rifle.

And I'm happy I decided to do a 2nd attempt on this one, because the proportions look much better than my first time.

Here is hoping she has more moments in the upcoming arcs of the IDW comics.

It’s been roughly 6 years since Tangle and I have joined G.U.N. and so much has happened.

We both were trained by Elite Agents Shadow and Rouge, we met the 6th member of the AEU; Yvette the Shark.

And Tangle, well, let’s just say she had bought me a very spectacular ring recently.

It’s those lovely moments with Tangle and being with my team that makes our jobs a little easier.

As me and Tangle have gone out on mission after mission, we have gained more knowledge and experiences with how Eggman thinks; far more than we would have of on our own outside G.U.N.

But, there was one nagging thought in the back of my head I couldn’t shake.

Bioengineering is a more commonplace idea of warfare that’s been looming around with G.U.N. and the Eggman Empire.

More specifically, finding a way to harness Chaos Energy, similarly to what Gerald Robotnik did with Shadow almost 70 years ago.

With some intel Rouge had collected from Eggnet, we figured out that Eggman has a Mobian protégé of his own named Dr. Starline the Platypus.

He was put in charge of the B.O.W. division, and for the longest time that was the last we heard of him and Eggman for a little while.

We all have gotten use to Eggman hiding like the coward he is, striking back when people had forgotten about him.

Shadow wasn’t going to let that happen, and he was able to pinpoint a base of operations on Westside Island.

The entirety of the Anti-Eggman Unit shipped out to stop the plan Eggman and Starline were trying to accomplish.

Things were going smoothly, Shadow and Omega drew the aggro on themselves, and Rouge quietly snuck into the base in the middle of a firefight.

Yvette found an opening underneath the island itself, and me and Tangle snuck on ahead; picking off any badniks we saw.

Tangle found Rouge up ahead and the 3 of us continued to walk through the inside carefully until a masked jackal Mobian warped in front of us.

I’m… Not very sure what happened after that…

You see, the jackal, who we were informed his name was Null, used some strange chaos powered ruby.

He was casting illusions that greatly disorientated the 3 of us.

Null didn’t even fight us, no, it was the other 2 creations that battered us up.

A Tenrec named Surge, and a Fennec fox named Kitsunami.

Surge lived up to her name and was powered with high voltage electricity; while Kit had hydrokinesis powers, but could only control the water stored in his backpack.

All I could feel was getting a punch in the gut with what felt like a cattle prod.

I managed to get off one well-placed shot, and got Null’s right eye.

I had some small electrical burns and a broken arm, Tangle had a broken leg and was getting water pumped out of her lungs thanks to Yvette.

And Rouge managed to get the worst of it…

I don’t want to go into detail, but she held out long enough for Shadow, Omega, and Yvette to fight off the others.

Shadow was near her bed when I woke up, I could tell he was shaking in fear for our well-being.

He was doing his very best to keep his composure while tending to Rouge.

Commander Stone would meet with the 3 of us later, laying down some rather top secret information.

He told us that G.U.N. had been working on a Super Soldier serum for a very long time; apparently since Shadow landed on Prison Island 70 years ago.

There were varying effects throughout the years, but only until recently, they had perfected the formula.

Only of the few candidates they had in mind, Tangle, Rouge and I were being considered for a while, but only held back due to needing more testing.

But, considering that half of G.U.N.’s best special ops unit is recovering while Eggman is making bioweapons, they figured now would be a good moment to present this opportunity.

Despite that fact, Stone didn’t want to force this upon us.

Before I could say something, Rouge barely was able to squeak out a “give it to me” as loud as she could.

Tangle was hesitant and so was I, but, with how Rouge almost got herself killed protecting us, I know we had to repay that favor.

We all took the serum that night.

What would have taking roughly 8 months of recovery, we were back to normal within 3 days.

The change we went through was kind of exciting if I’m to be completely honest.

I broke every record I had set in the danger room, and this new sense of speed I had was unreal.

Not to mention my strength, I hit a Mimic Bot so hard that I caved its metallic skull in without really having to try.

I also felt my vision increase vastly too, I didn’t even really need to use the scope on my sniper, I just knew when to aim as if by reflexive instinct.

It didn’t take long for RnD to create some new outfits and weapons to use.

My outfit in general was designed to have new tech they called “Octocloaking”.

Which, with the help of nanobots included with a booster shot of the Super Soldier serum, lets my entire body camouflage itself.

I got to do some test missions with this, and it was frightening to me at first…

So this is how Mimic carried out his missions, it made his jobs so much easier.

Now I can see why he was so efficient, and how he was so ruthless.

The fact this outfit didn’t come with boots was confusing to me.

I asked about this, and I was told “I didn’t need them thanks to being a wolf”.

Perhaps this is that “beastly instinct” training Yvette has been talking about making itself known to me for the first time.

Because when I did put on some boots, I somehow performed worse with them on oppose to without.

My new rifle was dubbed “The White Angel”, it’s light as a feather, compact, and has all of my previous rifles’ functionality.

I mainly keep it in single fire or burst fire mode, as the shots are so insanely powerful that anything more would seem like overkill.

Over the course of 3 months in training, I’ve gotten stronger, and I need to use my skills to protect my team.

I can’t have what happened to us become a repeating offense.

I’m going to hunt you down Eggman, it’s only a matter of time, you won’t take my team away from me a second time.