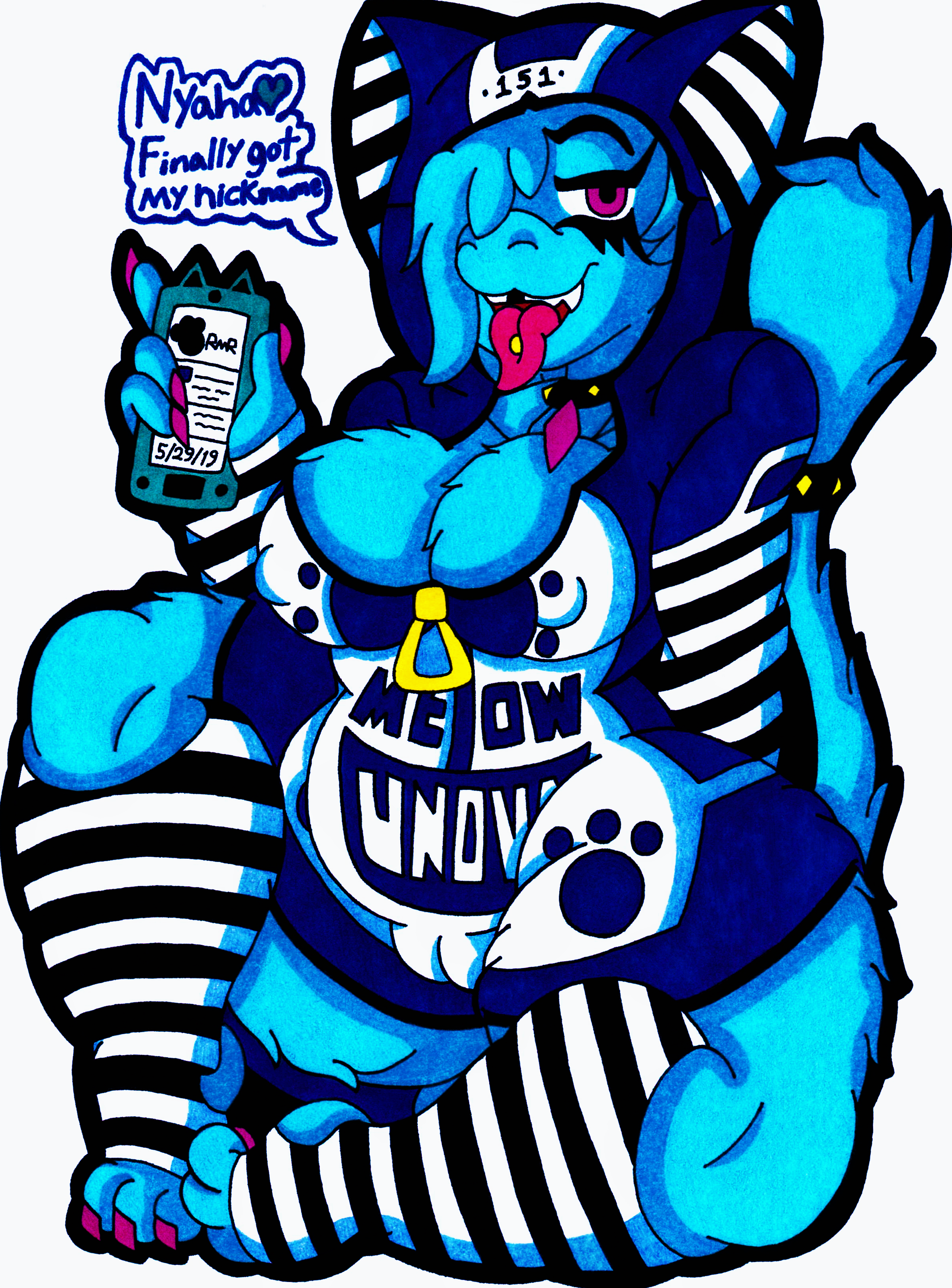 Didn't plan on drawing her again so soon, but people rather seemed to like her.

I gave the main reasons of drawing Azula again is to put her into a cute hoodie, and to fix the wonky anatomy from the 1st picture.

Yes, her rather tiny legs were bothering me, so I beefed them up a bit and made Azula's head just a bit smaller than before.

I also made Azula's fur a bit more pronounced, giving her a more fuzzy look.

I told myself that I wouldn't draw hoodies and stripes as much as I use to when I was younger, but goddammit these clothes just turned out so well for Azula!

Honestly I like this a lot better than her Android 18 cosplay clothes she debuted in.

Maybe I'll make this her more "default" clothing design as this cute and sexy hoodie fits Azula much more.

Looks like the day finally came, I got my battle nickname!

I should probably explain, ever since I moved to Unova roughly 3 years ago I noticed something about the more well-known Pokemon Battlers.

People like Willard Family all have these fan given nicknames; The Crownless Queen for Tenka, The Green Devil for Tetsuo, and so on.

It's almost like a "rite of passage" to the Unovans if you are given a "Battle Nickname", hell, even my dear friend Alice Mishima goes by "Mad Malice" on stage or in the ring.

I'd been making pretty good progress in the Battle Subway with Alice via tag team and solo runs, but I think the one thing that made Unova notice me as a fighters and less of "The one Shiny Mew girl" was in Nimbasa City.

In Nimbasa, every two months they hold a "secret tournament" called The Carnival of Chaos, where they hold special events that wouldn't be allowed in normal tourneys.

I ended up in the finals and fought the reigning champion, a Darkrai girl named Nora.

She was terrifying to fight honestly, I can fully admit that right now; tossing Shadow Balls like it was nobody's business.

I managed to by focusing on Fighting Type move sets and making sure to play hit-and-run tactics.

Maybe it was a lame way to win but I'd rather not get slashed in the face with Shadow Claw again...

Not to mention I had to pay Nora back for beating Alice with some rather cheap tricks in the semi-finals.

I got the Carnival Crown with a roaring crowd cheering my name.

Eventually the announcer named me "The Punk Psycker" and that name just kinda stuck to me.

So that how I got my nickname!

As for the outfit, I'm wearing, this kinda became my "Battle Outfit" since I beat Nora in it.

Not that I mind, this hoodie is very comfy, and no, I don't have wardrobe malfunctions.

Static Cling from my fur to my clothing, Alice thought me how to do that, and it works so much better than double-sided tape.

wow
Your drawing style is very ...
I don´t know how to describe it
i just...
I love it.

Thanks, I'm glad you like they way it looks.