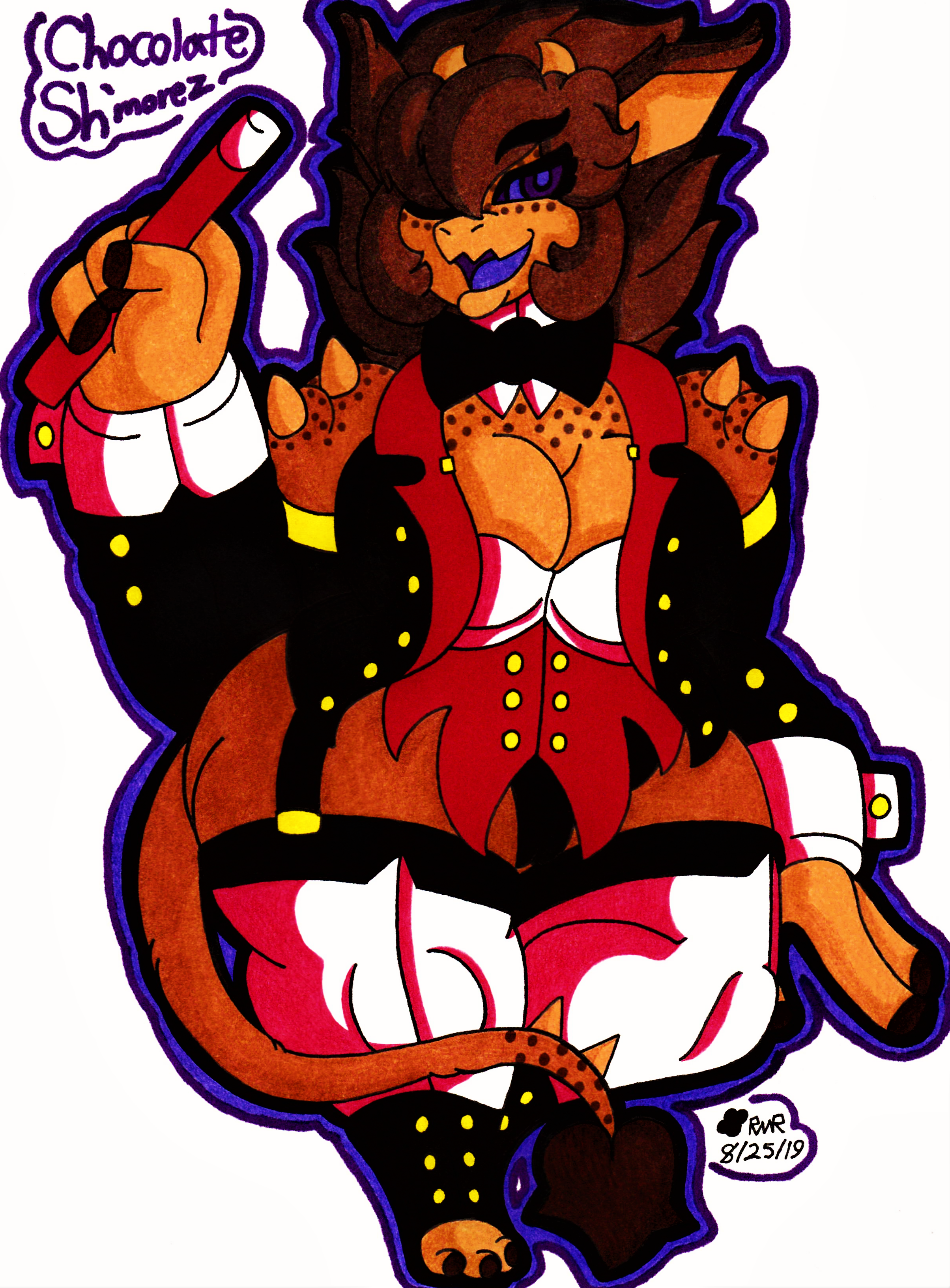 The Imp with Amethyst Eyes

What sight for sore eyes!

How long has it been since I last drew Chocolate Sh'morez?

Well, let's give my favorite Sweet Imp the spotlight for a change as I think it'd be a nice time to bring her back.

I thought that I was going to redesign Chocolate be shockingly I didn't, her design just became more refined.

The only "change" I suppose would be that Chocolate's hair is a bit shorter and not as long in the back.

As for Chocolate's outfit... Well, she never had a solid outfit that she'd always wear, but this is what I wanted that to change.

2 years ago I drew a picture of Chocolate in a magician like outfit, which was later colored in by my friend Damian Vertigo.

I really liked the way that picture looked too as I felt those type of clothing really fit for Chocolate's personality.

So I ran with the idea and turned her into a "Magical Magician Girl" because I don't think I have one of those characters in my loadout.

Overall, I'm very happy that Chocolate turned out as great as she did, I think I have forgotten how much I had missed drawing her in general.

Sometimes it nice to draw a character with more exaggerated body type.

Age: Has forgotten... (Real age unknown, but she acts rather childish at times.)

Weight: Chocolate says she is only 120 pounds, but with the amount of sweets she eats, that could be lie.

Species: Chocolate is what calls, a "Sweet Imp" but she can just be called a simple Imp.

Occupation: (Self Proclaimed) Madame of Sweets or better know as The Thief of Sweets.

Weapons: Chocolate has many magical powers.

Thanks to the Amethyst Eyes she stole for herself Chocolate's latent awakened powers allowed her to rip open portals and allows her to jump into other dimensions and plains of existence.

Chocolate can also fight with said portals but popping up anywhere on the battlefield as well as throw foes directly into said portals.

Chocolate's wand, while nothing special can be transformed and shapeshift into other weapons.

This can be handy if Chocolate doesn't want to use her magic at that point in time.

One of her favorite side spells allows her to turn living beings and inanimate objects, into sweets.

But she doesn't use it often and it only works on very weak-minded beings, and small objects.

Chocolate Sh'morez was born as the 2nd child to the Sh'morez Empire in her home dimension.

While growing up it was quickly shown that Chocolate wasn't as naturally talented as her older sister Vanilla was.

Embarrassed by their daughter's lack of skill, Chocolate was banished to live with her Aunty Shortcake as the King and Queen hoped that this event would just blow over.

Growing up in the poorer side of the Sh'morez Empire, life was a bit of a struggle for Chocolate going from riches to rags.

To get by Chocolate helped her Aunty Shortcake ran a local bakery.

This wasn't enough for most cases, so Chocolate had joined up a group of thieves to gain some extra cash.

Sick of this lot in life at the age of 18 Chocolate planned a grand heist, she'd steal the Amethyst Eyes from the very family that had forsaken her.

Chocolate and her team where able to get in and take the eyes, but something odd happened.

The Amethyst Eyes fused into Chocolate's skull and replaced her old eyes for new eyes.

Chocolate's latent powers awakened, and she transformed into a mighty and power demon.

With her new-found power Chocolate decided to let out her most impish dreams and transformed Castle Sh'morez into a living hell of never ending pranks.

With her family and all the castle attendants stuck there, Chocolate was finally free to do whatever she wished; and with her powers, she'd travel the dimensions learning new magical spells and rediscovering her family lineage.

Almaz's gave Chocolate a place to live and to be safe, in exchange for Chocolate using her dimensional powers for transporting Infernal Troops to mess with the forces of Paradiso, and conquer the other realms.

Chocolate doesn't seem to mind this at all, it was more than willing to help out.

As a token of thanks to Almaz, Chocolate often fills her castle with as many sweets as Almaz could want, free of charge, and for the rest of the demons in the Inferno, she makes money hand over fist.

She is often found lazing about just floating around with her powers, eating sweets and messing with the local royal guards.

Seeing how Chocolate was denied a childhood thanks to her parents, once gaining her new powers any sense of responsibility went out the window as she could basically do anything she'd want.

She got to truly enjoy life for the first time in a very long time and lived every new dimension hop as a new adventure.

This also invited Chocolate's more impish nature to come creeping in as she got to play as many pranks as she'd wish to whoever she ran.

While said pranks where never life threatening or malicious it annoyed Chocolate's victims, but assumed her greatly.

Eventually Chocolate would slightly mature as she'd study new types of magic and dimension hop to find locations that the Sh'morez Empire visited and stole many artifacts.

Besides her pranks Chocolate is rather friends and would much rather make friends then enemies.