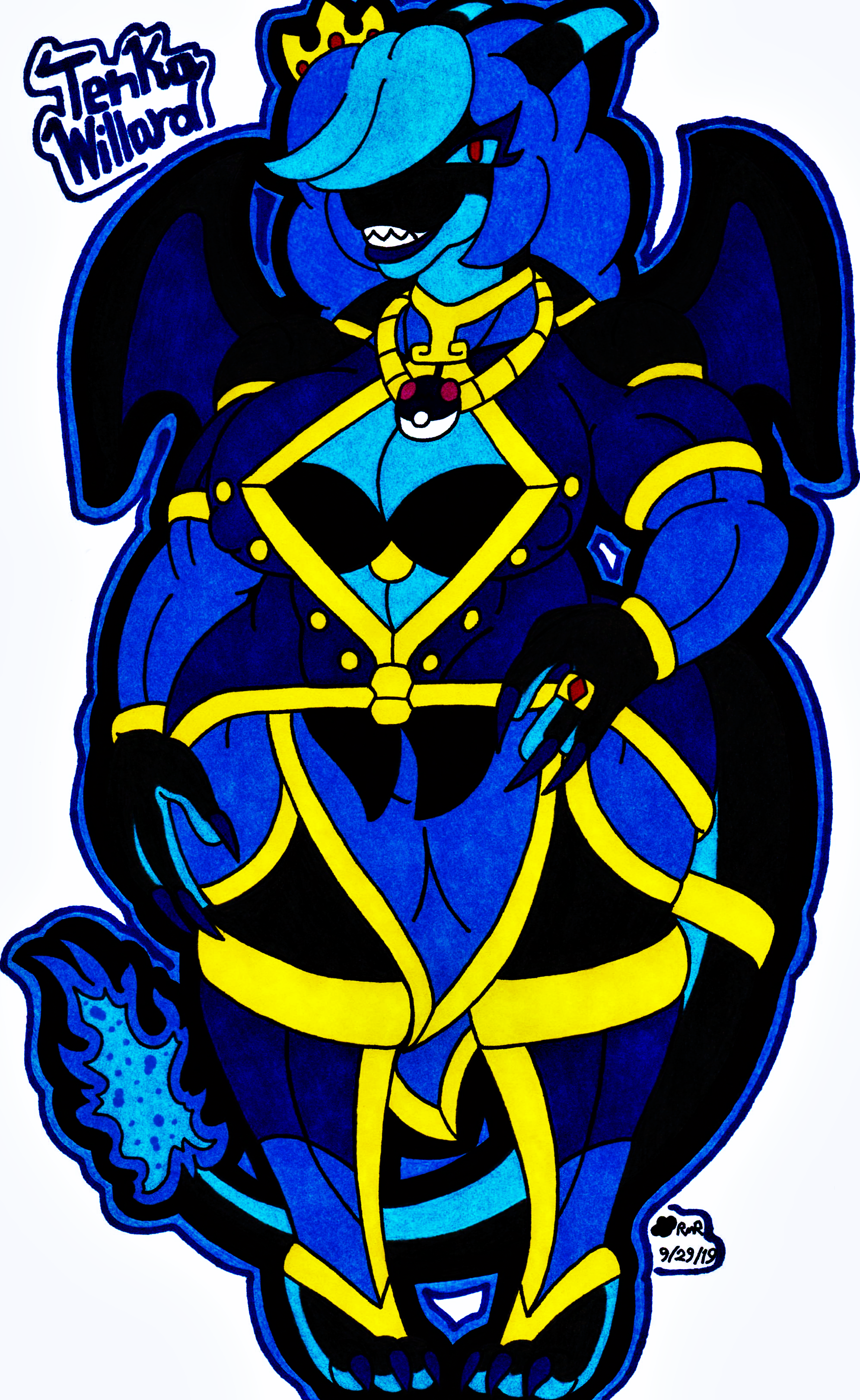 Well, I seem to be on a Pokemon high as of recently, so I guess it'll be good to ride this wave out until it passes.

So after 2 years of neglect, her is the fan favorite, my lovely Charizard lady; Tenka Willard.

As yes, The Crownless Queen is back with a newer redesign.

However, this redesign isn't a retcon, I'm going to work this into Tenka's lore for those 5 of you who care about my characters notes, or if you even bother to read the description in the first place.

As much as I love the look of Shiny Charizard's black scales, I liked the way the normal color of Mega Charizard X with its blue flesh and blue fire looks against its black scales.

And then I thought to myself "What if that color was Tenka's default color?" and thus, this redesign was born.

With my Kobold lady Jia Jing Fei around, I have wanted to make Tenka blue to make her stand out from Jia, but also other Charizard characters.

I'm really proud of this piece, Tenka looks the best she ever has, and with the newer blue details around her face and horns, her face no longer "disappears" in her jet black scales.

Tenka has also been slimmed down and gained some muscles to her.

Not to mention I love her blue clothing, it makes Tenka look very regal like The Crownless Queen she is stated to be.

If you were to tell me that after some seriously intense training sessions with Tetsuo would end up with me turning into this; I wouldn’t believe you.

I should start from the beginning.

It had been 7 long years since my family and I had done any traveling to compete in Pokemon Leagues.

We lived life for a little while and just enjoyed ourselves; only really training just enough for the World Tourneys in Driftveil City.

I must admit, I did let myself go a little…

The “Motherly Lifestyle” as Tetsuo called it, was something I fell too cozily into.

So not pleased with my doughy body, I wanted to get back into shape; especially once I got news of the Galar League starting up soon this late Autumn.

I went to Tetsuo since he would provide more than enough of a training partner to get me back into shape fast.

Our sparing was fantastic, as for as rusty my skills where, I could still keep up with Tetsuo for the most part.

We keep this up for 4 weeks while training with Orchid and Hunny occasionally.

And then it happened, the day Tetsuo and I sparred in our Mega Evolution forms.

This “sparing” kinda turned into 1st to knockout quickly as I know Tetsuo was taking this seriously now.

I haven’t seen the gleaming lust for battle in his eyes for a while now.

When we finished Tetsuo looked confused and said “Why in the hell did you turn Blue?”

I looked in the mirror to see that I took on the look of my Mega Evolution, yet wasn’t Mega Evolved at all.

Richie called a special Unovan doctor named Mitchell Mahogany to check if I was okay.

He specializes in Dragonic Pokemon and Mega Evolution side effects.

Dr. Mahogany told me not to worry and begin to observe me.

With the testing done it brought up some changes to my body.

Turns out that my body reached “the next natural evolution” as Dr Mahogany put it as my body absorbed my Mega Stone’s natural radiation, making me stronger without needing to Mega Evolved at all anymore.

This is an extreme rarity as only 1 in 777,777 Dragonic Pokemon could have happened in the first place; with that said number being higher for other Pokemon species.

In an odd thought, makes me wonder if this has to do with my loose ancestry to the Lords of Cinder that defended Unova from Kyurem many years ago.

I have a history book saying those Charizards were the 1st to ever achieve Mega Evolution in Unova.

Either way, I guess you can say that I am truly now “The Lady in Blue” both figuratively and literally.

I’m pleased that this new awakening has made me stronger!

I haven’t felt this good since Sinnoh!

Galar is so close now, and I can’t wait to show that Mr. Leon that his Charizard is no match for someone like me!