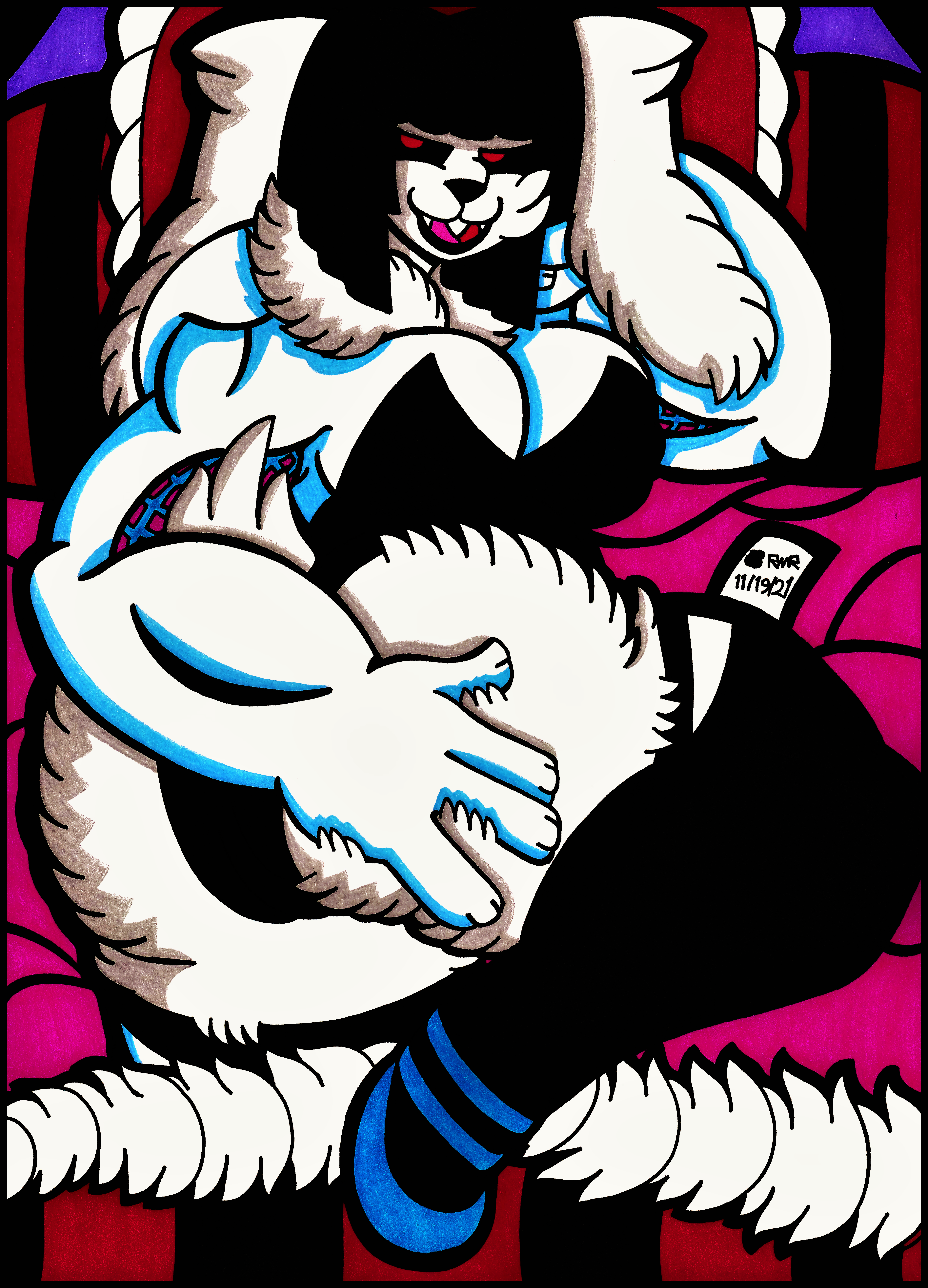 Here is one more Vivian, because I love her and I had another excuse.

This Tuesday on the 23rd is my friend Deathwatch116's birthday, and he has fallen madly in love with her since her creation.

He has spoiled me with a number of very wonderful commission this past year, so I wanted to give him something nice since I don't have the money to repay the favor.

He really likes Spider-Gwen, more particularly her outfit, so I figured it'd be cute to draw Vivian in Spider-Gwen's outfit.

Normally, I don't like to put white clothing on white fur, but I was able to use some different shading to differentiate between Vivian's fur and the Spider-Gwen suit.

And I also tweaked the outfit, but I wanted to show off Vivian's fat bunny ass since I needed to draw her from behind.

The pose itself wasn't as difficult to draw, honestly.

I followed the reference as closely as I could, with making sure I made Vivian's body constant to her 1st picture.

I'm really proud of this one, everything on Vivian turned out pretty much how I intended!

The anatomy looks consistence, Vivian is plump and sexy, and the light blue shading on the Spider-Gwen outfit actually looks excellent!

So, I hope you enjoy this piece, bro!

Well now, normally I would never play dress up like this, but, my little puppy has been proving himself to not only me and my generals; but to Valentine City itself.

I remember when Xanthos first came here, the boy had a backpack full of various things that he used to entertain himself.

Comic Books, new fangled little portable video game devices, a "How to Love your Bunny" guide which Paige managed to read through when Xan wasn't looking.

I'll be honest, with should a young and strapping Lycan man, that he was so secretly dorky.

But I don't see this as a negative, I've been alive for 3,000 years, and it's nice to be around a man that knows how to relax when work doesn't need to be done.

I poked around through his comics and I saw he has this fixation from this masked Arachnid Woman with some tight spandex and a hood as an accessory.

How ironic, as unmasked, this Arachnid Woman was also a bunny.

She has some deep dark chocolatey hazel color to her fur, while looked delightful against her creamy white outfit.

I looked up as many references as I could and would make myself an outfit for my own amusement, as well, to tease Xanthos over a little later.

I must admit, spandex is rather thigh, but it does feel amazing against my thick plush fur, and I adorable anything in black.

My thighs were a little too large to fit into the whole costume, so an adjustment had to be made in order to turn the leggings into stockings.

It fits better that way, honestly, and I know Xan loved it.

When he finally got to see me laying in bed with this outfit on, he couldn't have ripped his clothing off fast enough.

He put his hands all over me, feeling my body against the spandex itself.

I could hear his goans and moans as he felt me up as I teased him, rubbing myself against him.

The fact that this turned Xanthos on so hard was shocking to me, but at the same time, intoxicating.

Perhaps I need to go through more of Xan's little comics, with how much raw sexual energy he had last night, I'll need to find a way to bring that out a little more often.