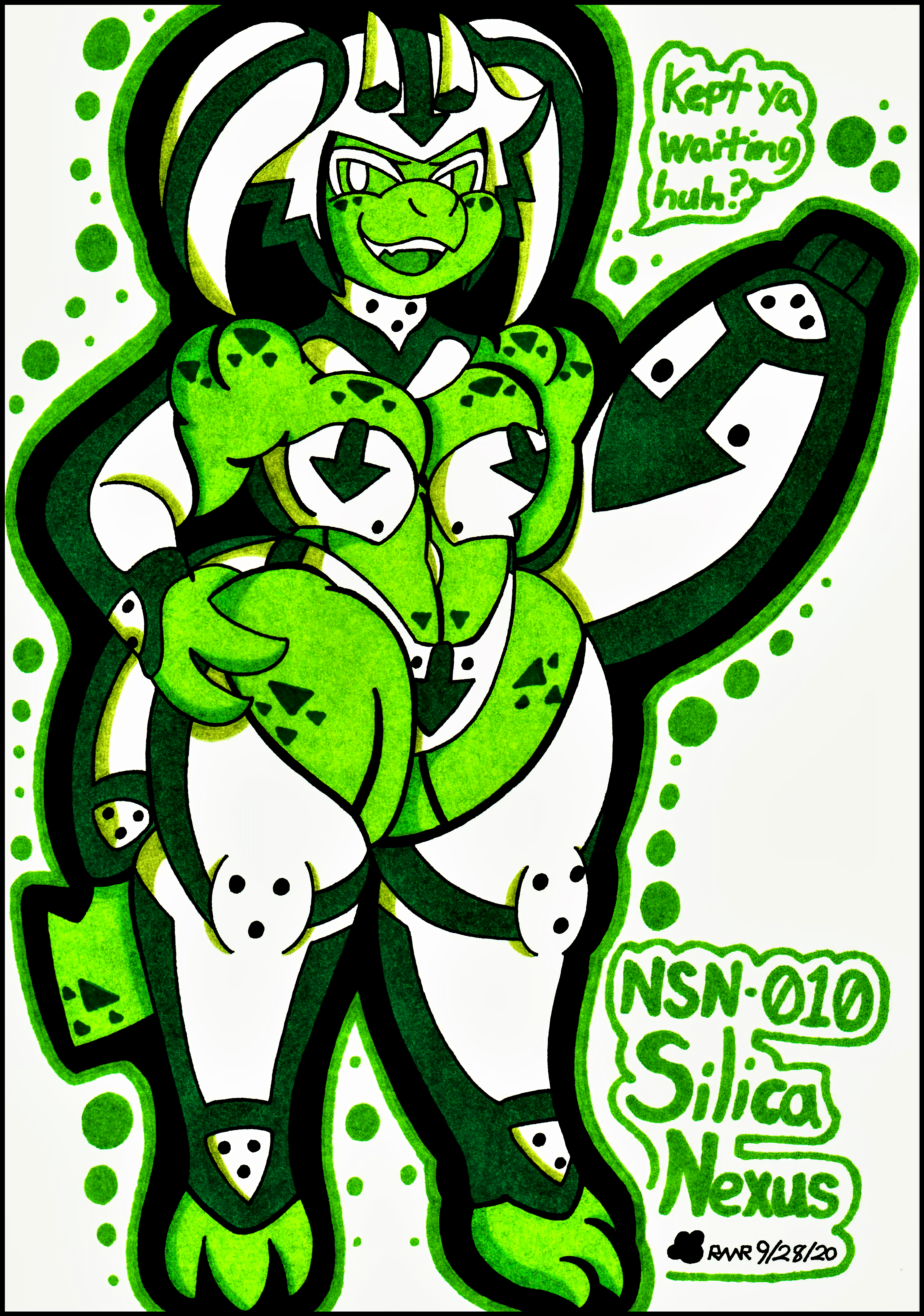 So after a year of putting it off, I finally was able to draw a picture of Silica Nexus that I liked.

But as you see, I have given Silica an update by turning her into a Kobold.

Well, I guess I just got bored with drawing Silica as a plain humanoid robot.

Originally this picture was going to be a Halloween Gag as a "What If Silica was a Kobold" but I ended up lovely the design so much that I figured I'd keep it.

Once I got back to Jia Jing Fei and her universe that kinda took up most of my time, so if Silica is a Kobold too, maybe I can actually start building her universe up too.

With that being I'm pleased with the end results, the proportions are too my liking, and I am really proud of the way the shading turned out.

Silica is still sassy, while still keeping most of her original aspects in check.

Her armor got a small redesign with the patterns itself, and her pigtails are just a little shorter than before.

To make Silica look more "Alien" I gave her only 3 fingers and 3 toes, while making them look like they can grab on to anything.

Lastly, freckles, because freckles are cute.

So yeah, I think Silica will stay a Kobold for the foreseeable future.

This allows Silica to transform her body parts into various amount of weapons (Mostly projectile weaponry).

Silica’s only limit is her imagination.

Silica Nexus is a Kobold Aniloid created by Nicolai Nexus, a genius in robotics.

Originally, Silica was to be the 6th member in his previously created Special Forces team; The Polymorphic Rangers.

However, with their massive success in deadly missions Dr. Nexus decided to keep Silica’s fighting prowess turned off to allow her to live a normal civilian life.

Silica enjoyed being a normal woman, but with the recent activities of violence happening in Devol City this made her think twice about civilian life.

The terrorist group the Cyber Syndicate where the ones behind all the recent attack, with their leader Theodore “Mad” Thorn; Dr. Nexus' former student.

What made matters worse, was that Mad Thorn kidnapped and reprogrammed Dr. Nexus’ previous creations and turned them against Devol City and the rest of the planet.

Silica begged for Dr. Nexus to turn on her combative capabilities in order to fight against the new threat.

At first Dr. Nexus was hesitant, not wanting to drag Silica into a battle that has no true outcome.

However, he could not but help to take Silica’s shining courage as a sign that she could make a big difference.

Within one week all of Silica’s combative abilities were turned online and further upgraded with more recent tech.

Silica Nexus now operating at her full capacity swears to protect Devol City from the attacks of the Cyber Syndicate, Theodore Thorn and hunt down the rest of Dr. Nexus’ corrupted creations.

Silica is primarily extremely courageous and just, choosing to give up her civilian life and face the threat Mad Thorn and the Cyber Syndicate posed because she wanted to help and do the right thing.

That being said, despite her being built for the sole purpose of combat, she tends not to like needless and senseless violence.

She always tries to find an alternative to violence if she can.

However, when diplomacy fails, Silica will not back down from a threat, and will make sure it’ll be a fight to not forget.

That being said; Silica being a Bounty Hunter and gaining experience, she has developed quite the sassy streak.

Silica’s small frame and “nonthreatening” will cause her opponents to underestimate her greatly.

Often time Silica will this to her advantage as Silica will trash talk her opponents in order to anger them into making mistakes.

While Silica doesn’t need to do this, she gets a sense of pleasure out of doing it after so long.

On her downtime, Silica can be found in Nexus System Inc, relaxing in her room and helping out Dr. Nexus when he and his team need a helping hand.